Alpha, beta, gamma rays radiation in radioactivity is the spontaneous radioactive decay of atomic particles in the form of energy or electromagnetic radiation. Among these three, alpha and beta particles are deflected by the magnetic and electric field but gamma rays are made by electromagnetic waves with very small wavelengths. The charge, mass, velocity, and penetrating properties of alpha, beta, and gamma particles, or rays are different. 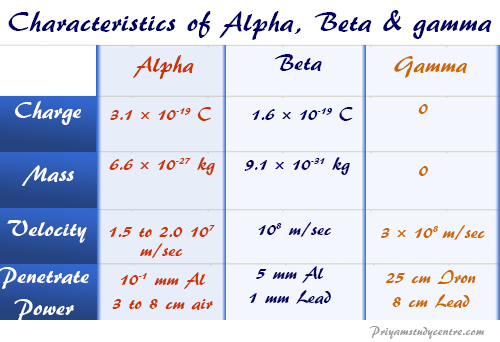 The emission of alpha-beta and gamma rays from different radiation sources is independent of pressure, temperature, pH scale, and specific heat of the surroundings. This is due to the activation energy for radioactive radiation being zero. The radioactive decay of alpha, beta, and gamma rays follows the first-order chemical kinetics and the half-life is independent of the amount of the sample.

Checking the periodic table we concluded that the daughter element is an isotope of thorium.
92U238 → 90Th234 + 2He4 (alpha-ray)

What is a beta particle?

Beta particle also called beta ray or beta radiation (symbol β) is the stream of negatively charged particles. From the study of deflection in a magnetic or electric field, the properties of a beta particle are identical to an electron. Therefore, the e/m values of beta ray beta ray or electron = 1.77 × 108 coulombs/g.

Difference between beta particle and electron

Although beta particles and electrons are identical in their electrical nature and charge/mass ratio. The fundamental difference between them,

What are gamma rays?

How are gamma rays produced?

Curies and Rutherford discover another mode of nuclear transformation rather than alpha, beta or gamma rays. This involves the ejection of a positron from within the nucleus.

The emission of positron lowers the atomic number one unit but leaves the mass number unchanged.
51Sb120 → 50Sn120 + +1e0 (positron)

According to the principle of conservation of energy or angular momentum, breaking down a neutron into a proton and beta particle creates a problem. Particles like neutron, proton, and electron have the spin angular momentum = ± h/4π each.

What is chemical reaction?

Chemical reactions involve some loss, gain, or overlap of an outer orbital electron to form a chemical bond. It can be changing the oxidation number or state of the reactant and product atoms. Such reactions cannot alter the composition of the nuclei. Therefore, the atomic number of the reactant elements remains unchanged after a chemical reaction.

What is nuclear reaction?

The nuclear reaction involves the radiation of alpha, beta, or gamma particles or rays from inside the nucleus which changes the atomic number of participating elements. In some artificially induced nuclear reactions, the neutron is absorbed by the target nucleus to produce an isotope. Therefore, the nuclear reaction leads to the birth of other elements or produces an isotope of the parent element.

Difference between nuclear and chemical reactions

Nuclear reactions are different from chemical reactions in the following respects,