Borax or borax powder chemical name sodium tetraborate decahydrate having chemical formula Na2B4O7, 10H2O, or Na2[B4O5(OH)4], 8H2O is used widely for the preparation of flux, glazes, and hard glass in India, Egypt, Rome, and other ancient civilizations. Borax is an important inorganic compound of the chemical element boron. It is isolated in 1808 by Sir Humphry Davy, Joseph Louis Gay-Lussac, and Louis Jacques Thenard. 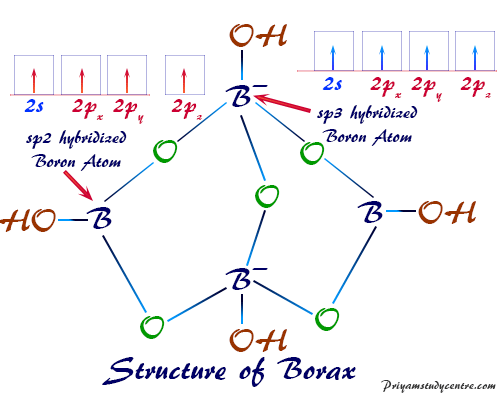 The heating of crystalline solid borax first swells due to losing the hydrated water but on further heating anhydrous substance gives meta-borate and boron trioxide. The physical properties or chemistry of borax are very similar to boric acid. It is obtained by heating boric acid solution with sodium carbonate.

Where borax can be found?

Borax powder is an important chemical compound of boron found in pesticides or insecticides to kill ants or roaches, antiseptics or mouthwash in medicine, cleaner solution or water softener, and enamel. It was first discovered in dry lake beds of Tibet and imported to Europe for refining.

What is used in manufacture of borax?

Boiling the mineral colemanite with an alkaline solution of sodium carbonate uses for the preparation of crystalline solid powder of sodium tetraborate decahydrate.

Calcium carbonate is filtered out from the solution. The concentration of filtrate deposits crystals solid Na2B4O7, 10H2O. Another solution containing metaborate (NaBO2) is again used for the conversation of Na2B4O7, 10H2O by passing carbon dioxide (CO2).

It is also obtained by chemical reaction or heating of boric acid solution with sodium carbonate with specific heat. It can be crystalline by cooling the solution.

At 62°C, it contains five molecules of hydrating water in its molecular structure. An aqueous solution shows alkaline properties due to hydrolysis. It reacts with water to form the substitute boric acid (H3BO3). It is a weak acid tritiated against strong acids using methyl orange as an indicator at pH scale 3.1 to 4.4).

When we heating borax first swells due to the loss of hydrating water but further heating produced the chemical compounds metaborate and boron trioxide.

The fusion of borax with metal oxides like copper, iron, cobalt, nickel, or chromium oxide forms a bead of metal borate that looks like a characteristic glossy color. It is used in chemistry for the quantitative chemical analysis of metal salts. This test is known as the borax bead test. 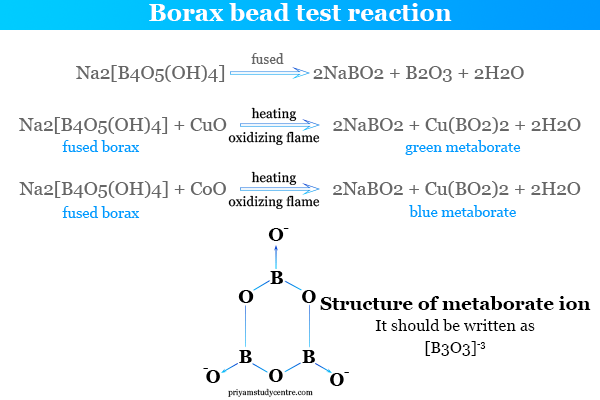 The fusion of borax with metal ingredients like copper oxide (CuO) in an oxidizing flame defines blue cupric metaborate but in reducing flame it defines dull red cuprous metaborate.

What is borax used for

What is Ionic Bonding? Ionic bonding is the electrostatic force that binds together oppositely charged ions formed by the transfer of electron or electrons from...