What is crystal lattice?

Crystal lattice or cubic crystal lattice is formed by the orderly arrangement of atoms, ions, or molecules in space or a three-dimensional system. For every crystalline solid, there are three or four lattice planes whose spacing reveals the position or points of the constituents. 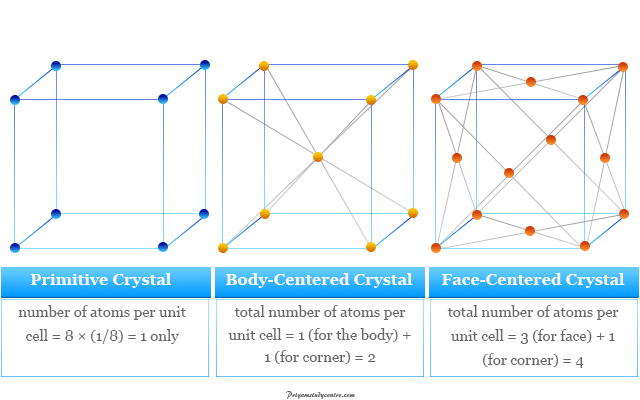 In learning chemistry or physics, Braggs developed the very simple but useful relation between the wavelengths of the electromagnetic spectrum of x-rays and the spacing between the crystals lattice planes,
nλ = 2d sinθ
where n = 1,2,3, etc
d = distance between the lattice planes

Braggs also developed the character of the line spectrum formed by x-rays which use widely crystallographic studies.

What are unit cells?

For example, cubic sodium chloride formed by ionic bonding, and (100), (110), or (111) planes give the required information about crystal lattice. 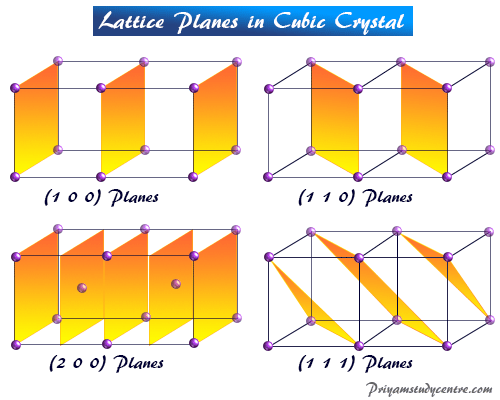 The space lattice is divided into a large number of small symmetrical units when similar points are connected by sets of parallel lines along the three dimensions coordinate axes. These basic units of the space lattice are known as unit cells.

What is Bravais Lattice?

Bravais in 1848 shows that all 14 classes of arrangement define all possible forms of the crystalline solid like borax, boric acid, diamond, metallic crystals, etc.

The cubic, tetragonal, orthorhombic, and monoclinic systems have more than one kind of arrangement of the constituents atom, ion, or molecule. These 14 unit cells originated from seven crystal systems known as the Bravais lattice.

In sodium chloride, the sodium atom losses one electron by ionization to form a sodium ion, and the chlorine atom has electron affinity to gain this electron particle to form a chloride ion. They bind each other by the electrostatic force of attraction to form the ionic body-centered cubic sodium chloride crystal with the liberation of the lattice energy.

In a simple or primitive cubic crystal lattice where atoms are present at the corners only. Each atom is equally shared by eight atoms because each cube contains eight corners.

The body-centered atom belongs exclusively to the unit cell. Therefore, the total number of atoms per unit cell,
= 1 (for the body) + 1 (for corner) = 2

The alkali metals like lithium, sodium, potassium, rubidium, and cesium in the periodic table are formed by body-centered cubic lattice. This type of cubic crystal system possesses one atom at the center and eight atoms at the corner of the cube.

In cesium chloride, the body elements and corner elements are different. All the chlorine ions are at the corner and cesium cation is at the center of the cubic crystal or vice versa.

In a face-centered cubic lattice where the atoms are present at the six faces and the eight corners. But face atoms are equally shared by two unit cells.

The intercepts of any plane along the three crystallographic structures are either equal to the ratio of the unit cell or some integral multiple of them. This is known as the law of rotational indices.

What are miller indices?

In learning chemistry, let one plane cut two three-dimensional axes by a and b and the third axis in infinity. Hence the Weiss indices = 1, 1, ∞.

For a better representation of the indexing plane, we avoided infinity by considering reciprocal values because infinity is inconvenient for determination. The reciprocal of Weiss indices is called miller indices.

How to calculate miller indices?

A cubic system is the simplest type of crystal system. Hence the intercept on the three-axis is equal and all the angles are equal to 90°.

In the simple cubic lattice, the points are at the corner of the cube. The planes that can pass through the lattice point have miller indices (100), (110), (111).

Types of Alcohol in Chemistry Types of alcohol uses for the manufacture of drinks or beer, vodka, and brandy is ethyl alcohol or ethanol. Many...