What is hydrogen peroxide?

Hydrogen peroxide molecule has molecular formula H2O2 having an interesting skew structural unit. It is used widely in industrial solutions and antiseptic or mouth cleaner in medicine. Due to the high oxidizing properties, it is used as a bleaching agent.

A liquid solution of H2O2 uses in textiles work, paper, pump, lather, and oil industry in our everyday life. Hydrogen peroxide is prepared by the electrolysis of concentrated sulfuric acid by the vacuum distillation process.

In hydrogen peroxide structure, two O-H planes lie perpendicular to each other but the solid structural formula is slightly modified by intermolecular hydrogen bonding. 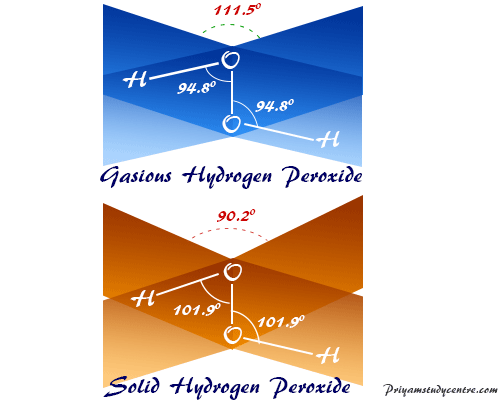 The valence shell electronic configuration of oxygen shows that pz-orbitals oxygen conation a single electron in each orbital in hydrogen peroxide molecule.

How to make hydrogen peroxide? 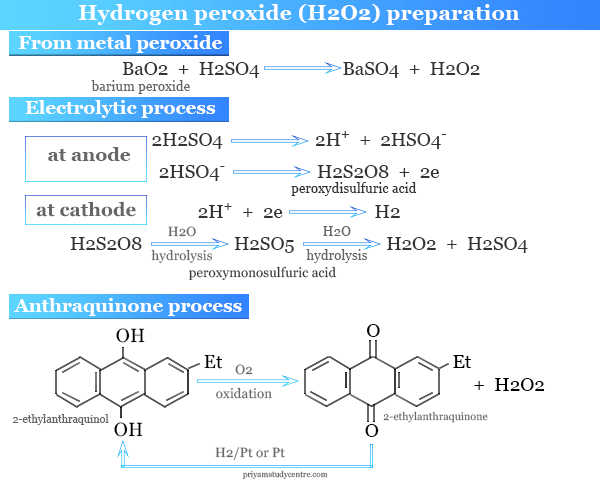 It may be made in the laboratory by reacting dilute sulfuric acid with crystalline solid barium peroxide (BaO2, 8H2O).
BaO + H2SO4 → BaSO4 + H2O2.

H2O2 formed from time to time by shaking with water. The quinone is reduced back to the quinol by catalytic hydrogenation.

Hydrogen peroxide is now manufactured by the oxidation of isopropanol liquid or vapour under high pressure (15 to 20 atm) at about 100 °C. It can be separated by fractional distillation.

Pure hydrogen peroxide molecule is an extremely pale blue liquid. It shows both oxidizing and reducing properties in acidic or basic mediums.

At the ordinary temperature or absence of a chemical catalyst such as silver or platinum, the decomposition is very slow.

The decomposition may be explosive at high temperatures. Therefore, it is kept preferably in polythene containers that stabilize like urea or phosphoric acid.

Hydrogen peroxide behaves like a weak dibasic acid. The pH scale value of H2O2 is lower than that of water. The second dissociation of hydrogen is very weak. It is cannot be protonated in an aqueous solution.

Hydrogen peroxide is a strong oxidizing agent in both acidic and basic mediums. The redox reaction potentials of H2O2 are given below the table.

Due to the high positive potentials of hydrogen peroxides, it can easily oxidize iron (II) to iron (III), bromide to bromine, and iodide to iodine.

In the presence of very strong oxidizing agents like chlorine or permanganate or dichromate in an acid medium, hydrogen peroxide oxidizes to oxygen. Therefore, it shows reducing property.

What is boric acid powder? Boric acid or Boric Powder, also called hydrogen borate or orthoboric acid is a white crystalline solid with the chemical...