Hydrogen is the only chemical element in the periodic table in which the valence electron under the direct influence of the nucleus or there is no shielding electron. It has the symbol ‘H‘ and the molecular formula H2.  The hydrogen molecule is a colorless, odorless, tasteless, flammable gas which uses in the earliest time for the production of water. 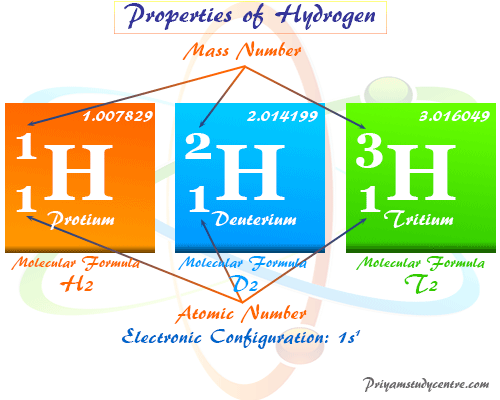 Hydrogen has the three isotopes having the chemical name protium (1H1), deuterium (1H2), and tritium (1H3). Atomic hydrogen has a very simple structural model. It contains one electron and one proton with atomic number = 1 and atomic weight or mass = 1.007829.

Under ordinary conditions, due to the presence of one valence electron in the 1s-orbital, it forms a wide number of common chemical bonding such as covalent, ionic, bridge bonds, and hydrogen bonding.

Where is hydrogen found?

In 1766 Henry Cavendish, an English chemist and physicist discovered the most combustible element or molecule like hydrogen. The name hydrogen was given from the origin of Greek words meaning ‘water maker’.

Position of hydrogen in periodic table 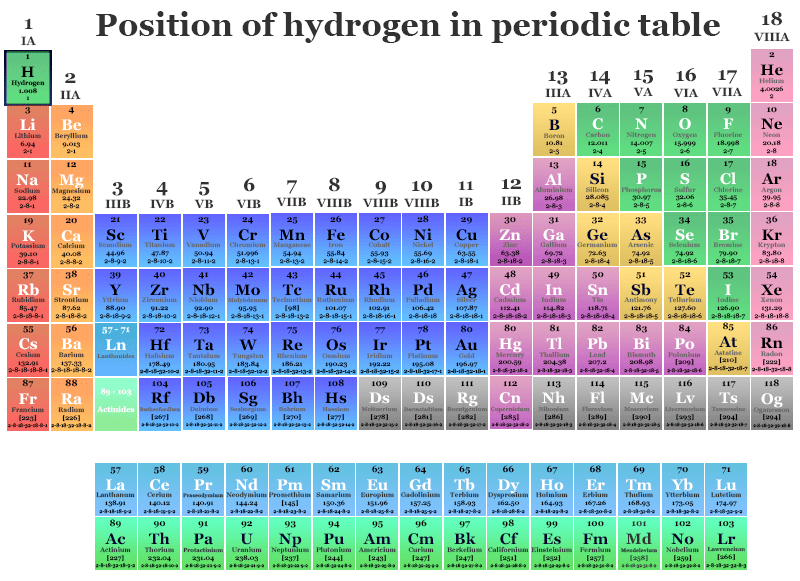 The most common oxidation number of hydrogen = +1, but due to unique characteristics, it also shows a −1 oxidation state to form LiH, NaH, CsH, and CaH2.

Hydrogen has the three isotopes having the chemical name protium, deuterium, and tritium and chemical formula 1H1, 1H2, and 1H3 respectively.

These three isotopes form three covalent gas molecules like dihydrogen, dideuterium, and ditritium. These isotopes are used as an alternative fuel for engines or renewable energy sources for our environment.

Hydrogen is a unique type of chemical element that does not found free in the earth’s atmosphere but is widely used in everyday life. The kinetic energy of H2 molecules at the earth’s temperature is sufficient to escape it from the earth’s gravitational energy. Therefore, the density of H2 decreases in our environment.

The half-life of the atomic form is nearly 1 second at 0.2 mm pressure. A huge specific heat (432.6 kJ mol−1) uses for recombination of atomic H. This process is used for high-temperature welding of tantalum and tungsten metals.

Due to high reactivity, it functions as a strong reducing agent. It reduces different types of common chemical compounds like ethylene, acetylene, hydrogen peroxide, and metal ions.

When the nucleus of an atom contains an odd number of nucleons, the nucleus has a resultant spin. If such two atoms combine to form a diatomic molecule, the nuclei may have their spin parallel or anti-parallel. It is called nuclear spin isomerism.

Such nuclear spin isomer is found in H2, D2, T2, N2, O2, etc. The conversion of para-H2 to the ortho-H2 compound is normally very slow. They involved the forbidden transition between two energy states of the different spin municipalities.

What is hydrogen used for?

Hydrogen and its compounds are widely used in the different types of fuel cells and industrial production processes. The most common uses of hydrogen are given below,

What is carbon? Carbon is a nonmetallic chemical element of group-14 (IVA) in the periodic table with atomic number 6 and symbol C. It occurs...