What is nitric acid?

Nitric acid is a common laboratory reagent storage million tonnes of each year. The freezing point of HNO3 is −41.6 °C and the boiling point of 82.6 °C.

The concentrated water solution of HNO3 has properties of photochemical decomposition. It turns brown by absorbing liberating nitrogen dioxide (NO2).

Where to find nitric acid?

Nitric acid is manufactured by catalytic oxidation of ammonia (NH3) by the Oswald process or distillation of sodium or potassium nitrate with concentrated sulfuric acid. It is a pollutant of our environment that causes acid rain or snow.

In learning chemistry, the gas phase nitric acid (HNO3) has a planner structural formula but the nitrate ion has a planner symmetrical structure with a negative charge on resonance hybrid. The same general structure holds probably in solid forms of HNO3. 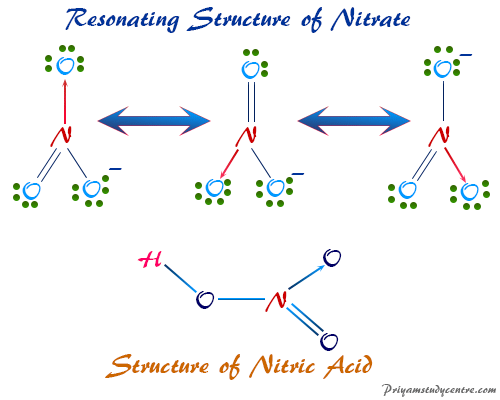 In the laboratory, nitrogen dioxide can be produced by the thermal decomposition of copper(II) nitrate. It can be passed through water to produce nitric acid.

Alternatively, 50 g of potassium nitrate (KNO3) and 25 ml of concentrated sulphuric acid are taken in a round bottom flask in the laboratory. It can be heated to about 200 °C to produce HNO3.
KNO3 + H2SO4 → HNO3 + KHSO4

Ammonia undergoes different types of oxidation reactions under various conditions. For example, in the air, ammonia reacts but little to form nitrogen. In pure oxygen, it burns to form nitrogen and water.

Over a hot platinum gauze chemical catalyst, the mixture of ammonia and air (1:7) oxidized mostly to form nitrogen monoxide. The liberated specific heat keeps the catalyst hot. The heated nitrogen monoxide cooled and mixed with oxygen to get nitrogen dioxide.

It passed into warm water or soluble under pressure to yield a 60 percent dissolved solution of nitric acid. Commercially available concentrated HNO3 is 98 percent concentrated. Fuming HNO3 contains additionally dissolved NO2 with a yellow colour.

Pure HNO3 is a colourless liquid. The pure or concentrated aqueous solutions of nitric acid have the properties of photochemical decomposition with a very high dielectric constant, a good ionizing solvent for electrolytes. It is a powerful oxidizing agent for oxidation.

A dilute aqueous solution of  HNO3 (molarity below 2M) behaves like a strong acid with little oxidizing power. Dissociation is nearly 93 percent at 0.1M concentration. Only magnesium and manganese liberate hydrogen from the dilute solution of HNO3.

If the concentration is greater than 2M, HNO3 is a powerful oxidizing agent.

The mixture of concentrated HNO3 (3 volumes) and concentrated HCl (1 volume) is known as aqua regia. Aqua regia is a powerful oxidant due to the presence of free chlorine and NOCl

What is nitric acid used for?