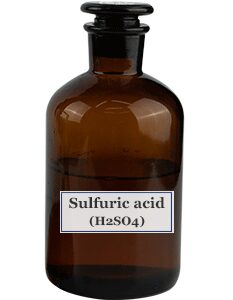 It is called the oil of vitriol because it is prepared by roasting green vitriols or iron (II) sulfate. Commercially, it is manufactured by the contact process.

Oleum or fuming sulfuric acid gets by dissolving sulfur trioxide (SO3) gases or vapors in a concentrated H2SO4 solution. In chemistry laboratories, it is always diluted by slowly pouring water with stirring. Concentrated 98 percent of sulfuric acid uses as an effective dehydrating or dissociation reagent with strong oxidizing properties.

Annual about 150 million tons of production of sulfuric acid from different sources in the whole world. It leaves 250000-ton sulfur per year in our environment which is responsible for producing pollutants like acid rain or snow in the earth’s atmosphere. 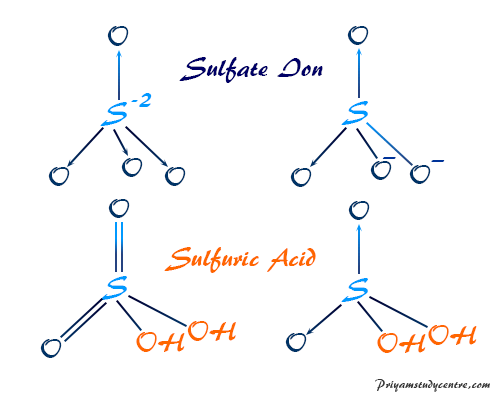 Anhydrous sulfuric or pure sulphuric acid is a colorless, heavy, viscous liquid with a high dielectric constant. It has a very weak pH level and neutralized with strong bases like sodium hydroxide or potassium hydroxide.

The molecules are bound by strong hydrogen bonding in both the liquid. Solid form producing hydrogen ions or protons in a water solution with several ionization constants presented as,

In learning chemistry, due to the low pH scale of sulfuric acid, it always dilutes by slowly treatment with water by stirring but reverse addition may cause explosive of the acid mixture by the stream formation. At low temperatures, this forms of H2SO4 several crystalline solid hydrates.

The contact process or chamber process is used for the manufacture of sulfuric acid based on the oxidation of SO2 to SO3 with the vanadium pentoxide chemical catalyst promoted by potassium sulfate,
SO2 + ½O2 → SO3 ΔH0 = − 98 kJ mol−1.

The conversation was affected in four stages and worked best around 450 °C to 550 °C.

The sulfur dioxide produced in the contact process is absorbed by 98 percent concentrated H2SO4. The fuming nature of the substance or oleum is produced by dissolving sulfur trioxide in a concentrated sulfuric acid solution.