Krypton is a chemical element, inert gas, or noble gas of Group 18 of the periodic table with the symbol Kr and atomic number 36. It occurs in trace amounts in the earth’s environment and is used with other rare gases in fluorescent lamps. 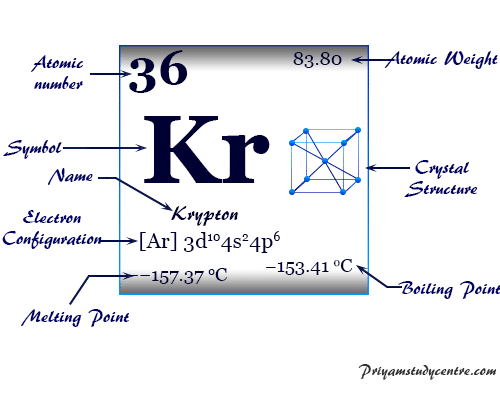 Krypton is a colorless, odorless, tasteless, monoatomic gas that forms a few numbers of chemical compounds with fluorine. Due to the filled valence orbital, the oxidation number or state is zero but with fluorine, krypton shows a +2 oxidation state also. It is placed in the p-block of the periodic table with group members helium, neon, argon, xenon, and radon.

Krypton was discovered in 1898 by the British chemists Sir William Ramsay and Morris W. Travers and the name of the gas was derived from the Greek latter kryptos meaning hidden.

The electromagnetic spectrum analysis of Krypton is characterized by several sharp emissions of green and yellow lines in the spectrum. In solid-state, it forms a face-centered cubic crystal lattice, and the cubic close-packed structure is the most space-economizing.

The rare gas, Kr has valence shell electron configuration [Ar] 3d10 4s2 3p6, and heat capacity ratio (Cp/Cv) close to 1.66. It occurs in the earth’s atmosphere to the extent of 0.0001 percent and is obtained by low-temperature distillation of liquid air. 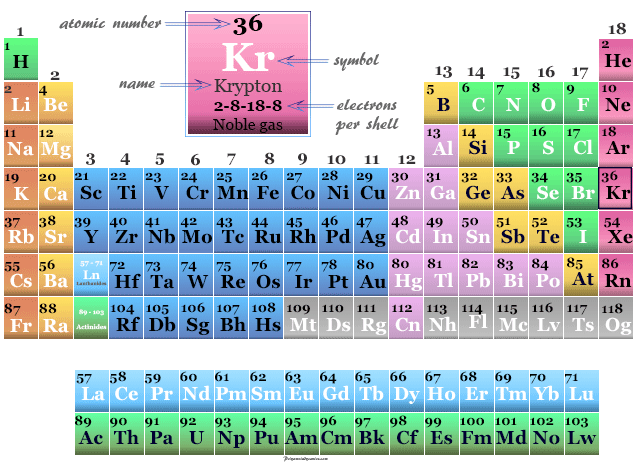 The chemistry of krypton or other noble gases like helium, neon, and argon is different from other elements of the periodic table due to their filled valence shell configuration and high ionization energy. But it formed a few unstable chemical compounds with fluorine along with clathrates or cage compounds. The clathrates or cage compounds are formed mainly with water and para-quinol by trapping krypton molecules in the hydrogen bonding network.

The only known unstable halide compound is krypton difluoride (KrF2). The rare gas compound, KrF2 may be prepared by passing an electric discharge through a mixture of krypton and fluorine molecules at low pressure in a U-tube immersed with liquid oxygen. It is also formed by the action of OF2 on Kr in presence of sunlight.

The chemical compound KrF2 is less stable than XeF2 and dissociated into Kr and F2 at room temperature. KrF2 uses a fluorinating agent that fluorinates xenon or noble metals like silver and gold. A mixture of KrF2 and XeF2 fluorinated many trivalent lanthanide compounds like LnF4, LnF7−3, and LnOF2, where Ln = Ce, Pr, Nd, Tb, and Dy.

A liner KrF2 has a similar structure to that of XeF2 with the Kr-F bond distance of 189 pm. The Kr-F bond energy is about 50 kJ mol−1, which is the lowest value of bond energy for chemical bonding formed by any element with fluorine.

It bonded to nitrogen in the salt, HCHKrF2+[AsF6]− which was made by reacting KrF2 with HCN+[AsF6]− in hydrogen fluoride solution.

Other nitrile adducts of krypton are also known, for example [RC≡NKrF]+, where R = Me, CF3, C2F5, and n-C3F5. Kr-O bond also presents in the thermally unstable compound like Kr(OTeF5)2.