Neon on the periodic table

Neon (symbol Ne), chemical element, inert gas, or noble gas of Group-18 of the periodic table discovered through its physical properties like electromagnetic spectrum. The colorless, odorless, tasteless, monoatomic neon gas is used widely in fluorescent lamps. It occurs to the extent of 18 ppm by volume in dry air and 5 × 10−5 ppm by weight in igneous rocks. 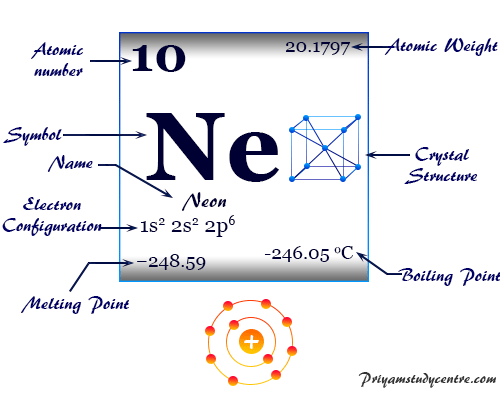 The name of the lighter gas, neon derived from the Greek latter neos meaning new. In solid-state, it forms a face-centered cubic crystal lattice.

English natural philosopher and scientist Henry Candavis 1785 observed that the small sample of air in the atmosphere contains a small volume of gas (1/120 part) even after repeated sparking with excess oxygen.

The inert gas, neon has the chemical symbol Ne, atomic number 10, and heat capacity ratio (Cp/Cv) close to 1.66. Due to the filled valence orbital, the oxidation number or state is zero. 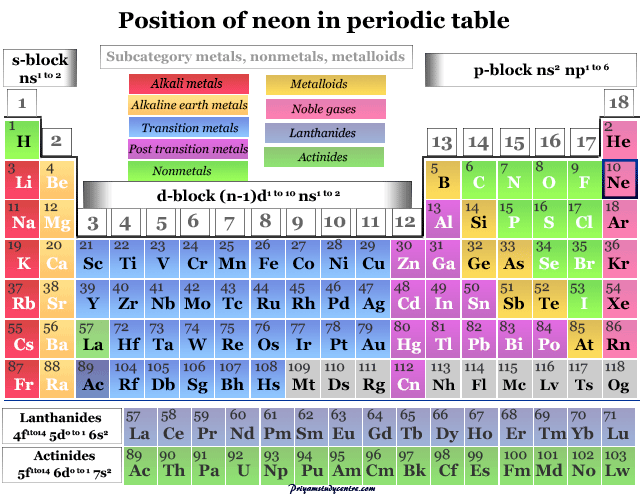 Where is neon found?

It is found to the extent of 18 ppm by volume in dry air and 7 × 10−5 ppm by weight in igneous rocks. Like other noble gases (helium, Argon, krypton), neon is mainly obtained as by-products of the liquefaction of air.

The rare gases can also be fractionated effectively by their preferential adsorption on charcoal at preferred temperatures. At −180 °C charcoal adsorbed argon, krypton, xenon, and radon. Worming the charcoal to −80 °C produced almost pure argon. After the adsorption of Ar and heavier rare gases, the lighter Ne and He is adsorbed at −225 °C.

Neon is the second-lightest noble gas after helium and contains complete valence s and p-subshells to make a very stable configuration. The energy required for the promotion of an electron to the next vacant orbitals is quite large.

Solid clathrate hydrate was produced from water ice and neon gas at high pressures and −30 °C temperature. The clathrate cannot be called a true compound since it is bounded through hydrogen bonding. The noble gas molecules freely move through the materials. The gas is liberated when heating.

The ionization energy is highest for all noble gases of the periodic table but they do decrease down the group. The facts indicate that if the noble gases show any reactivity, they are present at the lower position of the group.

What is neon used for?

Iodine element Iodine is a chemical element of Group 17 (VIIA) of the periodic table. It is a member of the halogen family with atomic...