Phosphorus is a nonmetallic chemical element of the nitrogen family or Group 15 of the periodic table with the symbol P and atomic number 15. They are collectively called pnictogen or pnictides from the Greek word choking. Phosphorus is a colourless, semitransparent, soft, waxy solid at room temperature that glows in dark conditions. 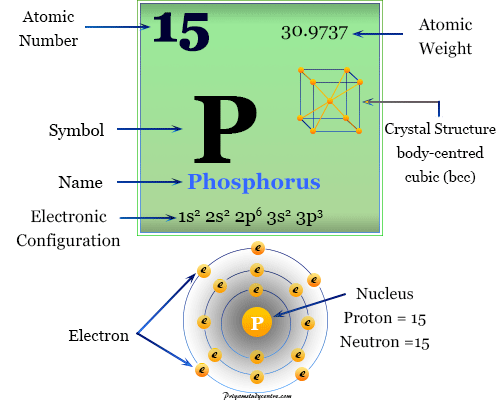 Nitrogen and phosphorus are essential constituents of the living body. Another heavier member of the nitrogen family, arsenic is extremely toxic and causes water pollution.

The phosphorus atom has 15 outer orbitals electrons and the nucleus contains 15 protons and 15 neutrons. The electrons are distributed as 2-8-5. Elemental phosphorus has several allotropic forms like white, red, violet, and black. In the liquid and gaseous state below 800 °C, it constitutes a tetrahedral P4 molecule. But above 800 °C, it forms a P2 molecule.

Phosphorus in the periodic table 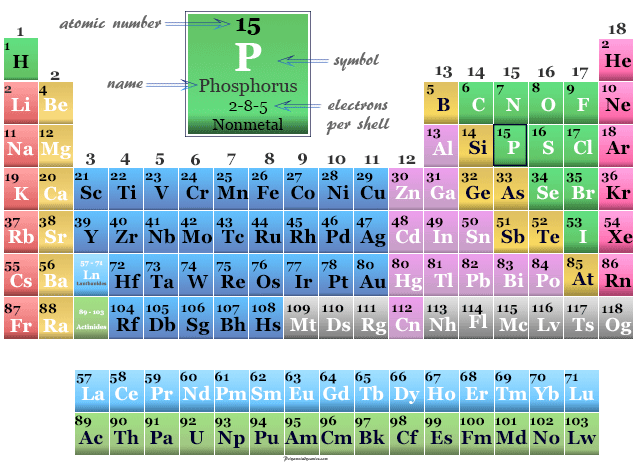 Where is phosphorus found?

Phosphorus is a highly abundant chemical element in crustal rocks (1120 ppm). It is not found free in nature but widely distributed in many minerals like fluorapatite, 3Ca3(PO4)2, CaF2. It is also found in the plant and animal bodies where it is an essential element for many biological systems.

Over 200 phosphate minerals are distributed in different countries of the world. Morocco, the United States, Australia, China, and Russia are the major depositor of phosphorus minerals.

It has 23 isotopes with mass numbers ranging from 25P to 47P. 31P is the only stable isotope of the element. 32P (beta ray emitter, t½ = 14 days) is the most important radioactive isotope obtained by (n,p) reaction on 32S or (n, γ) nuclear reaction on 31P in reactors. The radioactive decay of isotopes is extensively used in tracer studies.

The vapour is condensed under water molecules to form white phosphorus.

Elemental phosphorus has several allotropic forms. White, red, violet, and black are the main allotropes of the element.

The chemistry of nitrogen and phosphorus differs, in the same way as silicon differs from carbon due to the presence of an empty d-orbital. The electronic configuration of phosphorus is closer to the next noble gas than the preceding noble gas.

The formation of a +5 cation by losing five outer electrons is just impossible. A huge amount of energy is necessary for this purpose. The fact suggests that the sum of five ionization energy cannot be compensated by gaining lattice energy for ionic bonding. Therefore most of the compounds in the P(V) are covalent in nature.

Phosphine is the most common hydride of phosphorus with the chemical formula PH3. It is a volatile hydride formed by sp3 hybridization. Phosphine can be obtained by hydrolysis of metal phosphide. The thermal stability of the group-15 hydrides decreases rapidly with the increasing atomic weight of the parent element. The hydrides are less stable than the group-14 hydrides.

Due to the presence of vacant d-orbital, phosphorus formed two types of halides like trihalides (PX3) and pentahalides (PX5). All the covalent trihalides (PX3) have tetrahedral (sp3) structures with a lone pair of electrons residing in the fourth orbital of the atom.

The pentahalides contain a trigonal bipyramidal structure with sp3d2 hybridization and 10 valence shell electrons. The pentahalide like PF5 is a very strong Lewis acid, forming complex compounds with amines or ethers. The valence shell of the element also expands in octahedral complexes like [PCl6]− that contain 12 electrons with sp3d2 hybridization.

The structure of P4O10 is based on PO4 tetrahedra. P(III) oxide is formed when the element is burnt in a limited supply of oxygen. It is structurally similar to that of the P4 tetrahedron. It also formed a series of oxides P4Ox (x = 7, 8, 9).

Oxoacids of phosphorus are extensively used and commercially important chemical or biological compounds. It is a structurally complicated chemical. They are acidic protons bound to oxygen atoms, some have nonacidic protons that are bonded directly to phosphorus and some contain P-P chemical bonding.