Europium is a chemical element or rare earth metal in the periodic table with the symbol Eu and atomic number 63. It is the most reactive and softest rare earth metal that is stored under an inert fluid to protect it from atmospheric oxygen or moisture. 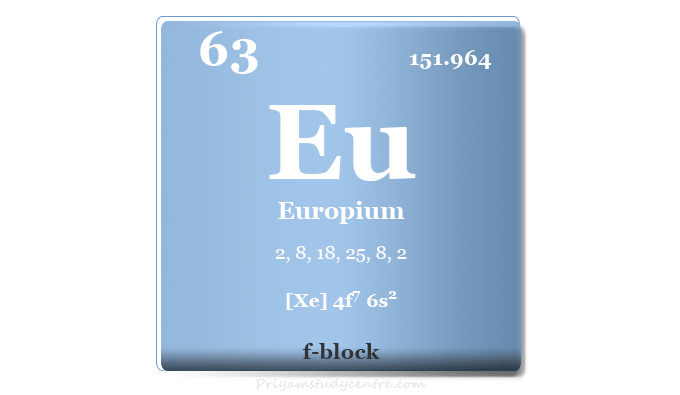 It is an excellent absorber for neutrons. Therefore it is widely used in control rods of nuclear power reactors. Europium is used as phosphors in euro currency notes, fluorescent lamps, color TV screens, computer screens, etc.

It was found in most of the minerals containing the other rare elements. Europium was first found by Paul Émile Lecoq de Boisbaudran but the credit of discovery was given to French chemist Eugène-Anatole Demarçay. He was able to isolate Eu in 1901. It is named after the continent of Europe.

Naturally occurring europium contains two isotopes 151Eu and 153Eu. The isotope Eu-151 is slightly more abundant but Eu-153 is more stable. It also contains 35 radioactive isotopes that can be prepared by various artificial nuclear reactions. The majority of these radioactive isotopes have half-lives shorter than 12.2 seconds.

The primary decay mode of europium isotopes is electron capture or beta decay. Like other lanthanides, various radioactive isotopes of Eu are produced during nuclear fission reactions.

Various properties of europium are strongly influenced by its half-filled electron configuration. The melting point and density of Eu are low among the lanthanides.

It is a ductile metal that adopts a body-centered cubic crystal lattice. The hardness of this rare earth metal is similar to that of lead. 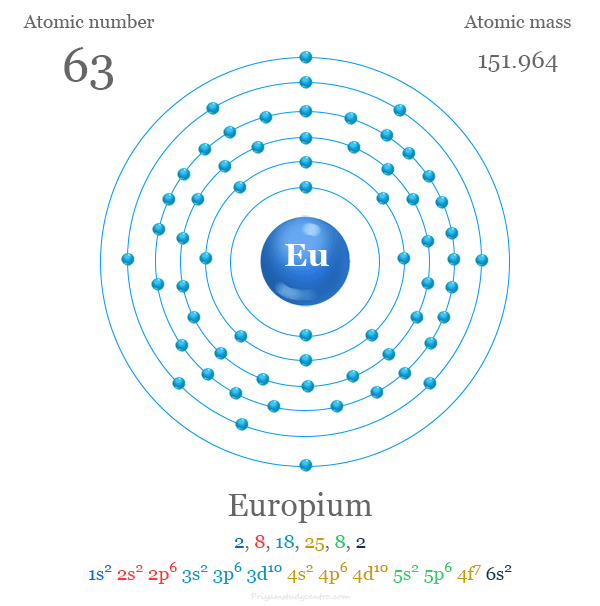 The 63 electrons of europium are arranged in the configuration of [Xe] 4f7 6s2. It loses two electrons to form a stable half-filled f7 configuration. Therefore, it shows a +2 oxidation state along with a +3 state.

Europium in the periodic table

The rare earth metal europium is placed in the f-block elements of the periodic table. It is a lanthanide that lies between samarium and gadolinium. 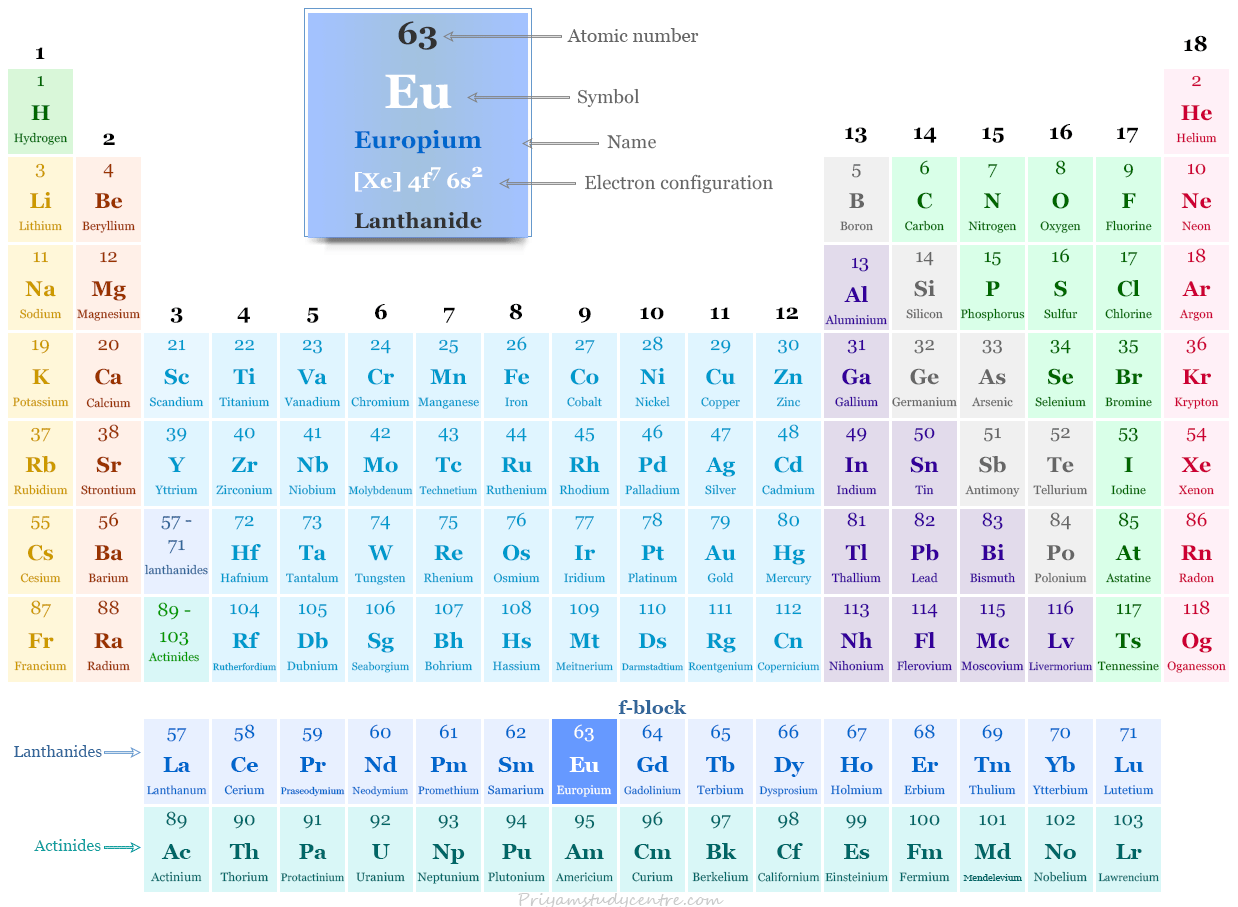 Europium is a highly electropositive and active rare earth metal. The reactivity of Eu with water is comparable to that of alkaline earth metals calcium.
2 Eu + 6 H2O → 2 Eu(OH)3 + 3 H2

The rare earth metal europium tarnishes slowly in the air by forming an oxide layer. Like other rare earth metals, it also burns in oxygen at 150 °C to form Eu (III) oxide.
4 Eu + 3 O2 → 2 Eu2O3

Like other lanthanides, europium is usually trivalent but it readily forms divalent compounds. In the +2 state, the valence shell electron configuration of the Eu+2 ion is [Xe] 4f7. The half-filled f-shell provides more stability for the Eu+2 ion. The most common chemical compounds of europium are given below,

It forms europium (III) and europium (II) oxides with the chemical formulas Eu2O3 and EuO. Eu (II) oxide may be prepared by the reduction of Eu (III) oxide with elemental europium at 800°C and subsequent vacuum distillation at 1150°C.

The oxide Eu2O3 is widely used as a red or blue phosphor in television sets and fluorescent lamps. Eu (II) oxide has semiconductor properties with a band gap of 1.12 eV.

Europium hydroxide is an inorganic compound with the chemical formula Eu(OH)3. It can be prepared by reacting metallic Eu with water. It decomposes to EuO(OH) at elevated temperatures but further decomposition produces Eu2O3.

The rare earth metal europium reacts with all the halogens like fluorine, chlorine, bromine, and iodine to form corresponding halides.

It forms Eu (III) and Eu (II) sulfates with the chemical formula Eu2(SO4)2 and EuSO4 respectively.

Europium (III) nitrate is a compound with the chemical formula Eu(NO3)3. It is obtained by dissolving Eu2O3 in dilute nitric acid.

The most common hexahydrate form is a colorless hygroscopic crystalline solid. It reacts with 1,3,5-trimesic acid to produce a coordination polymer under hydrothermal conditions.