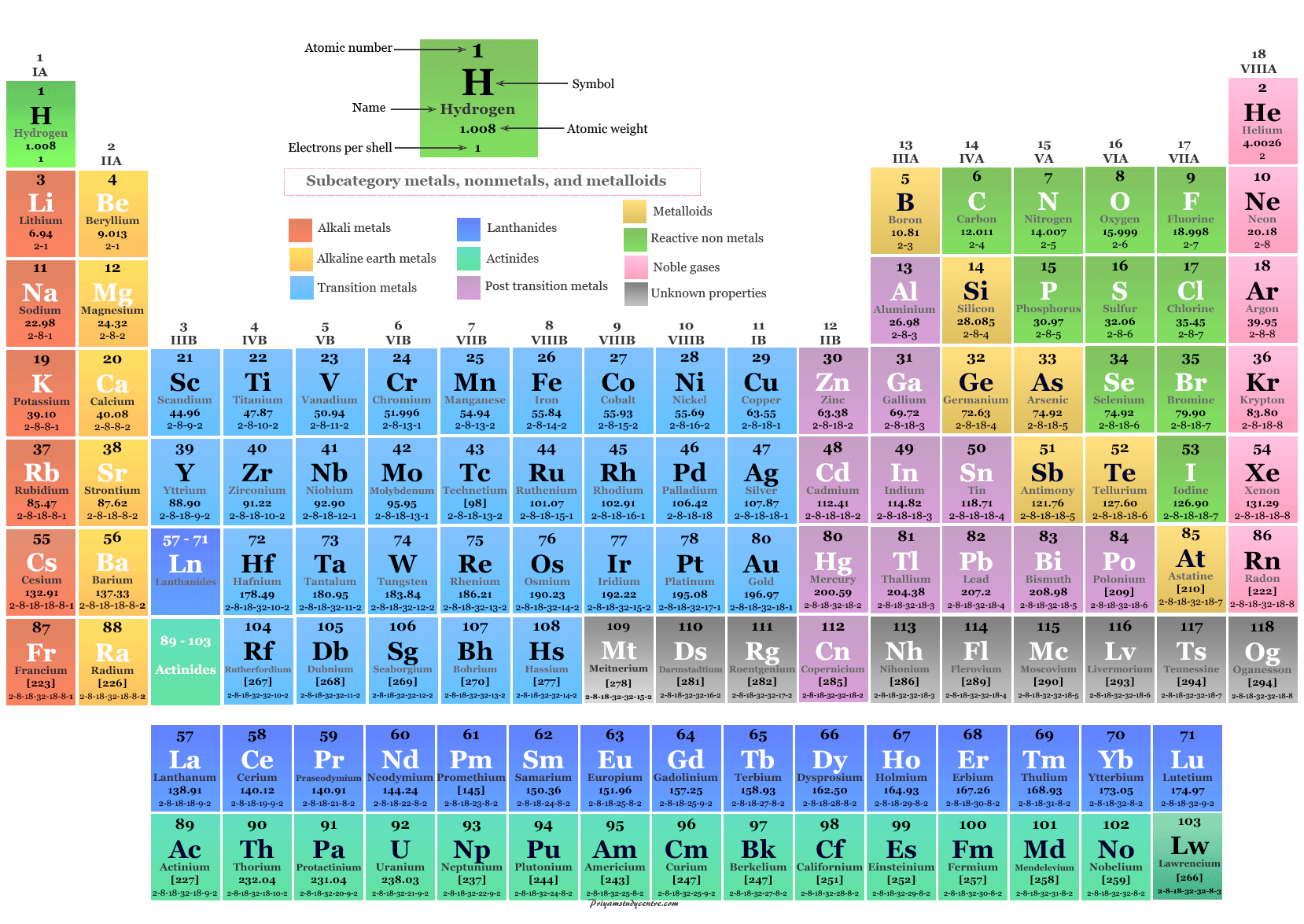 The modern law of the periodic table comes due to the breakdown of Mendeleev’s (1861) scientific classification on the basis of atomic weight or masses of the chemical elements. In the periodic table chart, the elements are represented by two parts, vertical columns (group) and horizontal rows (period) in chemistry or chemical science

The initial discovery explained by Dmitri Ivanovich Mendeleev in 1861 and Mosely in 1911 to the Bohr model or scheme suggested the scientific development of groups and periods of the periodic table elements.

The modern law of the periodic table suggested that the properties of chemical elements and their compound or molecule are the periodic functions of the atomic number.

According to the above definition and explanation, the long form of the periodic table is labeled into three units like left, right, and middle sections for learning chemistry or physics in science.

According to the modern periodic law based on the atomic number and valence shell electron arrangement of elements, the different types of metals and non-metals in chemistry are organized to form s, p, d, and f-block on the periodic table.

The name s-block element in the periodic table is given due to the arrangement of electrons, the valence electron enters into ns-orbital and is filled progressively according to the configuration rules.

P-block on the periodic table organizes by progressively filled p-orbital in valence shell electronic structure but helium is an exception with electron arrangement 1s2.

Therefore, 3d-block elements like scandium, titanium, vanadium, chromium, iron, cobalt, nickel, copper, and zinc are placed in the middle of the table between s and p-block with valence shell electronic configuration, 4s0→2 3d1-10.

The f-block on the periodic table is divided into two series, 4f or lanthanides and 5f or actinides which contain many missing elements discovered or synthesized by the nuclear reaction of radioactive isotopes.

Understanding the periodic variation of ionization energy, electron affinity, electronegativity, acid-base properties, and oxidation number in redox reaction of chemical elements are very important characteristics for any discussion or information in chemistry or science. In learning chemistry, we summarize physical and chemical properties along the group and period.

When we move down in a group, the size and electropositive character of atoms increases. The ionization energy usually decreases but in many cases increases due to shielding electron or effective nuclear charges. The lower member of crystalline solid metals like silver (Ag), gold (Au), cadmium (Cd), and mercury (Hg), the ionization energy increases.

Electronegativity and electron affinity generally decreases but sometimes apparent some exceptions. The electron affinity trend of the second-row chemical element in the periodic table is usually lower than the third row.

The pair of elements are arranged diagonally to each other in the period table to describe simple relations or chemical properties like the electric polarization of contents in chemistry. The diagonal pair like beryllium and aluminum have a similar change/size ratio since the size increases to the lower period while the charge increases to the right but this rule can not work completely for all the periodic table elements.

Interesting facts in the periodic table explain the common connection between electronic structure and periodically accommodation capacities purpose of chemical elements in short form. For example, 1s orbital can have only two electrons, hence period one contains only two elements.

Period-VI includes 6s, 4f, 5d and 6p orbitals in valence shell electronic structure with total of (2 + 14 + 10 + 6) = 32 elements from cesium to radon. The simplified scientific formula in chemistry uses to calculate the number of chemical elements in each period of the periodic table families.