What is Vitamin K?

Vitamin K is a fat-soluble vitamin that helps to make various proteins that are needed for blood clotting and the binding of calcium in bones. A deficiency of vitamin K lengthens the time of blood clotting because it is connected with the enzyme that is involved in blood clotting. 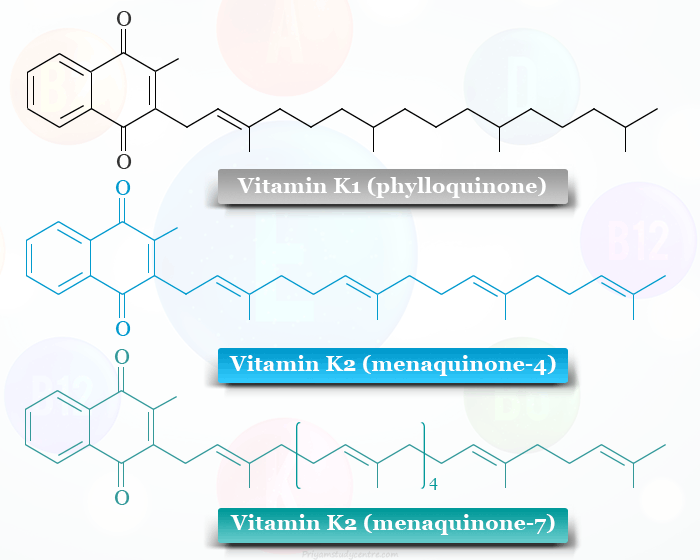 Vitamin K2 contains a number of related chemical subtypes with differing lengths of carbon side chains made of isoprenoid groups. The most studied subtypes of K2 are menaquinone-4 (MK-4), menaquinone-7 (MK-7), and menaquinone-9 (MK-9).

The vitamers are found in many food sources and sold as dietary supplements. It occurs throughout the body including the liver, brain, heart, pancreas, and bone. It is broken down very quickly and excreted from our body through urine or stool.

Vitamin K functions as a coenzyme for the K-dependent enzyme carboxylase for the synthesis of proteins involved in hemostasis (blood clotting) and bone metabolism, and other diverse biological functions.

In humans, vitamin K is involved in the carboxylation of certain glutamate residues in proteins to form gamma-carboxyglutamate (Gla) residues. Gla domains help to produce various proteins that are needed for blood clotting.

Procoagulant factors II (prothrombin), VII, IX, X, and anticoagulant proteins C, S, and Z are seven K-dependent proteins that are directly involved with blood coagulation in our bodies. Therefore, a deficiency increases the risk of excessive bleeding or hemorrhage.

An injection of vitamin K is recommended for all infants after birth to protect them from life-threatening vitamin K deficiency bleeding (VKDB) during the first few days and weeks of life. Generally, low levels of vitamin K in newborn infants are due to the following reasons:

Vitamin K is an essential micronutrient that helps to maintain your bone health, taking part in the carboxylation of many bone-related proteins, regulating genetic transcription of osteoblastic markers, and regulating bone reabsorption. Matrix G1a protein and osteocalcin are the main vitamin K-dependent proteins in our bones.

Osteoporosis occurs due to loss of bone density. It usually occurs after the age of 50 years when bone density starts reducing. Osteoporosis is common in menopausal women when their estrogen levels fall.

It progresses silently and causes many health problems if not treated. Various studies show that vitamin K reached foods and supplements help to maintain our bone density and reduce the risk of osteoporosis.

Benefits of vitamin K on skin

The antioxidant property of vitamin K promotes beautiful and healthy skin. It prevents the harmful effects of free radicals caused by exposure to smoke, environmental pollution, and the harmful UV rays of the sun. It can be used in a post-surgery cream formulation for wound healing and reducing swelling.

Apart from antioxidative properties, vitamin K is also involved in tissue renewal and cell growth control. These are important factors for healthy skin by maintaining a softer, glowing, and more young-looking. When your body produces new skin cells, the fresh and healthy skin cells will readily replace by older dry skin cells.

Like vitamin C and vitamin B3, it is beneficial for collagen production in your body. It is maintained your skin healthily and appears more, plump, smooth, and youthful looking. Therefore, your skin will be able to maintain its elasticity that preventing wrinkles and fine lines.

Vascular calcification is one of the risk factors for coronary heart disease in many peoples because it reduces aortic and arterial elasticity. Matrix Gla protein (MGP) is a vitamin K-dependent protein found in soft tissues such as arteries.

It plays an important role in the prevention of vascular calcification. Low dietary intake may decrease the production of anti-calcification protein (MGP) and increase the risk of arterial calcification and coronary heart disease.

Any abnormalities in blood clotting could affect blood loss during the menstrual cycle. Vitamin K deficiency is one of the many reasons that may cause heavy periods (or menorrhagia) because it is necessary for blood clotting.

Aside from blood clotting, it also affects estrogen metabolism in women during the menstrual cycle. Therefore, taking K-reached foods could be a beneficial home remedy for excessive period bleeding.

Vitamin K is beneficial for human health because it requires post-synthesis modification of certain proteins. These proteins are useful for blood coagulation, controlling the binding of calcium in bones, and other diverse biological functions in the human body.

Vitamin K includes two main natural vitamers vitamin K1 (phylloquinone) and vitamin K2 (menaquinones). The main type, phylloquinone is found in green leafy vegetables like collard greens, kale, and spinach. Another type, menaquinones are found in some animal-based foods and fermented foods made by the bacteria. 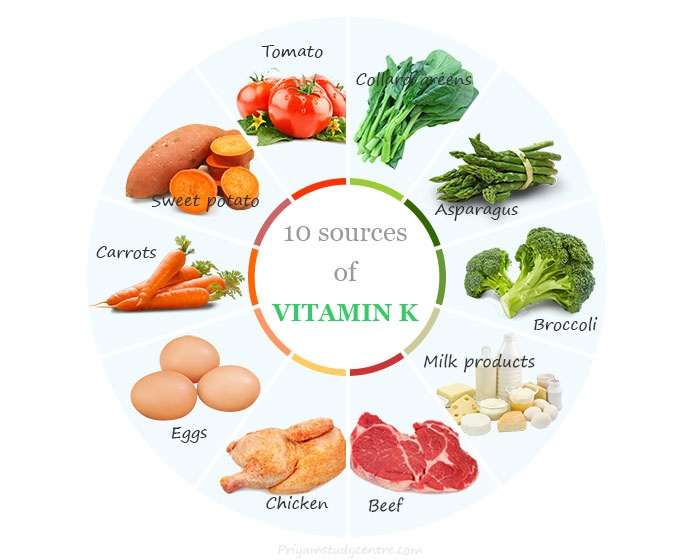 The most common sources of this vitamin in the United States diet are spinach, broccoli, iceberg lettuce, fats, soybean, and canola oil.

A high level of vitamin K1 is primarily found in leafy green plants and some other vegetables because it is directly involved in photosynthesis. Small amounts of K1 are found in animal-based food sources. It is the main form of vitamin K supplement available in the United States. The plants and animal-based sources of K1 may include:

Vitamin K2 is a group of compounds primarily obtained from animal-based food sources such as meats, cheeses, and eggs, and synthesized by bacteria.

Pant-sourced vitamin K1 covert MK-4 in various tissues in our body. Vitamin K2 is used by some people for treating osteoporosis and steroid-induced bone loss.

Most people get enough vitamin K from their daily diets and deficiency is uncommon in healthy children and adults. The recommended daily intake of vitamin K from food and other sources is given below in the table,

It is present in most multivitamins or multimineral supplements to maintain good human health. It is also available in dietary supplements containing only vitamin K or combined with calcium, magnesium, and vitamin D.

Vitamin K1 (phylloquinone) or a synthetic form of vitamin K1 (phytonadione) and vitamin K2 (MK-4 or MK-7) are used in dietary supplements to treat vitamin K deficiency. Various research shows that both phytonadione and MK-7 supplements are well absorbed, but MK-7 has a longer half-life.

The deficiency is uncommon for healthy children and adults because normal diets usually contain sufficient levels of this vitamin.

A clinically significant deficiency in healthy adults is very rare. The most common signs and symptoms of vitamin K deficiency may include:

Vitamin K deficiency bleeding (VKDB) is a problem that occurs in some newborn babies during the first few days and weeks of life. A deficiency of blood clotting proteins at birth increases the risk of bleeding in infants if they are not given vitamin K supplements.