What is Ribonucleic Acid?

Ribonucleic acid (RNA) is a polymer of ribonucleotides that help in protein synthesis and the production of new cells in our body. It involves the translation of DNA into proteins. RNA carries genetic information which is translated by ribosomes into various proteins necessary for cellular functions. Three types of RNA like tRNA, mRNA, and rRNA are commonly involved in protein synthesis. Each RNA has a specific function on protein biosynthesis. Ribonucleic acids can be hydrolysis by alkali or enzymes to form a mixture of ribonucleotides. The ribonucleic acid molecule is usually a single strand but one RNA and one DNA can form a double helix structure. It is called the hybridization of RNA. 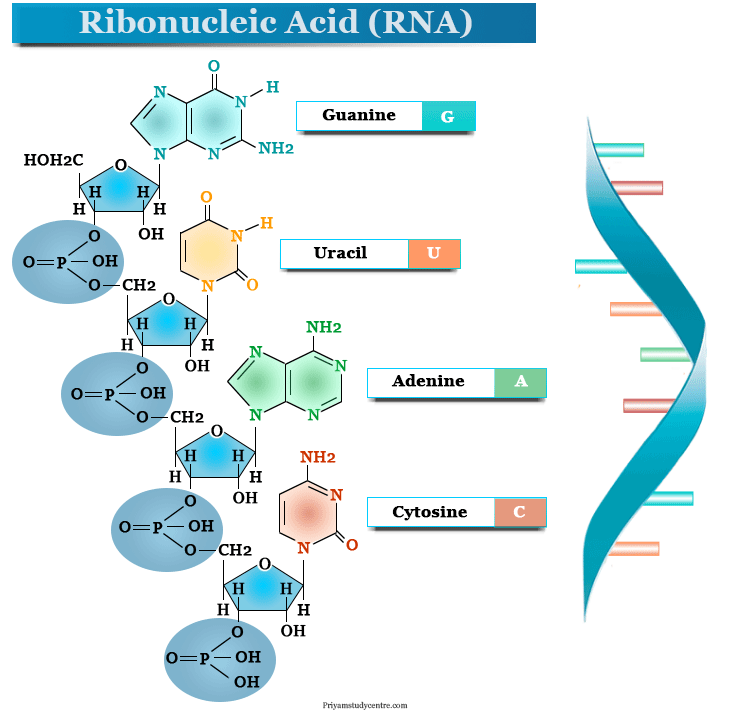 To elucidate the sequences of bases in RNAs are similar to those used in protein structure determination. End groups of ribonucleic acid can be determined by enzyme hydrolysis of ribonucleic acids with snake venom. The nucleotides of RNAs can be identified by chromatography technique.

The secondary structure of ribonucleic acid (RNA) has been investigated by x-ray analysis. The analysis indicates that RNAs exist as single strands which contain helical segments stabilized by hydrogen bonding. However, some RNAs also exists as double strands or double helical structure.

The ribonucleic acid which acts as a messenger or informational is called mRNA. In molecular biology, messenger ribonucleic acid (mRNA) is a single-stranded molecule of RNA which is complementary to one of the DNA strands of a gene. The information of the sequence of amino acids is transferred to the ribosome by mRNA.

Transfer ribonucleic acid (tRNA) is a type of ribonucleic acid molecule that brings the amino acids to the site where protein synthesis takes place. Each amino acid has its own specific tRNA which functions at specific sites in the ribosome during translation. The combination of two occurs at the one end of the tRNA molecule via a carboxyl group of amino acids. Hence the amino group in the bound amino acid residue is free.

The polyribosome is bound to two tRNAs where each of which is attached to its specific amino acid. The site of attachment of each tRNA to the mRNA is determined by the anticodon of the tRNA molecule. The anticodon is complementary to the codon of mRNA. Therefore, each tRNA having a particular anticodon is always attached to a specific amino acid. The combination of each amino acid with specific tRNA and charged tRNA to a specific site of mRNA is called translation. The genetic code specified in mRNA is now translated into amino acid sequences of its particular protein.

Ribosomal ribonucleic acid (rRNA) is a non-coding type of RNA which is essential to all cells. It is the structural component of ribosomes. Ribosomes contain approximately 60 percent of rRNA and 40 percent proteins by mass. The function of rRNAs is very similar for all species because the core function of the ribosome is nearly the same for different organisms. The actual sequence of the nucleotides in rRNAs does vary between species but the main function of rRNA is the same.