What is Chemistry in Science? 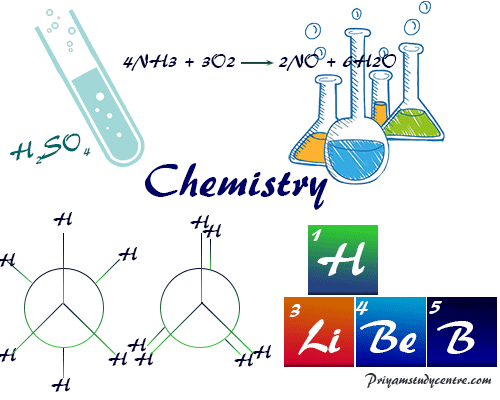 Chemistry, the main branch of pure science that deals with the physical or chemical properties, reactions, composition and, structure of atom or matter form by the element, interacts with the energy of the materials or substances for study or analysis of organic and inorganic compound or molecule. Different types of analysis and learning chemistry help to generate different kinds of perfect research topics which use in many fields of science like agriculture, medicine, environmental, etc. Inorganic, organic, physical, environmental, analytical are the basic branches of chemistry for the different classes of study and science analysis.

The molecular formula in chemistry gives the actual number of atoms of each class of inorganic or organic elements obtained by multiplying some whole number in the empirical formula. The whole number in chemistry obtained from the molar mass or mole number and in many cases, the whole number is one. Many standard analytical methods like vapour density, the elevation of boiling point, depression of freezing point used in science for the chemical analysis of organic and inorganic substances. The above standard example in chemistry help mainly with the general chart of molecules. But other physical methods like Graham’s law of diffusion, sedimentation, the viscosity of liquid and gases, osmotic pressure, X-ray radiation analysis, mass or atomic spectrum used for substances that contain high molar mass.

Physical chemistry is the part of science where we study general definition, law, principle, properties, mathematical equation, or formula related to the atom, molecule, or matter. Therefore, the physical part of science or chemistry deals with the topics, properties of solid (amorphous and crystalline solid), gas (ideal and real gas, critical temperature), liquid, thermodynamics law of energy conservation, heat (molar or specific heat), chemical equilibrium, chemical kinetics, chemical catalyst, etc. But the study of physical chemistry is incomplete if the student confines himself only to the theoretical information, he must gain the practical explanations of the theory, definition, problem, and solution.

What is Analytical Chemistry in Science?

Analytical chemistry meaning the analysis of the chemical formula, structure, composition of the atom, molecule, or matter in chemical, forensic, medicinal, and food science and technology. However, modern analytical chemistry definitions help to identify general substances that function on composition, structure, and reaction analysis for different types of chemical importance. Therefore, the most difficult task for an analytical chemist is to explain what is the nature of analytical chemistry? It is an interdisciplinary domain of science where a large number of research topics contributed to its development. All chromatographic studies in chemistry were invented by biochemists or biological scientists, while methods of the electromagnetic spectrum and mass spectroscopy were discovered by physicists. But if we close look, the different types of research topics published in a different set of science journals by using analytical methods, about 60% of such chemistry materials are published by persons who are not analytical chemists in the true sense.

Definition of Specific and Molar Heat Capacity Heat capacity (Specific) of gases is defined as the amount of heat required to raise the temperature of one...

What is chemistry? Formulas, solution, and definition for school college chemistry learning courses.
Contact us: [email protected]
© 2021 by priyamstudycentre.com