Magnesium is a chemical element, alkaline earth metal of Group 2 (IIA) of the periodic table with symbol Mg and atomic number 12. It is an essential metal that controls hundreds of chemical reactions in our body for good health. 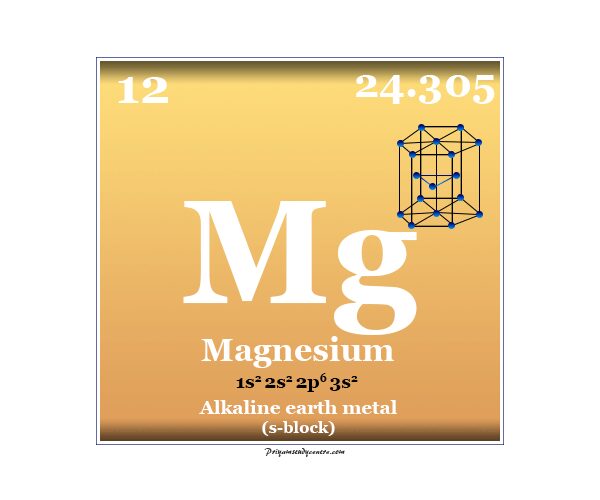 It is used widely in lightweight construction. In the hexagonal closed-packed crystal lattice, magnesium is silvery-white, lustrous, and relatively soft metal. The chemistry of magnesium is marked by the small size and consequently strong electric polarization of Mg+2 ion.

It is much harder than alkali metals due to the use of two electrons for chemical bonding. The ionization energy is also much more than that of beryllium. This is mainly because the size of Mg+2 much higher than that of Be+2.

The third ionization energy of the Mg and other alkaline earth metals is much higher due to the closed-shell electronic configuration like the M+2 ion.

Magnesium in the periodic table 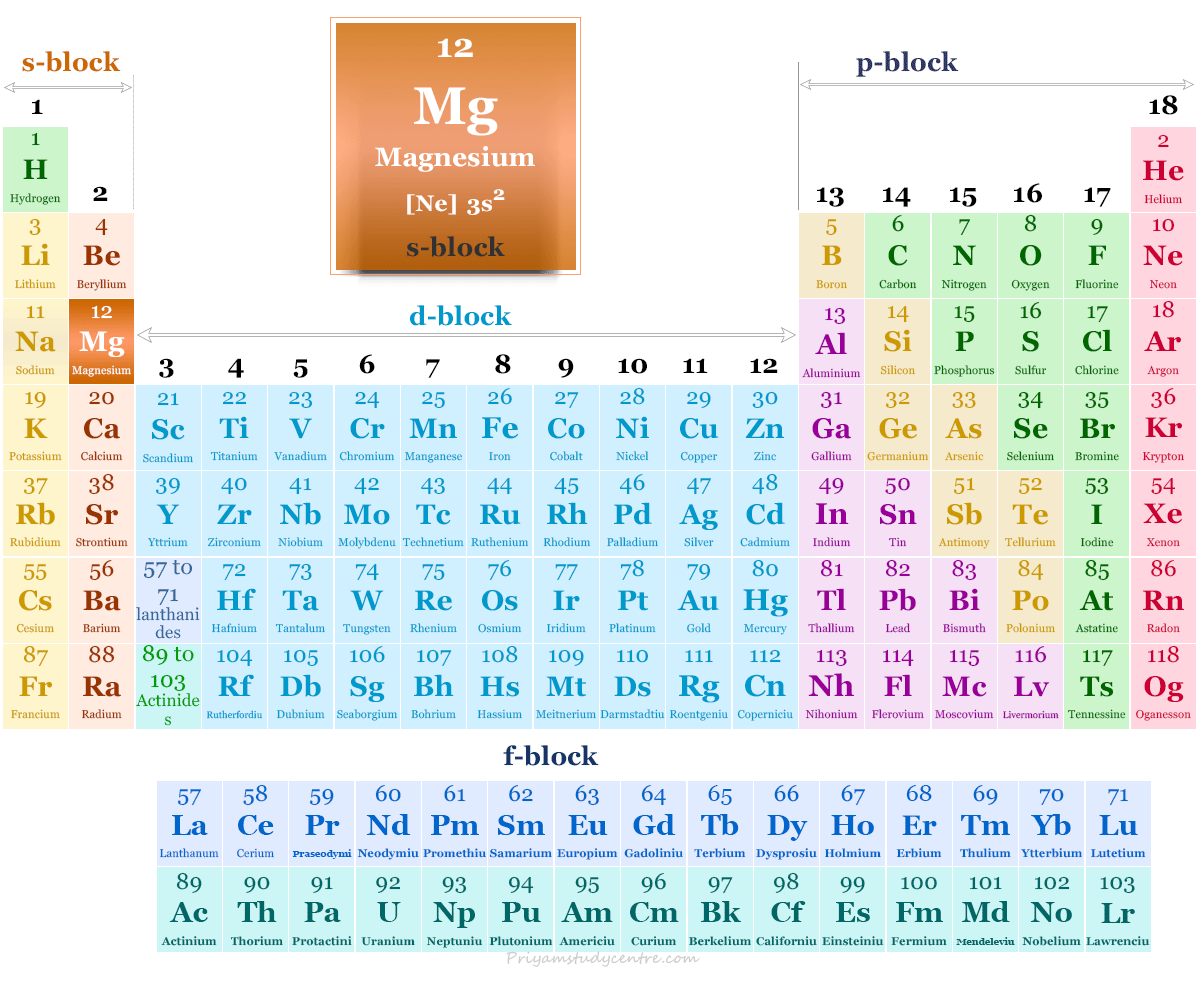 The atomic number of magnesium is 12 and the mass number is 24. Therefore, it contains 12 electrons, 12 protons, and 12 neutrons inside the nucleus. The distribution of these subatomic particles is given below the picture, 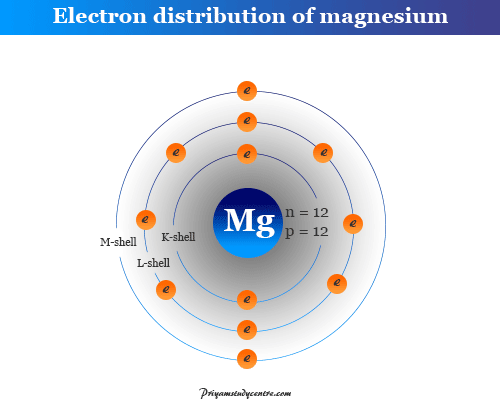 Where is magnesium found?

Magnesium is a highly abundant metal that is found in about 2.1 percent of the earth’s crust. It occurs principally as sedimentary rocks like dolomite (MgCO3 + CaCO3) and other evaporated forms like carnalite (KCl, MgCl2, 6H2O).

A huge quantity of magnesium (0.13 percent) is found in sea water. The majority supply of metal now comes from the sea water. A large amount of metal is found in the mantle of the earth (olivine).

Magnesium is the eleventh most abundant element by mass in the human body which controls the biological reactions of different types of enzymes.

The chlorophyll in the plants contains Mg+2 ions. Its compounds are widely used in medicine, antacids, and stabilize abnormal nerve excitation or blood circulation.

It is produced either by electrolysis or silicothermal reduction.

In the electrolytic method, the fused anhydrous mixture of (MgCl2 + CaCl2 + NaCl) is electrolyzed at 750 °C using iron cathode and graphite anode in an inert atmosphere.

In the silicothermal process or Pidgeon process, magnesium oxide or calcinated dolomite (CaO, MgO) is heated with ferrosilicon at about 1150°C in an alloy steel reactor. A high vacuum is maintained to distill out Mg formed by the production process.

The properties of magnesium differ from the other member of the group in their behavior toward liquid ammonia.

The hydride of metal is obtained by the direct combination of magnesium with hydrogen at 200 to 400 °C.

An oxide like MgO is an ionic compound with a high melting point. The oxide reacts in water to form hydroxide.

The basic properties of alkaline earth metal hydroxide increase from beryllium to barium. Beryllium hydroxide is amphoteric but all the other hydroxides are basic in nature.

It combines with halogens at a suitable temperature to form dihalide. These are also obtained by reacting the halogen hydracid with metal or its oxide.

Magnesium dialkyls and diaryls may be made by the reaction of LiR or LiAr on Grignard reagent in presence of pyridine at 100°C.
Mg + H2 + 2 C2H4 → MgEt2

Grignard reagents (MgRX) are the most widely used organometallic compounds of the metal. It is made by the slow addition of the alkyl or aryl halide to a stirred suspension of magnesium metal in ether or other solvents. It has wide applications in synthetic organic or hydrocarbon chemistry.

What is magnesium used for?

Function of magnesium in the body

Magnesium is an essential element for the human body to control different types of biological functions.

60 percent of the total Mg of the adult human body is distributed in the skeleton while the remaining is present inside the cells. The Mg+2 ion in the cell next most important cation after K+.

The small doubly charged cation has a high charge/size ratio. It is strongly hydrated as [Mg(H2O)6]+2. The hydrated cation binds the ROPO3H group of nucleotides (ATP, ADP) and polynucleotides (DNA, RNA).

The ion may form strong complexes with oxygen atoms of various phosphate groups. Such complexes are the source of energy for the human body when necessary.