Protein is a nitrogenous substance that occurs in the protoplasm of all animal and plant cells. Proteins can be broken down into smaller and smaller fragments until the amino acids are obtained. The composition and function of protein vary with the sources and structure of protein molecules. It contains mainly carbon, hydrogen, oxygen, nitrogen, and sulfur atom in its structure. Other elements such as phosphorus or iron are present in nucleoprotein and hemoglobin. It is classified into two groups, fibrous and globular proteins. 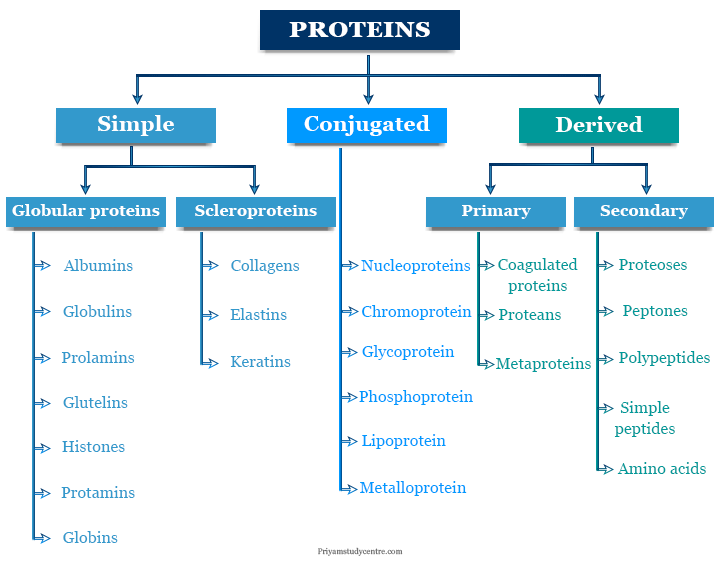 In a common method of classification, proteins are classified into three groups simple, conjugated, and derived protein. Each group of proteins has several classes designated by their general names. Proteins are hydrolyzed by acids, alkalies, or enzymes to give a mixture of amino acids. It suggests that amino acids in proteins are joined in sequences by peptide linkages.

Several arbitrary classifications are used for dividing protein on their shape. Most commonly, proteins are classified into three groups,

Each group is subdivided into a number of classes designated by their general names. Each class contains a number of sub-classes which has different physical and chemical properties.

They give only amino acids or their derivatives on hydrolysis. Simple proteins are classified into several classes such as albumin, globulin, prolamin, glutelin, and scleroprotein.

Albumins are simple proteins that are soluble in water and coagulated by heat. It is precipitated by the solutions of ammonium sulfate. Some common examples of albumins are egg albumin, serum albumin, and lactalbumin.

Globulins are proteins that are insoluble in water but soluble in dilute salts solution and inorganic acids and alkalies. It is coagulated by heat and half saturated by ammonium sulfate solutions. Globulins are usually contained glycine. Some typical examples of globulins are serum globulin, tissue globulin, and vegetable globulin.

Prolamins are a group of plant storage proteins that are insoluble in water or salt solution but soluble in dilute acids or alkalis. It contains large amounts of proline. Prolamins are found mainly in plant seeds such as wheat, barley, rye, corn, sorghum, oats, etc.

Glutelins are a class of propain prolamin proteins insoluble in water and dilute salt solution but soluble in dilute acid or alkalies. They are found in the endosperm of certain seeds. Arginine, proline, and glutamic acid are the main components of glutelins. It is found mainly in wheat (glutenin) or rice (oyrzenin).

Histones are a highly basic class of proteins soluble in water but insoluble in dilute ammonia solution. They are not coagulated by heat and contain large amounts of histidine and arginine. They are hydrolyzed by pepsin and trypsin. Histones are found in eukaryotic cell nuclei. Histones are the proteins of DNA and hemoglobin. They play an important role in gene regulation and DNA replication.

Prolamins are more basic than histones with a simple structure. They are collectively known as sperm-specific nuclear basic proteins. Prolamins are soluble in water, dilute acids and dilute ammonia. They are coagulated by heat and precipitated by ethanol solution. The arginine-rich proteins prolamins are found in various nucleic acids. They are hydrolyzed by various enzymes like trypsin and papain.

Globins are heme-containing globular proteins that bind or transport oxygen to the cells. Myoglobin and hemoglobin are the two important members of globins.

Nucleoproteins: These are the conjugated proteins that contain nucleic acid as a prosthetic group.

Chromoproteins: These are characterized by their color prosthetic group. Chlorophyll and hemoglobin are the most common examples of chromoproteins.

Phosphoproteins: These are conjugated proteins in which the prosthetic group contains a phosphate group or a complex molecule such as 5′-phospho-DNA.

Lipoproteins: The prosthetic group in lipoproteins is lecithin, kephalin, etc.

Metalloproteins: These contain a metal that is an integral part of the structure. Many metals such as iron, manganese, copper, and magnesium formed metalloproteins. For example, hemoglobin and chlorophyll contain iron and magnesium metal.

There are four distinct parts of the protein that have primary, secondary, tertiary, and quaternary structures. 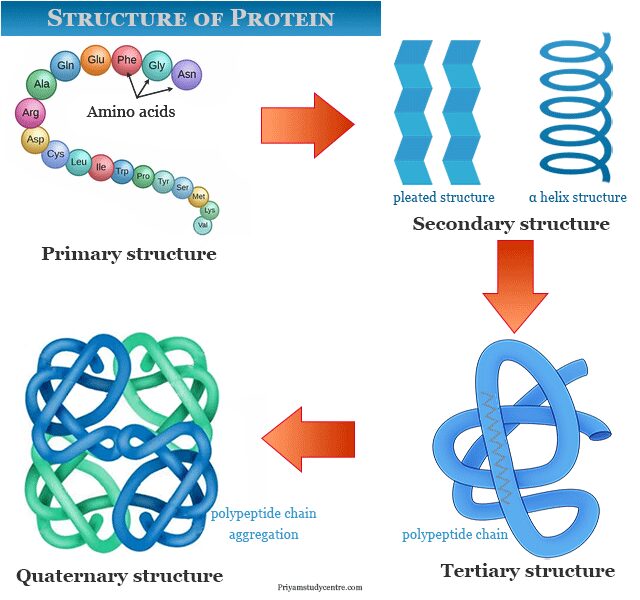 Very small changes in amino acid sequences can alter the overall structure and function of the protein. The amino end of peptides is said to be N-terminal and the carboxyl end is said to be C-terminal.

Two types of plated streets such as parallel and anti-parallel are possible in protein structure. In a parallel sheet, all the chains run in the same direction but antiparallel chins run alternatively in opposite direction.

The tertiary structure of a protein refers to the three-dimensional model obtained from a single polypeptide chain. Hydrogen bonding, ionic, and hydrophobic bonds are involved in the folding of the entire secondary structure. The major molecular shape occurs naturally like fibrous and globular. Fibers protein has a large helical content with a rod-like shape.

Quaternary structure is the three-dimensional structure obtained from two or more polypeptide chains. Both fibrous and globular proteins contain only one polypeptide chain or several chains. The protein which contains several chins is called oligomeric. The individual chin is called protomers or subunits. These subunits may or may not be identical and held together by hydrogen bonding.