What is nicotinamide adenine dinucleotide phosphate? 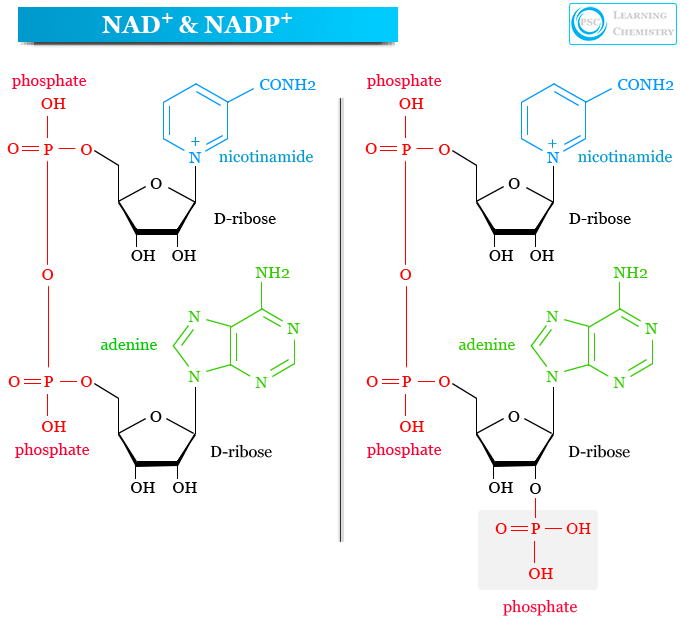 The biological synthesis process of NAD and NADP are the same but an extra step is required for the synthesis of NADP. Usually, the extra phosphate group in nicotinamide adenine dinucleotide is added by the enzyme NAD+ kinase and removed by the enzyme NADP+ phosphatase.

Nicotinamide adenine dinucleotide phosphate control light-dependent reactions in photosynthesis. It picks up two hydrogen atoms from water during photosynthesis to form NADPH2 (a powerful reducing agent). During the dark reactions, NADPH2 assimilates carbon dioxide and water to form glucose molecules. NADPH also participates in the nitrogen fixation process of plants for the reduction of nitrate to ammonia.

NADP+ and NADPH are the typical coenzymes that participate in various anabolic reactions or redox reactions in a biological cell. These coenzymes control various biological reactions in all forms of life. The redox pair, NADP+/NADPH is involved in lipid and cholesterol biosynthesis, fatty acyl chain elongation, and antioxidation processes. NADP+ can be accepting electrons and hydrogen atoms to form NADPH molecules. 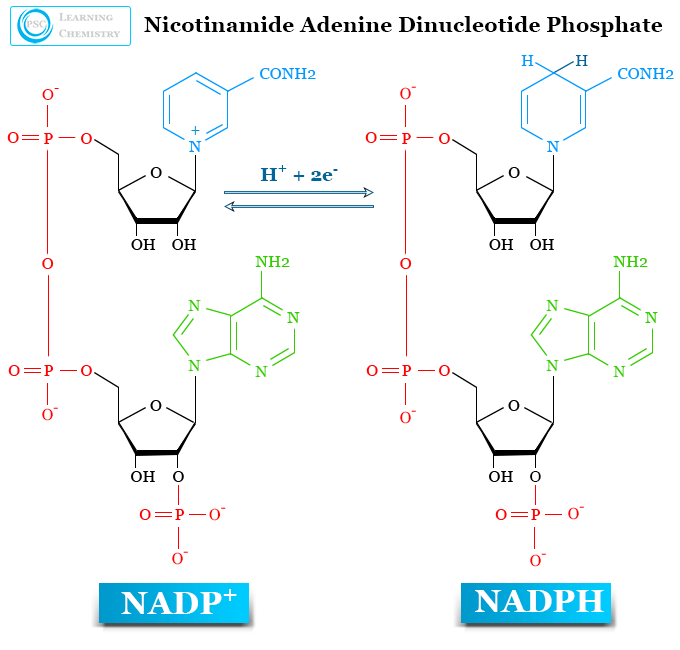 In biological synthesis processes, it is formed before the formation of NADPH. Like NAD+ synthesis, NADP+ is also synthesized by de-novo or the salvage pathway. But it involved an extra step where NAD+ is converted into NADP+ by the influence of the enzyme NAD+ kinase.

It is a universal electron carrier that accepts electrons and hydrogen atoms to form NADPH. It controls various anabolic reduction reactions that convert small molecules to large macromolecules or polymers in the biological cell.

NADPH is a cofactor that donates high-energy electrons and hydrogen to enzyme-catalyzed reactions. Generally, it is produced from NADP+ in various biological processes. In animals and other non-photosynthetic organisms, it synthesizes predominantly in the pentose phosphate pathway by the enzyme glucose-6-phosphate dehydrogenase (G6PDH).

In chloroplasts of the plants, NADP has reduced by the enzyme ferredoxin-NADP+ reductase in the last step of light-dependent reactions of photosynthesis. It provides the reducing power for the biosynthetic reactions in the Calvin cycle of photosynthesis. Several lesser-known enzymes like malic enzyme, isocitrate dehydrogenase, and glutamate dehydrogenase are also involved in NADPH generating processes.

The main functions of NADPH in biological processes are,

The sodium and potassium salt of β-NADP+ supplement is a colorless to faintly yellow powder soluble in water. The high purity β-NADP+ is a cofactor used in various research and analysis of biochemical enzyme-catalyzed reactions. β-nicotinamide adenine dinucleotide phosphate (β-NADP) supplement is used mainly for the determination of glucose-6-phosphate content and glucose-6-phosphate dehydrogenase activity.