What are amino acids?

Amino acids are types of organic compounds that contain amino and carboxyl groups in their side chain and essential for the growth of young animals. Carbon, hydrogen, oxygen, and nitrogen are the key elements found in the amino acid structure. Other chemical elements are also found in the side chain of certain amino acids. 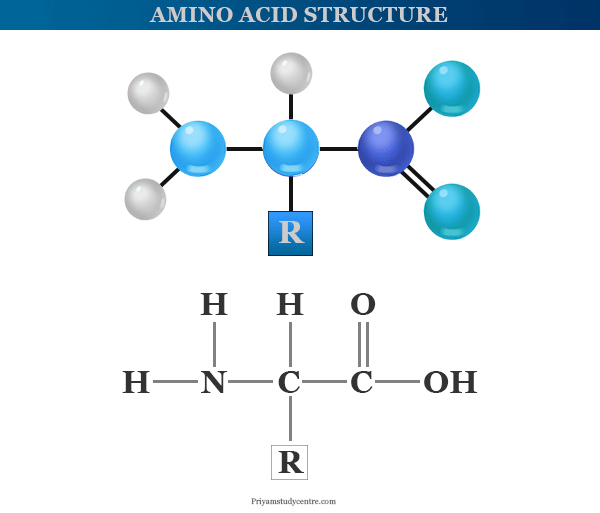 When proteins are hydrolyzed by acids, alkalis, or enzymes, they yield different types of amino acids. All the acids obtained from protein are α-amino acid but proline and hydroxyproline are imino-acids. Nine amino acids are essential for the growth of our body. The deficiency in anyone prevents the growth of young animals and may even cause death.

Amino acid molecules are the basic building blocks of proteins that contain amino (-NH2) and carboxyl (-COOH) groups in their structure. Each amino acid has a definite structure. According to the attachment of the amino and carboxyl groups, these are classified as α, β, and γ amino acids. The names, structure, formula, and examples of some common amino acids are given below the picture, 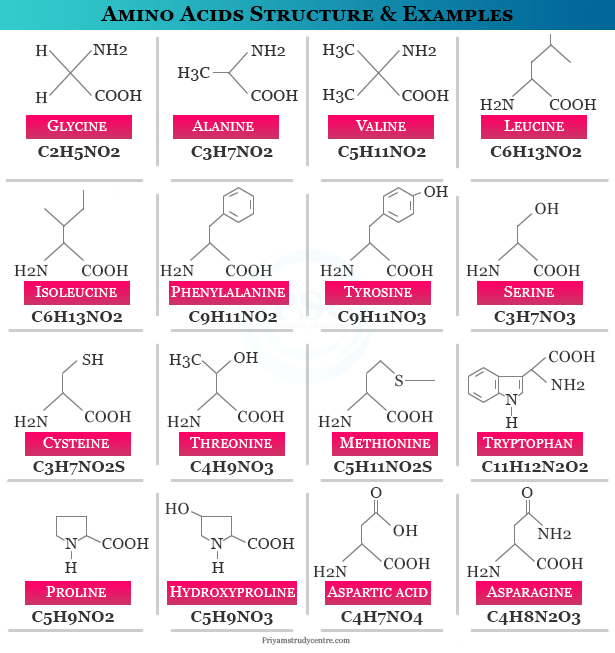 Essential or indispensable amino acids are acids that cannot be synthesized in our body and are essential to eating food to get them. There are nine amino acids like histidine, isoleucine, leucine, lysine, methionine, phenylalanine, threonine, tryptophan, and valine are essential for the growth of our body. A deficiency in anyone prevents the growth of our body and may even cause death. Therefore, it is essential to eat food that contains these acids.

Animal-based foods such as meat, milk, fish, and eggs are the main sources of essential amino acids. They are also obtained from plant-based food like soy, beans, nuts, and grains.

Based on the number of amino groups and carboxyl groups, these are classified as neutral, acidic, and basic amino acids.

A basic amino acid contains two amino groups and one carboxyl group in its structure. The systematic name and chemical formula of some common basic amino acids are given below the table,

In a neutral solution, they exist as dipolar ions. For each amino acid, there is a particular pH scale value at which the concentration of dipolar ion is maximum. In acid solution, the conjugate acid is predominating but in basic solution, the conjugate is predominating. The dipolar ion is electrically neutral because the net charge is zero. In this condition, they do not migrate when placed in an electric field. The pH at which migration does not occur is called the isoelectric point of amino acid. Some common properties of amino acid are given below,

Ninhydrin (indane 1, 2, 3-trione hydrate) reacts with amino acids to form a coloured product. It is used as a sparing reagent in the identification and qualitative estimation. Most of the acids react with ninhydrin to give blue coloured products. However, proline and hydroxyproline give yellow coloured products.

What is formic acid? Formic acid or methanoic acid is a colourless, pungent, corrosive liquid or simplest carboxylic acid with the chemical formula H2CO2 or...