Enzymes are the biological catalyst or proteins which are produced in living organisms and speed up the chemical reactions in living cells. There are various types of enzymes produced in our bodies that have a specific biological function. Usually, enzymes are present in various cells and exhibit their activity when they are extracted from their source. 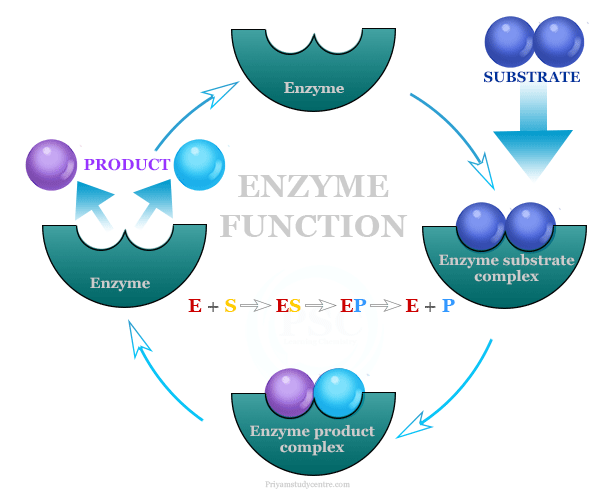 Almost all the metabolic process is controlled by enzyme catalysis reaction. For example, protease breaks down protein into amino acids which is essential for body growth.

Enzymes are dispersed in water by forming colloids having dimensions in the range of 10−7 to 10−4 cm. All enzymes are globular proteins but many have been identified and a large number have been obtained in crystalline form.

Enzymes are proteins that help to speed up the metabolism in our body. Digestion is an imported function of enzymes for the production of energy from foods that we are eaten. For example, the enzymes from our saliva, pancreas, intestines, and stomach can break down food into fats, proteins, and carbohydrates.

Enzymes also control several body functions like breathing, muscle construction, nerve construction, etc. There are thousands of enzymes produced in our body which has a specific function.

The international commission in 1961 recommended a systematic classification and nomenclature of enzymes. A common method for naming enzymes adds the suffix ase to the name of the substrate.

Oxidoreductases are the types of enzymes that catalyze oxidation reduction reactions in living cells. For example, oxidase is an oxidoreductase enzyme that involves the direct oxidation of molecular oxygen.

Similarly, dehydrogenases involve the removal of hydrogen from the substrate. Other oxidoreductases include peroxidases, hydroxylases, oxygenases, and reductases.

Transferases are the class of enzymes that catalyze the transfer of various functional groups from a donner molecule to a receptor molecule.

Hydrolases are the class of enzymes or biochemical catalysts which catalyze hydrolytic reactions in the biochemical process. They used water for breaking a covalent bond. Proteases, esterases, and phosphatases are common examples of hydrolases.

Isomerases are the class of enzymes that catalyzes the various types of isomerization. Isomerization is a process in which one isomer is formed from another isomer. Racemases and epimerases are examples of isomerases.

The nature of the interaction between enzymes and substrate can be various types like hydrogen bonding, electrostatic force, hydrophobic bonds, and covalent bonds. 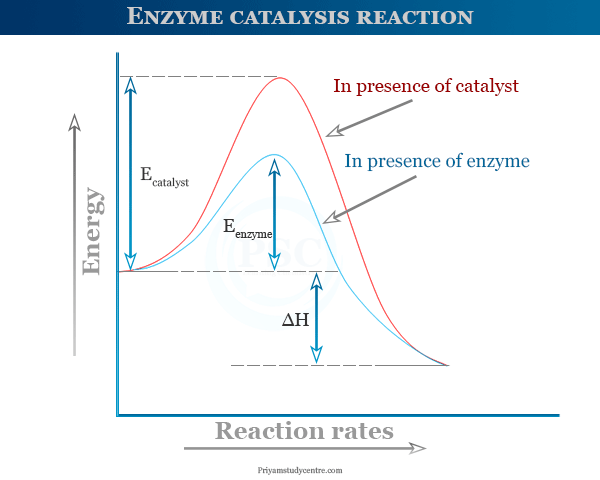 Like chemical catalysts, enzymes also lower the activation energy of reactions that they catalyze.

The efficiency of enzyme catalysis is much greater than the chemical catalyst because they lower activation energy much greater extent. For example, the decomposition of hydrogen peroxide by an enzyme is much more efficient than catalyst platinum.

Enzyme activity can be reduced or inhibited by the presence of various compounds. These are known as enzyme inhibitors. There are two major types of inhabitation competitive and irreversible.

Many enzymes require the presence of non-protein compounds in order to perform their catalytic action. These compounds are collectively known as cofactors of activators of enzymes. They are classified into two groups,

Coenzymes are organic compounds that may be separated from enzymes by dialysis.

In some cases, inorganic ions or metal ions are tightly bound to the enzyme. They are called metalloenzymes. In other cases, the enzymes are metal-activated. Metal activators are uni or bivalent cations such as Na+, K+, Mg+2, Zn+2, and Ca+2.

Various other examples of enzyme catalysis reactions where starch can be converted into alcohol are given below the picture,

Many enzymes exhibit kinetic specificities such as esterase and pepsin. Although esterase can hydrolyze all the esters but these hydrolyzes can carry out at different rates. Many enzymes are stereospecific such as maltase hydrolyses α-glycosides but can not function on β-glycosides.

What is methanol? Methanol or methyl alcohol also called carbinol is a colourless, inflammable, poisonous alcohol with the chemical formula CH3OH. It is missable with...