Hemoglobin or Hb is the iron-containing metalloprotein present on the red blood cells (RBCs) that is responsible for transporting oxygen in our body through blood. The structure of the heme group in hemoglobin is given below the picture, 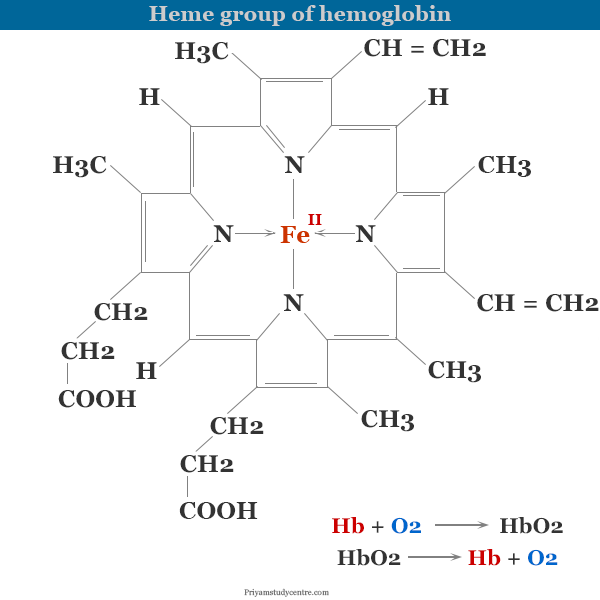 It is an octahedral complex of iron (II). The center of the octahedron is occupied by the Fe (II) atom and the four corners of the square base contain four nitrogen atoms of the heme group.

Low and high levels of hemoglobin cause different types of health diseases. If there is a deficiency or low level of hemoglobin due to the destruction of RBCs (hemolysis) or loss of RBCs through bleeding or the bone marrow is not able to produce new RBCs fast enough then the overall hemoglobin will drop down. It causes the diseases like anemia and leukemia.

The entire heme structure is encapsulated in a water-repelling pocket of protein chains. In adults, hemoglobin has four proteins chain each of with has a heme pocket. The packed form roughly contained a tetrahedral cluster like α2β2. The alpha chains have 141 amino acids residues and the beta chains have 146 amino acid residues.

For infants, the hemoglobin molecule is made up of 2 α chains and 2 γ chains. The gamma chains of hemoglobin are gradually replaced by β chains as the infant becomes an adult.

An adult human contains about 5 liters of blood. Each milliliter of blood contains 5000 million blood cells. Each cell contains 0.25 million Hb molecules. Red blood cells (RBCs) have a relatively short life span of about 100 to 120 days. Therefore, about one percent of Hb molecules in blood are replaced daily.

Hemoglobin normal ranges vary from male to female and newborn to infant. The normal results for hemoglobin ranges are given below the chart,

The six-position of hemoglobin structure is empty. Therefore, when a human or an animal inhales oxygen from our environment, the gas combines with the Hb of the lungs to form oxyhemoglobin (HbO2).

Oxyhemoglobin formed in the lungs dissociates into Hb and O2 at the cells of the muscles. Hence oxygen becomes available to the body’s muscles or cells.

In other words, we can say that hemoglobin functions as an oxygen carrier from the lungs to tissues through the blood. To function as an ideal carrier of oxygen, oxyhemoglobin must be able to release the dioxygen at the cell to which oxygen can be delivered. 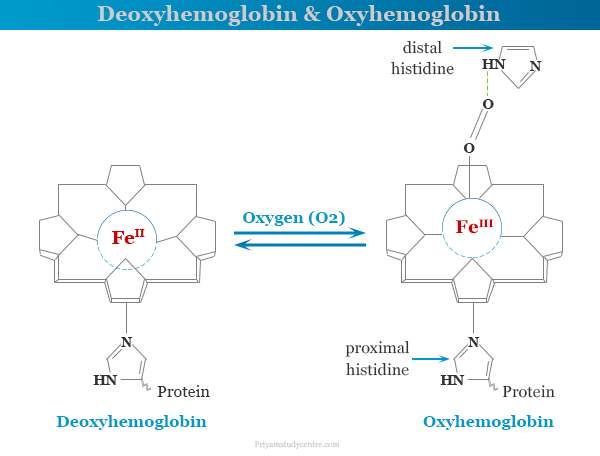 Upon binding of dioxygen or oxyhemoglobin, the iron atom moves about 13 pm of the plane and pulls histidine towards it. The dioxygen in oxyhemoglobin is bound in a bent fashion. It further makes a hydrogen bond to an N-H chemical bond in an imidazole residue on the side away to form a coordinated imidazole base.

The O-O The stretching band of coordinated O2 molecules lies at 1105 cm−1 which is close to the superoxide ion. Therefore, iron in the oxyhemoglobin complex may be taken as low spin Fe (III).

The binding of dioxygen by deoxyhemoglobin leads to the release of protons. Therefore, dioxygen release is favored by a decrease in pH scale level. In active muscle, oxygen is converted to carbon dioxide. It releases protons under the action of enzyme carbonic anhydrase which facilitated to release of dioxygen from the oxyhemoglobin complex.

When the oxygen supply to our body cells or brains is completely lost, anoxia has happened. It causes suffocation and may even lead to death.

The deficiency of hemoglobin causes the diseases like anemia and leukemia. It is identified by symptoms,

If our body does not produce new red blood cells, the hemoglobin level may be dropped down from normal values. Iron deficiency anemia can be easily treated by eating iron-containing foods or medicine.

Lower hemoglobin levels may be developed due to,