Carbon is a nonmetallic chemical element of group-14 (IVA) in the periodic table with atomic number 6 and symbol C. It occurs in nature as carbon black, activated carbon, graphite, diamond, carbon dioxide, carbon monoxide, carbonates, etc. Carbon is the key chemical element for all living organisms present in our environment. It forms a large number of organic compounds with hydrogen. 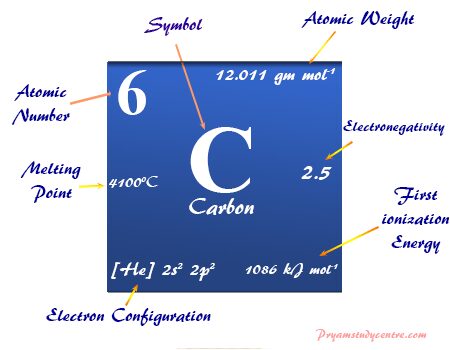 Interestingly, sp3 hybridization is not the only way to attain noble gas configuration. Carbon can attain octet through multiple covalent bonding with its own atom by sp2 or sp hybridization. It also formed multiple bonds with oxygen, nitrogen, or sulfur.

The chemistry of carbon is unique due to its catenation properties. The strength of C-C single bonds and C-C multiple bonds helps carbon to form long-chain organic compounds. The property of forming compounds with chains of identical atoms is called catenation.

What is carbon cycle?

It is the biogeochemical cycle where carbon and its compounds are exchanged among the biosphere, pedosphere, geosphere, hydrosphere, and atmosphere of our earth’s environment. Major steps of the carbon cycle may include,

The chemistry of group-14 elements followed by their electronic configuration but differences in properties between carbon and silicon are rather wide.

Carbon is placed in group 14 of the periodic table along with silicon, germanium, tin, and lead. All these elements have an outermost quantum shell composition of s2p2. 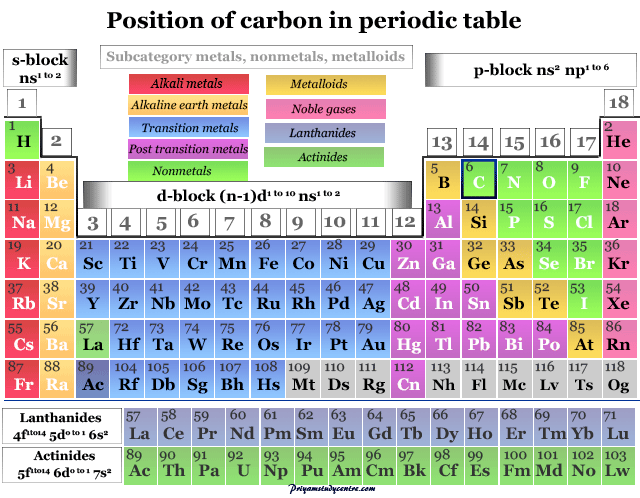 It is present in the earth’s crust to the extent of about 0.08 percent and crude oil, coal, and natural gas. Hydrocarbon is the most common combined form of carbon. Flakes of graphite and crystalline diamond occur in metamorphosed sedimentary rocks like quartz.

Diamond occurs in Kimberlite (a dark color basic rock of Kimberlin found in South Africa) with ancient volcanic pipes. India and Borneo are the oldest diamond-producing countries in the world. The allotrope diamond was found in Brazil in 1729 and South African deposits were discovered in the latter part of the nineteenth century.

The principal isotope of carbon is C-12. The isotope, C-13 occurs in nature to the extent of 1.11 percent. It can be used in Fourier transform nuclear magnetic resonance (NMR-spectrum) data analysis.

The atmospheric CO2 contains about 1.2 × 10−10 percent of radioactive C-14 isotope with a half-life of 5570 years. It is produced by the neutron-proton reaction on nitrogen by thermal neutrons resulting from cosmic radiation. The ratio of C-14 and C-12 is used widely in radiocarbon dating or determination of age of plants or animals.

Atomic carbon is a very short-lived species and stabilized by various multi-atomic structures which known as allotropes. It has several crystalline allotropic firms. Diamond and graphite are common allotropic forms of carbon. Other poorly understood allotropes are,

Carbon is the key element in all living systems. It forms more organic and inorganic compounds than any other chemical element except hydrogen.

When we have taken four ionization energies together, the value is very high. No compounds know with + 4 cations. Instead of forming ionic compounds, in most cases, the compound is formed by four covalent bonding with sp3 hybridization.

It not only forms the single covalent bonding to attain the noble gas electronic configuration. It also formed multiple bonds with sp2 and sp-hybridization in unsaturated hydrocarbon compounds like ethylene and acetylene.

The common oxidation state of carbon in various inorganic compounds is +4 but the +2 state is also found in carbon monoxide and transition metal carbonyl complexes.

Among all the natural forms, coke is used in large quantities for energy generation in our daily life. Coke is obtained by cooking or high-temperature carbonization of coal in the absence of air.

Natural graphite was obtained in a mixture of mica, quartz, and silicates. The mixture was washed by flotation and heated with hydrochloric acid and hydrofluoric acid in a vacuum. The residual silicon compounds precipitated as SiF4 molecules.

Nearly half of the industrial requirement of graphite is made by the synthetic process. It is made by heating silica with coke in an electric furnace at 2500 °C for about 24 hours.
SiO2 + 3 C → SiC + 2 CO + C (graphite) + Si

Natural diamond is mined in large quantities which are about 18 tonnes per year. Of these 30% are used as gems while rest goes to various industries.

It is prepared by incomplete thermodynamics combustion of hydrocarbons.

Activated charcoal is prepared by controlling pyrolysis of organic compounds like sawdust or coconut shell. Activation of the surface is accompanied by adding materials that oxidize or dehydrate the organic substrate on the surface. The edge of the hexagonal graphite sheets is probably covered with oxygenated groups which are responsible for surface activity.

Graphite fibers are obtained when synthetic fibers or asphaltic fibers are subjected to pyrolysis. The strong fibers have the same structural formula as graphite but they contain layers of ribbons in place of sheets. It is parallel to the axis of fibers.

The first two elements in group 14 occupy a special position in our life. They use widely in our daily life in various production processes.

Uses of graphite and diamond

Graphites and diamonds are two major allotropic forms of carbon.