Calcium is the chemical element or alkaline-earth metal of Group-2 (IIA) of the periodic table with the symbol Ca and atomic number 20. It is the essential element in the human body for building bones, clotting blood, contracting muscles, and beating our hearts. 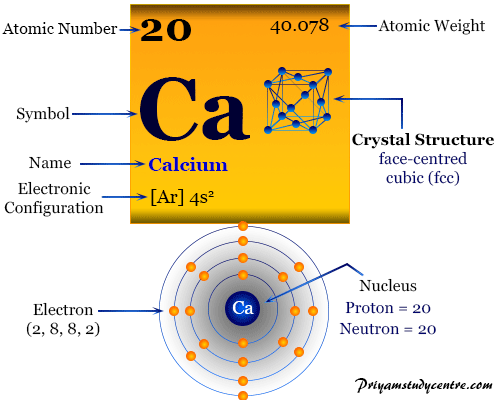 About 90 percent of the calcium in the human body is used to make our bones and teeth. It is a silvery-white, lustrous, and relatively hard metal than alkali metals.

The electronic configuration of calcium suggests that the metal has two s-electron available for chemical bonding. Therefore, the common oxidation number or state of Ca is +2.

It is formed a face-centered cubic crystal lattice with a higher melting point than alkali metals.

It possesses a 4s2 valence shell electronic configuration over the previous noble gas argon. The s2 configuration leads to inclusion in Group-2 or IIA of the periodic table.

Some important properties of the metal are given below the table,

Calcium in the periodic table

Due to two electrons in the valence s-orbital, calcium was placed in the s-block of the periodic table with other group members beryllium, magnesium, strontium, barium, and radium. 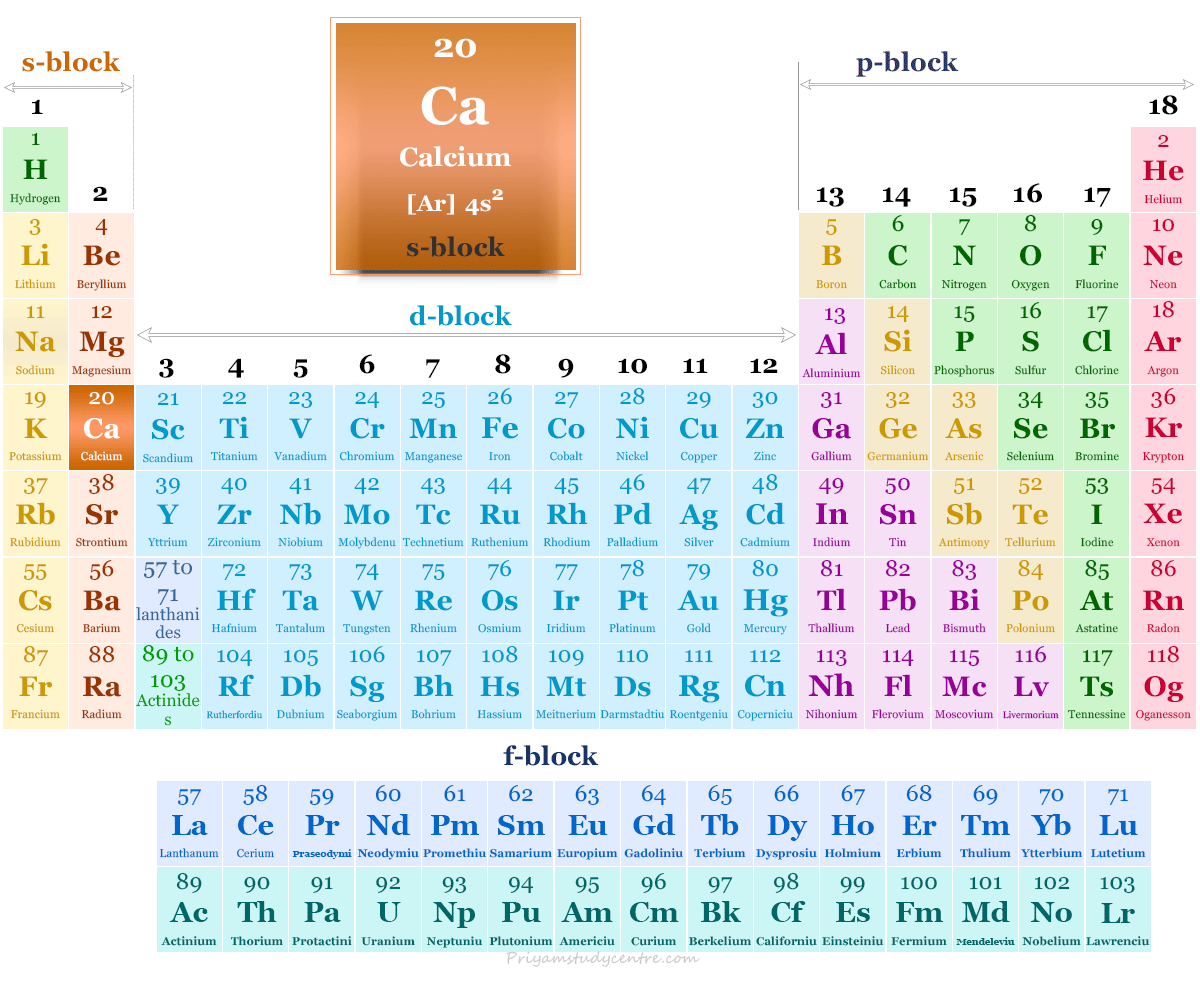 Where is calcium found?

It is the fifth most abundant element (3.63 percent) in the earth’s crust. It is concentrated in minerals that are probably separated during the main stage of the crystallization of magma.

Weathering and leaching lead to the formation of minerals calcium carbonate (CaCO3) or limestone in earth soil. The very low solubility of CaCO3 is the most probable reason for the absence of a significant amount of Ca+2 ion in sea-water.

Every day we lose calcium from our body through our skin, nails, hair, sweat, urine, and feces but our body cannot produce it. Therefore, we need to eat Ca-reached foods or vegetables that sustain the deficiency of Ca in our bodies.

It is the first lightest element that contains six naturally occurring isotopes.

It is produced on a commercial scale by electrolysis of fused CaCl2. Some fluorspar (CaF2) was added due to the lower temperatures for fusion.

The electrolysis is carried out in a graphite pot serving as an electrode or anode. A water-cooled iron cathode hangs into the fused electrolyte.

The produced metal is deposited on the cathode in the form of a rod when the electrolysis proceeds. A layer of fused electrolyte protects the metal from oxidation.

Grup-2 elements of the periodic table are characterized by two valence electrons in an s-shell of the atoms. These two electrons are always involved together to show the uniform bivalency of the metal.

The properties of elements like Ca, St, Ba, Ra, and their compounds are systematically and gradually changed with the increasing atomic number.

Electropositive or metallic character and ionic radius increase from calcium to radium. Thermal stabilities of carbonates, nitrate, and sulfates are also increased from Ca to Ra.

Calcium hydride is formed by ionic bonding due to the high electropositive character and large size of the metal. CaH2 is a high meting crystalline solid, that conducts electricity in a fused state and liberates hydrogen on electrolysis.

The hydride is obtained by the direct combination of hydrogen with the metal. The reaction of CaH2 with water provides a ready source of hydrogen.

All the oxides of Grup-2 elements are ionic with a high melting point but beryllium oxide is formed by covalent bonding.

The tendency to form peroxide and superoxide increases with the increasing atomic number of the Group-2 elements. Calcium superoxide is formed by the reaction of metal peroxide with 30 percent hydrogen peroxide.

The oxides react with water to form hydroxides. The basic properties of Group-2 hydroxides increase from beryllium to barium.

All the crystalline halides of Ca are ionic in nature with a high melting point. CaF2 is a high meting (melting point 1418 °C) water-insoluble solid while chloride is a lower melting point and water-soluble.

The bromide and iodide have still lower meting and are higher soluble in water and alcohol.

What is calcium used for?

Function in the human body

About 90 percent of the metal in the human body is used to make our bones and teeth.

It does not only play a major structural role but also plays crucial regulatory functions like muscle construction, nerve transmission, and blood coagulation. The deficiency of calcium in the human body causes hypocalcemia, rickets, and osteoporosis.