Conductance or electrical conductance is the reciprocal of resistance (G = 1/R) describes the property of an electrolyte solution that helps to conduct electricity in the solution. In chemistry or physics, the unit of conductance is equal to ohm−1 or mho and siemens in the SI system. 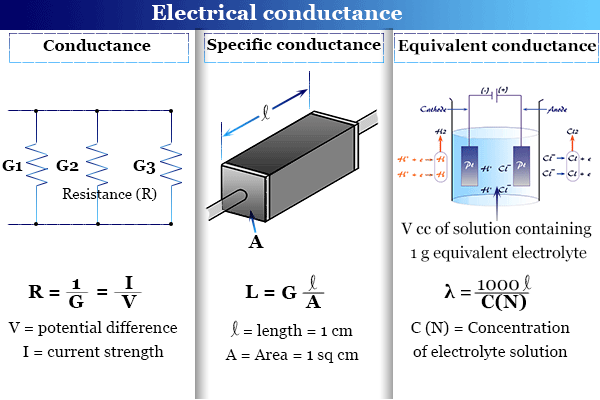 What is electrical resistance?

From Ohm’s law, R = V/I or conductance, G = 1/R = I/V, where V = potential difference between the two electrodes dipped into the electrolytic solution, I = current strength and R = electrical resistance that obstructs the flow of current. The electrical resistance of a given solution depends on the nature of the electrolyte solution, the distance of separation of two electrodes, and the area of electrodes.

Specific conductance (L) depends on the number of ions present per cc of the solution, the charge of the ions, and the speed of the ions. It also depends on the temperature of the electrolytic solution and increases by a 2 percent per degree rise in temperature. Therefore, with the dilution of the strong electrolyte solution, the number of ions per cc decreases while the speed of ions increases. But the first factor predominates over the second and L decreases with the dilution of the solution.

Molar conductivity (μ) is defined as the conductivity of solution containing 1 mole electrolyte and the solution placed between two parallel electrodes 1 cm apart. The unit of μ is equal to ohm−1 cm2 mole−1 or siemens m2 mole−1.

Kohlrausch equation for strong electrolyte, λc = λ0 – k√C, where k = constant that depends on the temperature and dielectric constant (D) of the medium. For electrolysis of weak electrolyte solution, the Kohlrausch formula or plot does not use for the determination of λ0. The law states that at infinite dilution, each ion moves independent of the influence of its co-ion and contributes a definite share to the λ0 of the electrolyte.

What is Vitamin E? Vitamin E is a fat-soluble vitamin and a powerful antioxidant that is beneficial for immune health and cellular signaling in your...