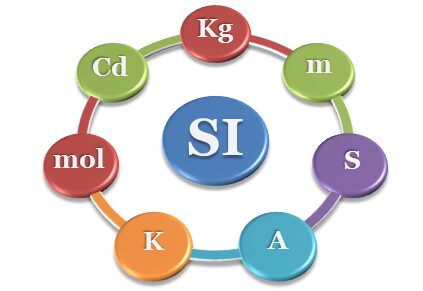 We use units and dimensions of mass, length, and time for measurement and conversion of force, density, energy, work, heat capacity, pressure, surface tension, etc. These physical quantities can be derived from base units or dimensions data.

The SI unit of luminous intensity or candela is not needed in physics or chemistry learning but it is included only for the shake of completeness.

International unit systems or simply SI systems of units and dimensions are used for the measurement and study of most types of physical quantities. For the measurement of wavelengths or wavenumber in the electromagnetic spectrum, we used commonly the CGS system.

Length, mass, time, electric power, thermodynamics temperature, amount of substance, and luminous intensity are seven base physical quantities according to the International Union of Pure and Applied Chemistry (IUPAC).

Fundamental quantities and their units and symbols

Definition of units of measurement

How long is a meter?

A meter is the SI unit of length. A meter is the length of the path traveled by light in a vacuum during a time interval of 1/299792458 seconds.

The kilogram is the SI unit of mass. It is the weight of the platinum-iridium polished cylinder which is kept at the International Bureau of Weights and Measures in a suburb of Paris, France. Platinum-iridium alloy is chosen due to its durability and resistance to corrosion.

The second is the duration of 9192631770 periods of the radiation corresponding to the transition between two hyperfine levels of the f-block element cesium-133 atom in the ground state.

Ampere is that constant current folwing if we maintained two straight parallel conductors of infinite length which are placed one meter apart in a vacuum with negligible cross-section. The force produced between these two conductors is equal to 2 × 10−7 newton per meter.

What is kelvin temperature?

Kelvin is the SI unit of temperature. It is the fraction of 1/273.16 of the thermodynamic temperature of the triple point of the water.

What is mole in science?

The candela is the unit of luminous intensity. Candela means the direction of a source that emits monochromatic radiation of frequency 540 × 1012 hertz. The radiant intensity in that direction has 1/683 watt per steradian.

The below measurement table or chart is used to define the multiple and submultiple prefixes for unit conversion with the roman symbol. 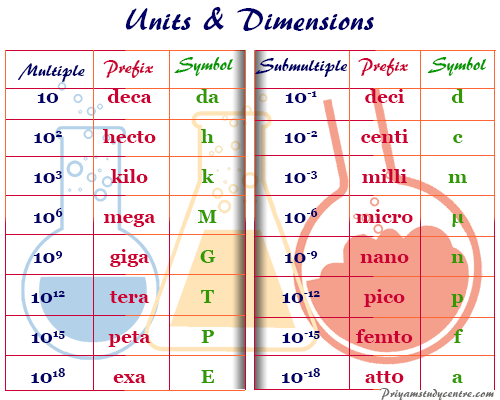 Relation between newton and dyne

What is the unit of work and energy?

From the definition of work,
the unit of work = unit of force × unit of displacement

What is the unit of power?

What is ideal gas law? Ideal gas law or perfect gas law represents the mixed relationship between pressure, volume, and temperature of gases for learning...