Potassium is a chemical element or silvery-white alkali metal of Group-1 or IA of the periodic table with the symbol K and atomic number 19. It was first isolated by Humphrey Davy in 1807 by the electrolysis of molten potassium hydroxide (KOH) with a voltaic battery. It is extensively involved in different types of biological processes in our life. 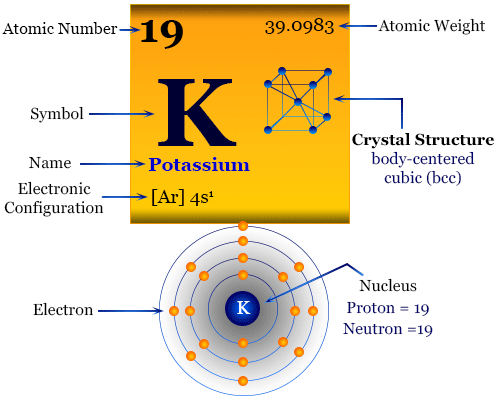 Many compounds of potassium have been used since the early days of human civilization. The large difference between the first and second ionization energy suggests the preferred oxidation number or state of the potassium will be +1.

The physical and chemical properties of potassium can be readily understood in terms of its outer electronic configuration. It has only one electron in the s-orbital over a noble gas core. Due to the very low first ionization energy, it loses one electron to form a K+ cation.

It gives a characteristic violet flame due to easy excitation of the outermost s-electron. This fact leads to the development of analytical chemistry for the estimation of metals by flame photometer. Name, symbol, discovery, and some important properties of the elements are given below the table.

Potassium on the periodic table

The valence shell electronic configuration of potassium [Ar] 4s1. Therefore, it is placed on the s-block of the periodic table with group members of hydrogen, lithium, sodium, rubidium, and francium. 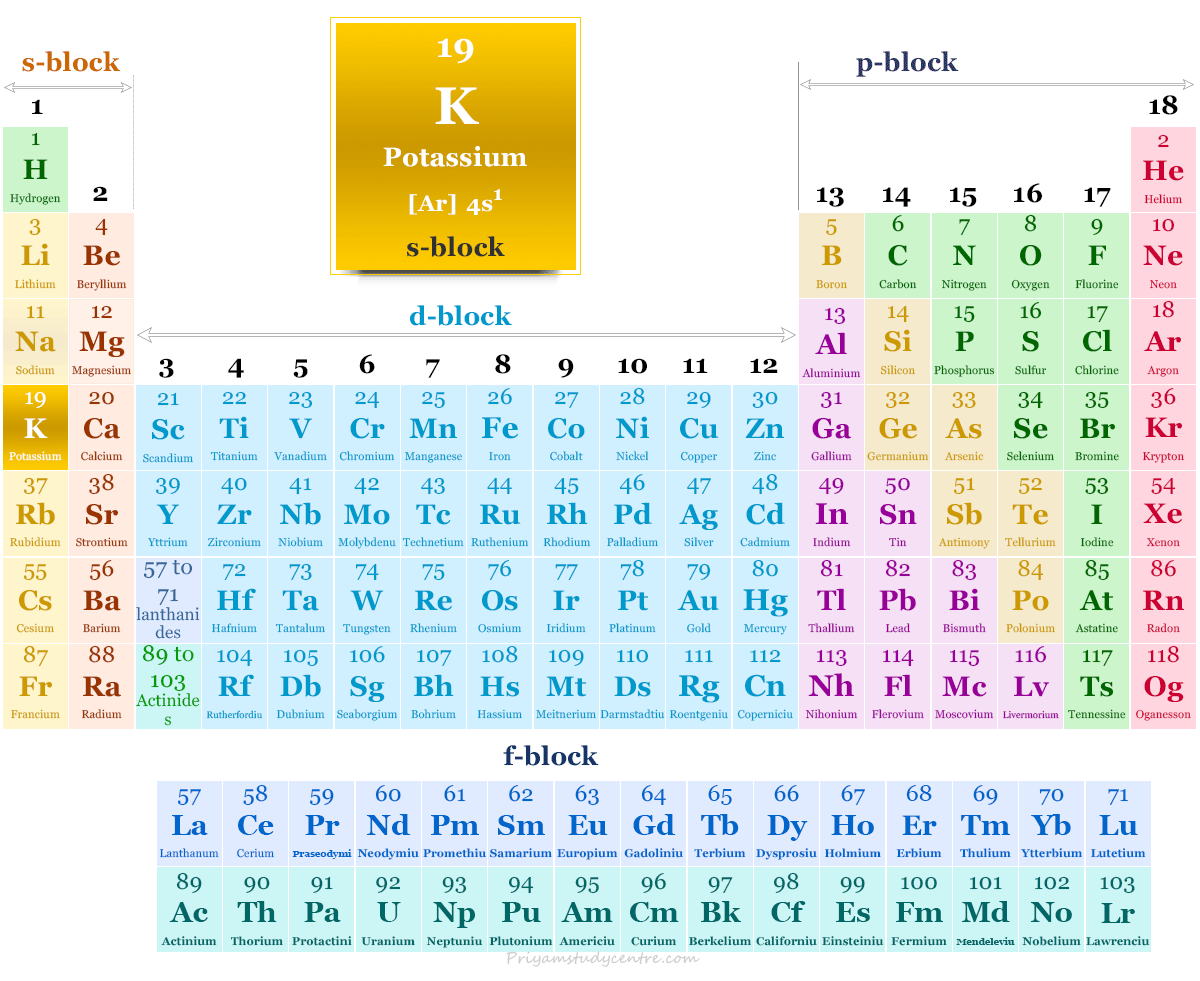 Where is potassium found?

All the alkali metals like Li, Na, K, Rb, and Cs are widely distributed in the earth’s crust of our nature. With the increasing atomic number, the elements become rare. Sylvite (KCl), sylvinite (KCl, NaCl), and Carnallite (KCl, MgCl2, 6H2O) are the most common ores of potassium metal.

Like sodium, K salts are also leached out from the silicon minerals by the action of the weather. The soluble minerals of the metal are called potash. A massive deposit of potash is found in many places of the world like Germany, the United Kingdom, and Canada.

There are 25 known isotopes of potassium but only three like 39K, 40K, and 41K are found in nature. The radioactive isotopes of K have been used as tracers in studies of weathering and medicine.

Commercial production of potassium by electrolysis of molten KCl is not favored because it is quite soluble in the molten electrolyte and does not float on the top. Commercially, it was prepared by reduction of molten KCl by sodium metal at 850 °C.

The reduction process is rather unusual since K is a better reducing agent than Na but at 850 °C, they are in chemical equilibrium. But higher volatility of K in the temperature range 850 °C to 880 °C, sifts the equilibrium towards the right. Therefore fractional distillation was carried out to obtain the metal.

The large difference between the first and second ionization energy of elements suggests the preferred oxidation state of the alkali metals will be +1.

The first ionization energy of potassium is more than the compensated lattice energy for most ionic compounds. Therefore, the major chemistry of potassium is dominated in the form of K+ ions.

All the alkali metal hydrides are ionic in nature containing H− ion. Potassium hydride is formed by the direct combination of hydrogen with metal at 350 to 600 °C. The cubic crystal lattice, KH is a colorless solid with a reasonably high melting point. On electrolysis of hydride, the metal is migrated to the positive electrode or cathode, and hydrogen is migrated to the negative electrode or anode.

Potassium reacts readily with oxygen to form a number of binary compounds like monoxide (K2O), peroxide (K2O2), and superoxide (KO2). The stability of the superoxides increases with the increasing atomic size of the cations. The peroxide is prepared by oxidation of metal in liquid ammonia by oxygen. It is used to restore oxygen in submarines and space capsules for driver breathing apparatus.

Potassium hydroxide (KOH) is a very strong base with a high pH scale. It is a white crystalline solid soluble in water and alcohol. The melting point of alkali hydroxides decreases with the increasing atomic number of alkali metals. Measurement of proton affinities of alkali hydroxides suggests that the base strength increases from LiOH to CsOH.

Potassium halides are colorless, crystalline solids with high melting, boiling point, and high conductivity in the fused state. They all may be prepared by reacting KOH or K2CO3 with appropriate hydrogen halide. For a given cation the lattice energy decreases from lithium to cesium and for a given alkali metal the lattice energies decrease from fluorine to iodine. All the alkali metal halides crystalize as a face-centered cubic crystal lattice.

What is Potassium used for?

For most of the soil, K+ ion is an essential component of plant nutrition. Potassium chloride (KCl) is an important compound that is used in different types of fertilizers to grow the production of crops. Agricultural fertilizers consume 90 percent of the global production of metal in the form of KCl. It forms Na-K alloy which is used in the heat exchanger in breeder reactors.

Many compounds like KCl, KOH, K2CO3, KNO3, KClO3, KBr, and KMnO4 are used in different types of chemical industries.

It is direct burning in the air or oxygen to form KO2, which is used in oxygen supplements for submarines and space capsules.

Potassium is used mainly to activate many enzymes, the transmission of nerve signals, and participation in the oxidation of glucose to produce adenosine triphosphate (ATP).