Electrolysis is a process where chemical changes occur at the electrodes (cathode or anode) due to the passage of electricity passes through the electrolytic solution. In chemistry, the process of electrolysis is carried out by oxidation reduction or redox reaction by which the substance losses or gains electrons. Electrolysis technology is a commercially important process for the extraction or purification of metals (copper, nickel, silver, gold) from their naturally occurring ores or minerals by using electrolytic cell reactions. 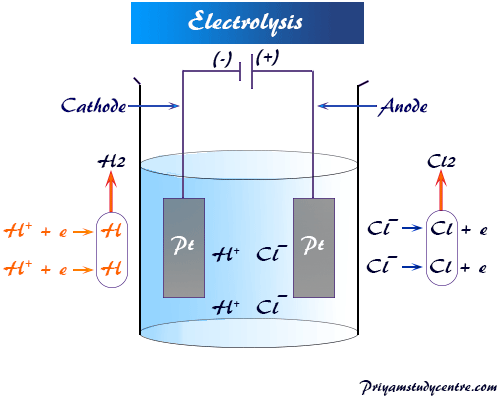 The hydrogen ion (H+) in solution moves toward cathode by Coulombic force of attraction and receives one electron to form the hydrogen atom. In a similar way, chlorine ion from the solution moves towards the anode, departs one electron to form a neutral chlorine atom. Therefore, one-electron transfers from the cathode to the anode with the help of hydrochloric acid solutions or medium, and due to the conductance of electric current or electrolysis, the ions are decomposed at the electrode. Two hydrogen atoms form hydrogen gas and two chlorine atoms form chlorine molecule, escape from the electrolytic solution.

Faraday’s second law of electrolysis states that the weight of different substances decomposed at the different electrodes by given electricity is proportional to their equivalent weight. The mathematical formula of the second law of electrolysis, w1/w2 = E1/E2, where w1 and w2 = weight of a decomposed substance and E1 and E2 = equivalent weights.

What is one faraday of electricity?

One faraday defines the amount of electricity required to decompose one gram equivalent electrolytic substance in chemistry or chemical science, and the numerical value of 1F = 96496 coulombs ≈ 96500 coulombs.

The electrochemical equivalent of silver (atomic mass = 108), ZAg = 108/96500 = 0.001118 gm/coulomb. This law was used to construct the instrument Coulometer to determine the amount of electricity passing through the circuit by determining the quantity of substance decomposes at an electrode in electrolysis solution.