Energy in physics or chemistry is defined as a property that can be transformed into or produced from work. Kinetic and potential energy are common forms. Mechanical, internal, chemical, heat, electromagnetic, and surface tension are the main types that can be obtained from various natural facts. 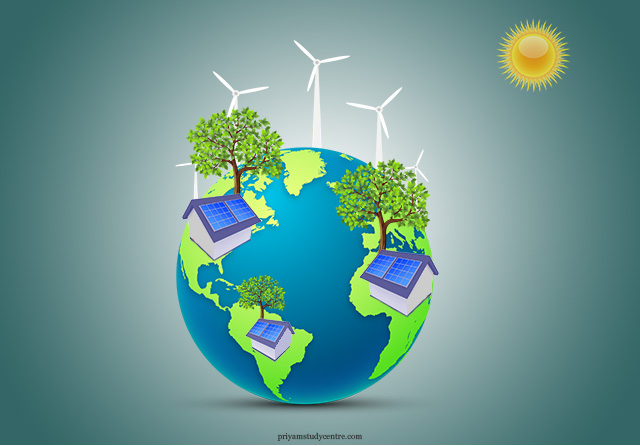 It is measured by SI unit joule and CGS unit erg. The other most common units are calorie (cal), electronvolt (eV), kilowatt-hour (kWh), etc. The conservation of energy states that it can neither be created nor be destroyed but it may transfer one form to another.

It is obtained from different types of non-renewable or renewable sources that can be converted to other forms for doing useful work. In biology, living organisms get energy from food and oxygen to carry out biological processes.

Primary sources are two types such as non-renewable and renewable energy sources.

Oil, natural gas, coal, and nuclear power are the four major types of non-renewable natural resources that we used widely in our daily life. From these four, oil, natural gas, and coal are collectively named fossil fuels.

These resources are obtained due to the decomposition of dead plants and animals over millions of years. These are mainly hydrocarbon compounds.

The common renewable sources may include,

These types of resources we used mainly to save fossil fuels, less environmental pollution, and huge demand for electricity over the world. These primary sources are converted to electricity, a secondary source, and transmitted to homes and factories.

What is heat energy?

Heat or specific heat is another form that can produce work and transfer from one body to another. But heat is different from other sources such as chemical, mechanical or electrical because all the other forms are completely converted into work but heat cannot be wholly converted into work.

More precise examples of conversion of energy into work or heat are the burning of coal or natural gas for doing some useful work. The mechanical work spent by rubbing two crystalline solid blocks of ice generates a quantity of heat. Therefore, there has an intimate relation between heat and work. One can yield the other quantity. 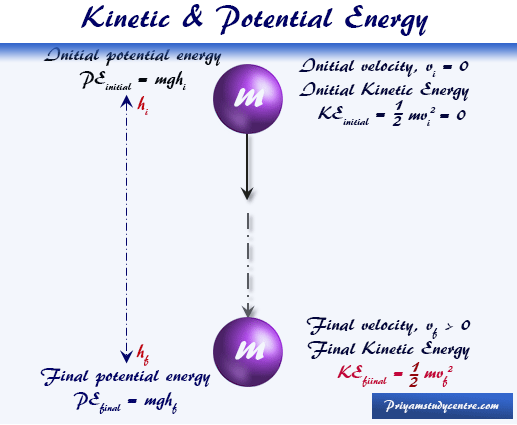 What is kinetic energy?

It is the type of energy produced due to the motion of objects. It can be defined and calculated by accelerating a given mass of the body from rest to an appropriate speed. Mainly three types of motion, rotational, vibrational, and translational created KE.

In classical mechanics, if the mass of the non-rotating body = m and speed of the body in a given time = v.
Then, KE = mv2/2
The accelerating bodies maintain their KE unless their velocity changes.

What is potential energy?

The potential energy (PE) formula in science was described first by 19th-century Scottish engineer and physicist William Rankine to define various forms of potential energies held by an object.

Gravitational, elastic, and electric energies are the common types or forms of PE. The common examples of PE are displacing the spring from its equilibrium position, lifting the weight, and turning the blades in the wheel.

Unit of heat, energy, and work

From the definition, it is the ability to do work. Therefore, the unit and dimension of work and energy are the same.

The most used units are joule, calorie, electronvolt, and kilowatt-hour with their conversion are given below the table,

Heat is another form that can be converted into all the other forms like electrical, chemical, mechanical, kinetic, or potential by producing work. The relation between heat and work is the origin of the first law of thermodynamics.

It states that if or whenever heat is obtained from work, the amount of heat produced is proportional to work spent. In another word, if heat is transferred into work, there is proportionality between the work obtained and heat disappearing.

Conversion of heat into work

Heat cannot be completely converted into work because any attempt to convert whole heat into work permanently changes the system or neighboring system. When two objects with different temperatures come together, one with a higher temperature losses heat, and the other gains it.

The production or conversation of heat into work is going through a definite process. For example, when a liquid molecule freezes into solid yielding heat or water freezes into ice producing specific heat.

These two examples suggest the conversion of electrical to mechanical energy or vice versa.

Redox reaction between chemical elements zinc and copper sulfate produces a large amount of heat. The same chemical change is carried out in electrochemical cell or batteries for the production of electrical current.

What is internal energy?

In thermodynamics, every system has within itself a quantity of internal energy. It can be obtained by common observations,

What is renewable energy? Renewable energy sources such as hydroelectric, wind, solar, biomass, and geothermal energy are the main examples of naturally replenished energy resources...