Silver is the shiny white, lustrous transition metal of Group 11 or IB in the periodic table with atomic number 47 and the symbol Ag. It is used from the ancient age to jewelry and coinage due to its decorative beauty. 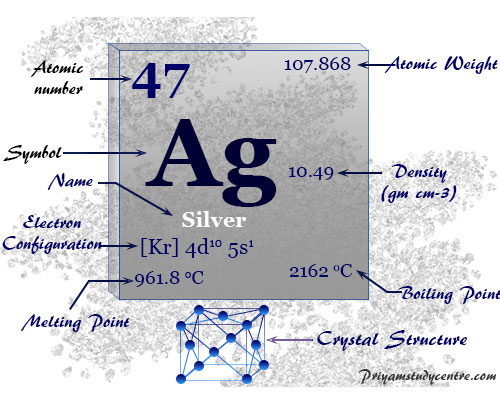 It forms an FCC crystal lattice with characteristic silvery-white colour.

Where is silver found?

The relative occurrence of metal in the earth’s crust is 0.08 ppm while that of gold is 0.004 ppm.

It is widely distributed in nature as sulfide ore like a silver glance or argentite (Ag2S). Horn silver (AgCl) is found in some minerals in Chile and New South Wales formed by the action of salt water. It is now largely discovered as a byproduct of the extraction of copper and lead.

Silver is found in various countries such as the United States, Canada, Peru, Mexico, Bolivia, and New South Wales. In India, it is obtained from Kolar gold mines produced from the smelting of Zawar lead ores.

Chemically, silver metal is a quite unreactive chemical element with a good conductor of electricity.

In learning chemistry, it dissolved in water to the extent of 0.07 mg liter−1 in presence of dissolved oxygen. It is attacked by atmospheric sulfur compounds, mainly hydrogen sulfide (H2S).

The 47 electrons of the silver atom are distributed in different energy levels to show the following electronic configuration given below the picture, 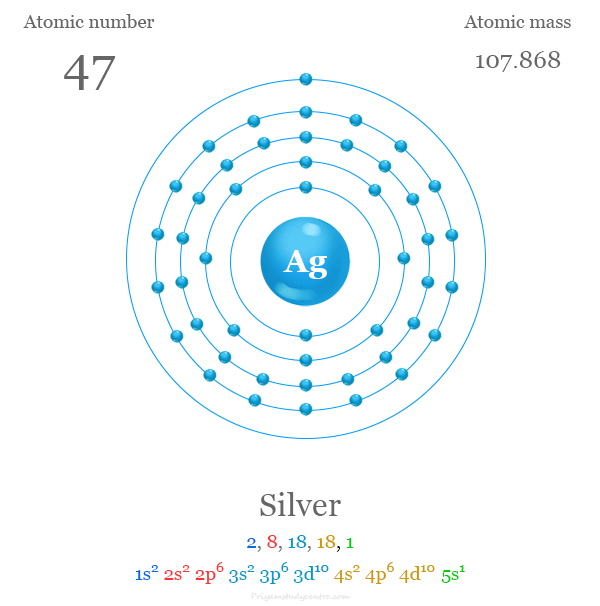 Silver in the periodic table

It is placed in group 11 in the periodic table with d-block elements. 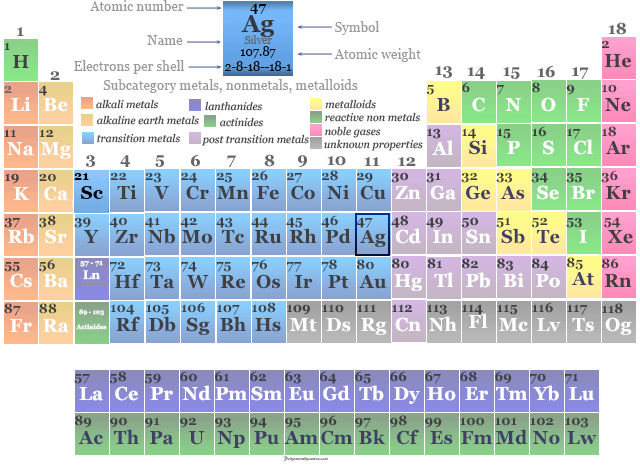 The atomic states of copper, silver, and gold or noble metal contain ns1 (n−1)d10 outer electron configuration or filled d-subshell. They are considered transition metals because, in +2 or +3 oxidation number or state, they possess incompletely filled d-orbital.

Extraction of silver from ore

The physical and chemical properties of silver are similar to the two vertical neighbors copper and gold on the periodic table. The higher effective nuclear charge or ionic potential and large shielding electron suggest that the covalent bonding of Ag and Au compounds are stable in +1 and +2 states.

The +1 state is the most common oxidation state of silver which offers oxides, sulfides, halides, and a number of oxoacids salts.

The salts are primarily ionic and quite soluble in water but Ag2SO4 and CH3COOAg are sparingly soluble in water. The halide (except AgF) is formed by covalent chemical bonding.

The facts are also described by hydration energy.

The dark brown silver oxide (formula Ag2O) is obtained by adding alkali to an aqueous Ag+ ion. It is more soluble in alkali than pure water owing to the formation of Ag(OH)2−.

Ag2O dissolves in ammonia to produce [Ag(NH3)2]OH. When the solution exposure to air, it deposits the black explosive silver nitride (Ag3N). It is called fulminating silver.

Moist Ag2O is used as a mild oxidizing agent for organic compounds.

A black oxide like AgO is formed by oxidation of Ag2O with ozone molecule or by electrolysis 2M AgNO3 solution.

Ag (II) compounds are obtained by direct oxidation or disproportionate of chemical element which is extremely unfavorable due to the low heat of hydration of Ag+2 ion.

AgF2 is the only known silver halide obtained by the action of fluorine on AgF or Ag at 250 °C temperature. It is used as a fluorinating agent.

Compounds of Ag (III) are very few, Ag2O3, Ag(OH)4−, KAgF4 or Cs2KAgF6 are the common examples of the +3 oxidation state of silver.

The formal oxidation number +1/2 is present in the yellow-green solid Ag2F.

Silver salts in an aqueous solution produce a curdy white precipitate of AgCl with chlorine ion. The precipitate is insoluble in nitric acid but readily dissolved in aqueous ammonia.

All the silver compounds produce a lustrous white malleable bed on heating with sodium carbonate on charcoal. The bead may be dissolved in nitric acid and tested with hydrogen chloride (HCl).

In learning chemistry or chemical science, silver may be estimated gravimetrically as chloride or by electrodeposition (coulometer), volumetrically.

The Ag+ ion forms a white precipitate of AgSCN but when the concentration falls below the solubility, the blood-red color of thiocyanate ions produce with ferric ion.