Penicillin is a generic term that refers to an antibiotic or group of antibiotics produced from various types of muds such as Penicillium notatum or Penicillium chrysogenum. Penicillins are a mixture of several types of closely related molecules with the molecular formula C9H11N2O4SR. A common list of six natural types of penicillins is given below 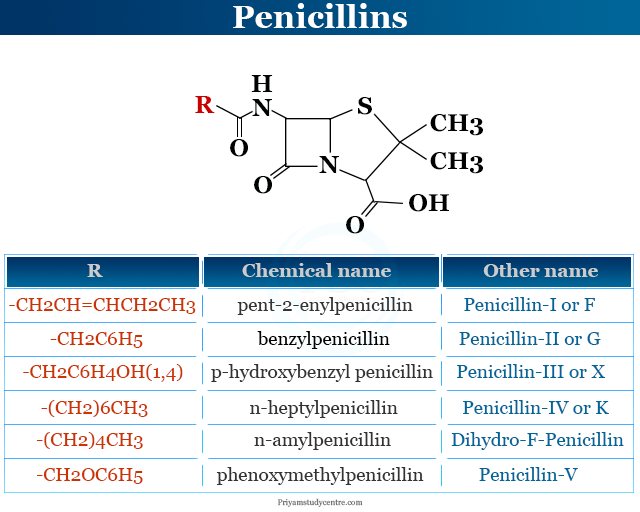 It is the first antibiotic that was discovered in 1929 by Scottish scientist Alexander Fleming. It is the least toxic among all the antibacterial drugs. Nearly five percent of patients receiving penicillin may suffer some side effects or allergic response.

Different types of penicillin obtained from mold penicillium are classified into two classes such as natural and semisynthetic penicillins.

How to make penicillin?

Various methods have been developed to make penicillin on a commercial scale. Commercially it may be made by three methods such as surface culture, Bran method, and submerged culture method.

It is the first method used to make penicillins on a commercial scale. Presently, the surface culture method is applied only for laboratory studies.

The moist brain is a good substance for the growth of molds. The resultant penicillin obtained by this method is extracted as a liquid.

Bran is a bad conductor of heat. Therefore, it is difficult to sterilize. Moreover, the developing molds made by the bran method produced heat which is partly destroyed penicillin.

The submerged culture method is the most important method for the production of penicillin.

In 1929, Fleming discovered a mold of Penicillium species that inhabits the growth of certain bacteria. Penicillins are used for treating bacterial infections but they do not respond to the virus and fungal infections.

One time penicillins are considered the queen of drugs. Semisynthetic antibiotics such as amoxicillin and ampicillin are the most commonly prescribed drugs today. These are used widely by doctors to treat a broad spectrum of respiratory infections, skin, and bacterial infections.

In general, the drugs are active against gram-positive microorganisms or bacteria. The gram-positive bacteria such as Clostridium, Listeria, Neisseria, Staphylococcal, and Streptococcal genus are treated by antibiotics penicillin.

A list of conditions and diseases that respond to penicillin therapy include,

Other dosages of penicillin are formed by suspension of salts in oil or wax for intramuscular injection and buffered oral tablets. The dosage accompanied by the use of very insoluble salts of penicillin has permitted the attainment of high blood levels over a long period of time.

It is the least toxic of all antibacterial drugs. Nearly five percent patient receiving the drug penicillin sufferers from some side effect or allergic response.

Difficulty breathing, swelling of your face, lips, tongue, or throat are the most common allergic sign of penicillin. Therefore, call the doctor if you feeling any side effects causes by the reaction of penicillin.

Another problem commonly faced in its use is due to the presence of a large number of penicillin-resistant organisms in our bodies. This drawback can be overcome by the new discovery of broad-spectrum penicillin antibiotics.

What is Electrophoresis? Electrophoresis in analytical chemistry is the technique of analysis or separation process of dispersed particles present on fluid under the influence of...