What is Dalton atomic theory? 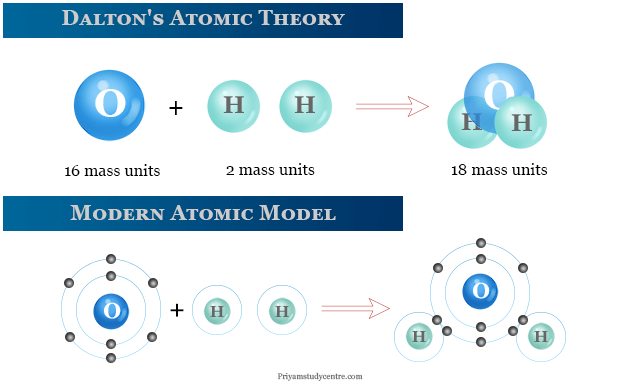 The modern atomic structure clearly indicates an atom composed of subatomic elementary particles such as electron, proton, and neutron.

Today electrons hold the key to structure and chemical bonding. The most important factor in physics and chemistry for the determination of the structure has been given by the study of the electromagnetic spectrum emitted or absorbed by atoms. Therefore, the modern structure investigated by electronic configuration and atomic spectrum is different from Dalton’s atomic model.

For learning chemistry or physics, Dalton’s atomic theory or model is based on the following postulates or assumptions,

Science goes step by step and every scientist depends on the work of his predecessor. This century Rutherford model or alpha ray scattering experiment has given valuable information about the nucleus of an atom and extranuclear electrons.

Rutherford atomic model is based on the following assumption,

Rutherford’s model does not conform to the classical model of electromagnetic radiation. When a moving charged particle will emit radiation, the particle loses kinetic energy and hits the nucleus.

Niels Bohr proposed the structure of the hydrogen atom (one electronic atom) is called Bohr model. It is based on the following postulates,

Structure of atom in chemistry

The modern structure of atoms is based on quantum numbers of electron orbitals and electron configurations. These factors explain the chemical properties and position of the elements on the modern periodic table. The modern atomic structure is based on s-, p-, d-, f-block elements classified on the basis of the number of electrons in the outer quantum shell or energy levels in inorganic chemistry.

de Broglie Hypothesis de Broglie wavelength relation pointed out that just like photons of light, electron has also both particle and wave properties of matter....