Electrophoresis in analytical chemistry is the technique of analysis or separation process of dispersed particles present on fluid under the influence of the electric field due to different rates of migration. Capillary and gel electrophoresis are the most common types of electrophoresis which we used for the separation of ions.

In recent years exciting discoveries have been made in the field of gel and capillary electrophoresis. The choice of gel largely depends upon the molecular size and chemical properties of substances to be separated.

Gel and capillary electrophoresis principle or apparatus are widely used for the analysis and separation of biomolecules such as DNA, RNA, colloids, proteins, and enzymes.

Gel electrophoresis is a technique that works for fractionating substances such as proteins, enzymes, DNA, and RNA according to their molecular sizes.

The following process is used in the gel electrophoresis technique, 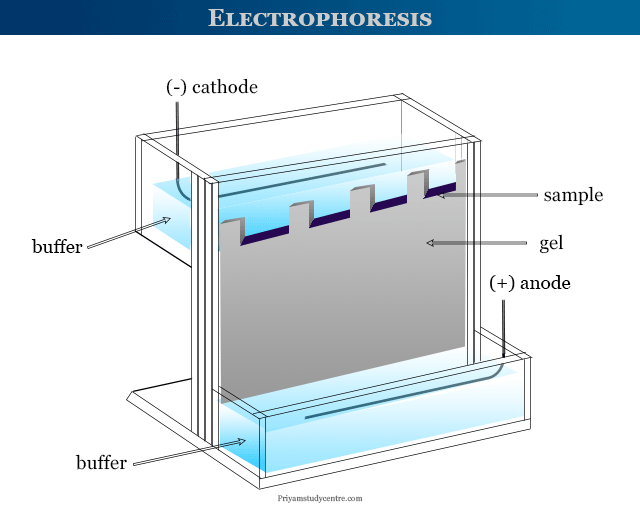 It has a stationary phase consisting of a heterogeneous cross-linked polymer gel. Agar, agarose, and polyacrylamide are the most common types of gel which we used in electrophoresis instruments.

They are available in the market under the trade names,

The mechanism is based on the different permission rates of each solute molecule in the interior gels.

Buffers in gel carry current and are used to maintain the pH value. It contains plenty of ions that carry a passage of electricity. For analysis of nucleic acids such as DNA or RNA, we used Tris/Acetate/EDTA (TAE) or Tris/Borate/EDTA (TBE) as a buffer.

If a charged foreign phase is subjected to a potential gradient, the foreign phase migrates through a continuous medium to the electrode according to the sign of the charge on the particle.

It establishes the basic concentration gradient across the system. Colloids, proteins, DNA, RNA, and enzymes show particular electrophoretic mobilities and isoelectric points. These properties can be used for the identification of substances.

Generally, the term electrophoresis is used for the transport of charged solutes through paper or gels under the influence of potential gradients.

The migration of charged particles through the instrument depends on the surface, changes, applied voltage, electrolytic concentration, ionic strength, pH scale, viscosity, and other properties of the migration medium. Ions migrating in one direction are affected by the ionic mobility of other ions moving in the opposite direction.

Some important applications of the techniques are given below,

One of the most important applications of electrophoresis is the analysis of DNA and the study of DNA fragments. On the application of an electric field, DNA or deoxyribonucleic acid breaks down into large and small fragments.

It occurs because different parts of DNA fragments are affected by different scales of electric current. Now gel electrophoresis is used to separate and analysis of different fragments of DNA samples.

Application of electrophoresis on proteins

Immunoelectrophoresis is a common type that we used to analyze the unusual behavior of proteins. Irregular proteins are formed due to different types of medical conditions such as kidney failure, multiple sclerosis, and certain types of cancers. These irregular proteins can be detected with the help of immunoelectrophoresis of blood and urine samples.