What is ion exchange resin? 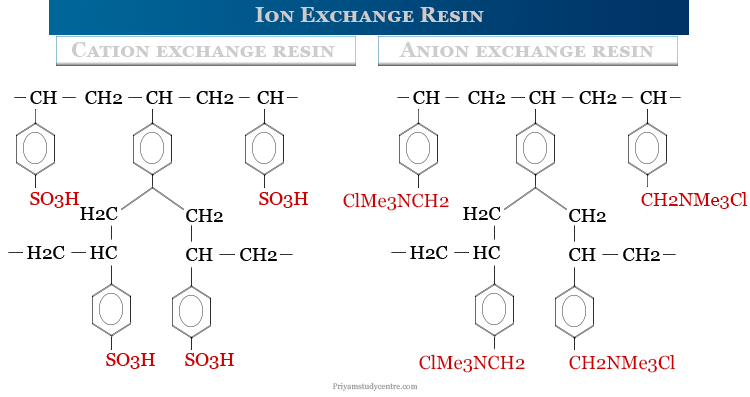 Usually, they are white or yellow fabricated organic compounds or polymers that are insoluble in common solvents. Ion exchange resins are widely used for the purification or separation of protein or amino acids, water softening, and separation of metal.

The discovery of ion exchange resin is accidental. England agricultural chemist, Thompson and way notice the exchange properties of soil samples by adding fertilizer like ammonium sulfate. The exchange of sodium and calcium in soil indicates the phenomenon of ion exchange.

All the resins have reactive OH, COOH, and HSO3 groups in exchange sites. The labile ion is a hydrogen ion in cation exchangers and a suitable anion in anion exchange resins. Resins with sulfonic groups or quaternary amine groups are highly ionized, insoluble, and reactive.

Depending upon the type of labile ions exchanged by the resins, they have been classified into two types,

For the water softening, we used natural or artificial zeolites as synthetic cation exchange resin because they are regenerated many more times.

An anion exchange resin is a polymer having amines or quaternary ammonium groups in a polymeric network.

A significant application of both cation and anion exchange resin is softening or deionization of water. Depending upon the labile groups, ion exchange resins are broadly classified into four groups.

The idea of ion exchange resin first comes from the agricultural investigation. This time, the process is used widely for the analysis of micronutrients in soils.

A significant application of ion exchange resin is softening or deionization of water. Temporary hardness caused by calcium or magnesium bicarbonate can be easily removed by boiling or the addition of lime water.

Ion exchange resin is used for removing poisonous metal ions such as copper, lead, and cadmium from water. They can be replaced by sodium or potassium ions.

For the purification of domestic water, we used activated charcoal mixed with resin. It can be removed chloride ions and organic impurities from water.

For example, the plutonium-uranium extraction process is used for the separation of plutonium and uranium. These two radioactive metals are widely used as fuel in nuclear power reactors.

Some examples of ion exchange resins and their applications are given below the table,

The cation exchange chromatographic method is used for the separation of magnesium, calcium, strontium, and barium by Dowex 50 with ammonium lactate buffer at pH scale 7.

The elements with similar chemical properties like zirconium, hafnium, niobium, and tantalum can be also separated by ion exchange resin.