What are energy types? 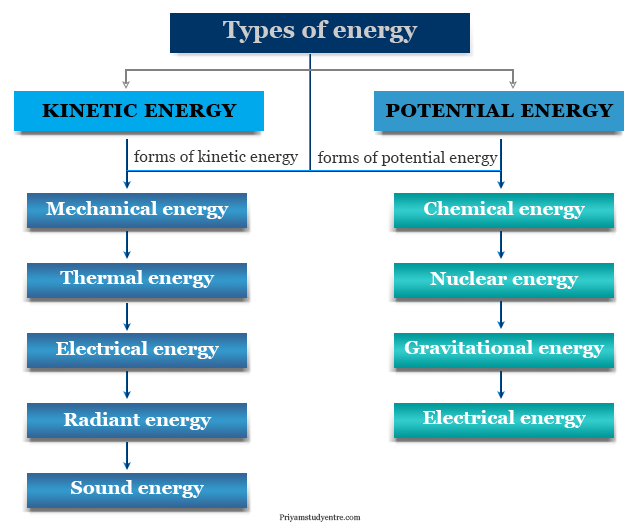 These various kinetic or potential forms of energy have been obtained from various natural phenomena. According to the law of conservation of energy, each of these forms is converted to another form.

The Law of conservation of energy states that energy can neither be created nor destroyed but may be transferred from one form to another. For example, when we burn wood or fuel like gasoline or natural gas, it changes chemical energy to thermal or mechanical energy.

All states of matter contain heat energy and transferred from one object to another. The transfer or flow of energy due to the difference in temperature between the two objects is called heat. It causes the movement of atoms, molecules, or ions in solids, liquids, and gases.

Kinetic energy is a type of energy that is obtained by the motion of an object. For example, walking, falling, flying, and throwing.

It is also defined as the work required to accelerate a body of a given mass from rest to its stated velocity. After gaining this energy, the body maintains a fixed kinetic energy unless its speed changes.

In physics or chemistry, potential energy is the energy held by an object due to its position relative to other objects. Gravitational, elastic, chemical, and electric potential energies are the common types of potential energy that can be measured by unit (SI) joule.

It is stored energy that can be measured by the amount of work done by the object. For example, books on a table, water in a lake.

Gravitational potential energy can be calculated by the equation,
PE = mgh
where m = mass of the object
g = acceleration due to gravity
h = height.

Chemical potential energy is a form of energy stored within a chemical substance or molecule due to chemical bonding between atoms. It can be absorbed or released during chemical reactions or heating.

Batteries, food, fuels, and oxygen gas are the most common media for storing or conversion of chemical energy.

Electrical energy is the form of potential energy resulting from the flow of charged particles. It is the most common form which can be easily converted into other forms of energy.

Electricity generation is a process that produced electrical energy from other types of energy. Electricity is generated by electromechanical generators that are driven most commonly by fossil fuels, nuclear fuels, water, and wind flow.

Mechanical energy is the sum of potential and kinetic energy obtained by the motion and change of position of an object.

Radiant energy is the form of energy produced from the movement of electromagnetic waves or light. It is most commonly used in the fields of radiometry, solar radiation, heating, and lighting.

Visible light such as sunlight carries radiant energy which is stored as chemical energy through photosynthesis.

Hot tea is cool in the room due to the loss of some thermal energy. Therefore, heat flows from the tea to the room by slowing the vibration of tea molecules over time. The tea cools to the same temperature which carries by the room.

It is the form of energy released due to the splitting of atomic nuclei. We used nuclear fission reactions for the production of usable nuclear energy. The nuclear fusion reaction that occurs in the interior of the sun is the main source of energy for our earth.

Different forms of energy sources which we used in our daily life can be classified into two types:

A non-renewable source is a finite natural resource of energy that cannot be readily replaced after its consumption. The by-products of non-renewable energy resources may cause environmental pollution but most of the energy used by human society comes from nonrenewable resources of energy.

Four major types of nonrenewable resources that are used widely to fulfill our daily needs are oil, natural gas, coal, and nuclear energy.

Oil, natural gas, and coal are collectively called fossil fuels that formed from dead plants and animals over millions of years. The energy obtained from fossil fuels is originally coming from the sun because solar energy is stored in plant tissue through the process of photosynthesis.

When animals consume these plants based foods, they add this energy to their own bodies. After burning fossil fuels, this trapped energy is released and used according to our daily requirements.

These fossil fuels are found in underground layers of rock and sediment. Pressure and heat worked together for the transformation of dead plants and animals into crude petroleum oil, coal, and natural gas.

Nuclear fuels are materials used in nuclear power stations for the production of electricity from the heat by turbines. Heat is generated when fuels in nuclear power plants undergo nuclear fission.

Uranium is the most common fission fuel and is present in our earth’s environment. Nuclear power obtained from nuclear fuels provides a significant part of electricity in various counties of the world. 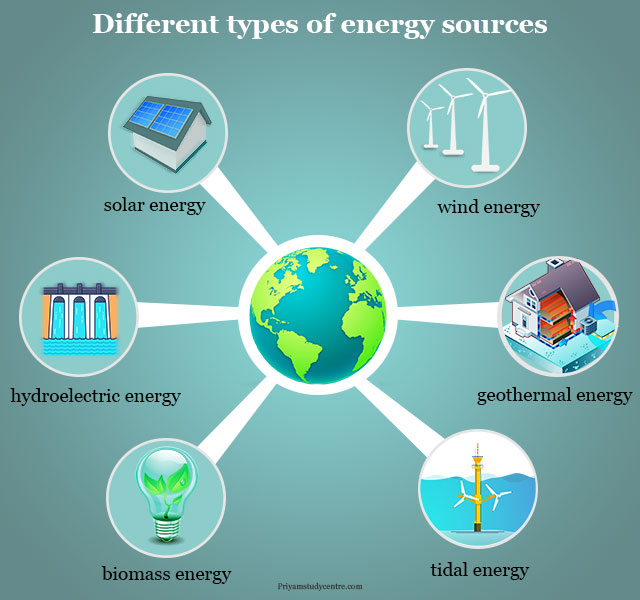 Renewable types of energy are clean sources of energy that are obtained from infinite natural resources and replaced after their consumption. The most popular energy obtained from various types of natural phenomena such as sunlight, wind, water flow, tides, plant growth, and geothermal heat may include:

Natural resources such as wind, water, solar, biofuel, and geothermal energy are types of renewable sources because these sources can be renewed by natural processes or they can be continuously available in nature.

Solar energy is a form of renewable energy that converts sunlight into solar power through solar technologies. It is an example of sustainable energy that helps with lowering electricity bills and carbon footprints in our enviourment.

Solar power is the conversion of energy obtained from sunlight into electricity. A large magnitude of solar energy is used as a source of electricity in different parts of the world. Active solar technologies may use photovoltaic (PV) systems, concentrated solar power, and solar water heating systems to acquire such types of energy.

Wind power is a form of energy that uses the kinetic energy of air for generating electricity by wind turbines. Historically, wind power is used for milling and pumping.

The power obtained from wind depends mainly on airspeed and geological location. Therefore, the areas where wind flow is stronger and more constant are preferred locations for wind farms. Wind-generated electricity contribute a significant amount of electricity required in the United States and other well-developed counties.

Hydropower or hydroelectric power is one of the common and oldest types of renewable energy sources that uses the natural flow of moving water for generating electricity by turbines. A significant part of global electrical energy demand may be fulfilled by hydroelectric power plants situated in various parts of the world.

After the development of modern technology, a type of power produced by the natural rise and fall of tides due to gravitational interaction between the earth, sun, and moon. The tides of ocean water are used to transform mechanical energy into electricity in a variety of ways.

What is Chemistry? Chemistry is the study of pure science that deals with the physical or chemical properties, reactions, composition, and structure of atoms, ions,...