What is ion exchange chromatography? 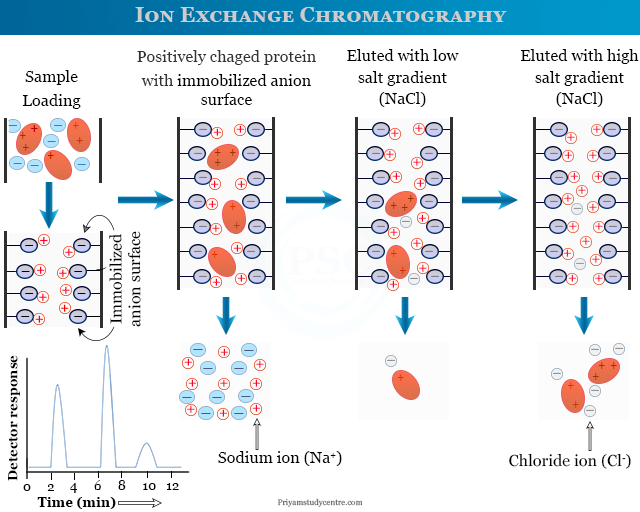 The ion exchange chromatography procedure is used for the purification of protein in the following way,

Various factors influence the behavior of elution. The volume of eluent increases when the particle size of the ion exchanger increases.

The pH scale value is used to elute protein on the basis of its isoelectric point. At an isoelectric point, amino acids in the protein molecule do not carry any change and they do not migrate towards an electric field.

In ionic crystals such as potassium chloride, each potassium ion (K+) is surrounded by eight chloride ions (Cl−). When we placed a medium with a high dielectric constant like water, the net attractive forces between the ions are reduced. Therefore, an exchange of ions in the solution is carried out. If we added NaNO3 in KCl solution, potassium ion exchange with sodium ion and Cl− exchange with NO3− ion.

The mechanism of noncrystalline ion exchange resin is quite similar to that of an ionic crystal. The resins are high molecular weight insoluble polymers or electrolytes. The functional groups such as HSO3H, COOH, and OH are responsible for exchanging ions.

When we added a foreign ion to the external solution, new ions will enter the outer layer by replacing some ions held on the layer. A new equilibrium is set up and the overall exchange is stoichiometric.

Donnan membrane theory deals with the unequal distribution of ions on two sides of a membrane. One side contains an electrolyte whose ions cannot penetrate through the membrane.

In ion exchange equilibria, the interface between solid and liquid phases may be considered a membrane.

The name ion exchange resin suggests that constitute contains resinous polymers which are capable of exchanging ions. Depending on the types of ion exchange, there are two types of resin, 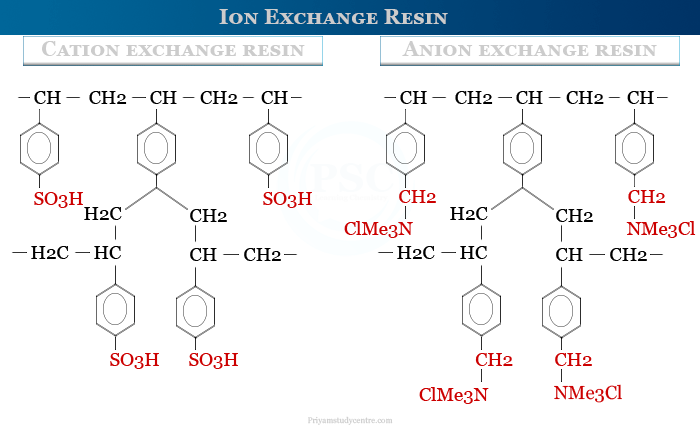 A common synthetic cation exchange resin is obtained by polymerization of styrene and a small amount of divinylbenzene followed by sulfonation. Hydrogen ion (H+) is the exchangeable cation of this resin.

When we treat this resin with Na+ ions, its H+ ions will be replaced by sodium ions. In cation exchange, usually, the cation with high valency is strongly retained but monovalent ions are easily removed.

An anion exchange resin is a polymer having amines or quaternary ammonium groups contained in the polymeric network. In this resin chloride ion is an exchangeable ion and the rest is non-exchangeable. In anion exchange procedure, an anion with a high charge is strongly retained.

A schematic diagram of overall ion exchange chromatography instrumentation is given below the picture, 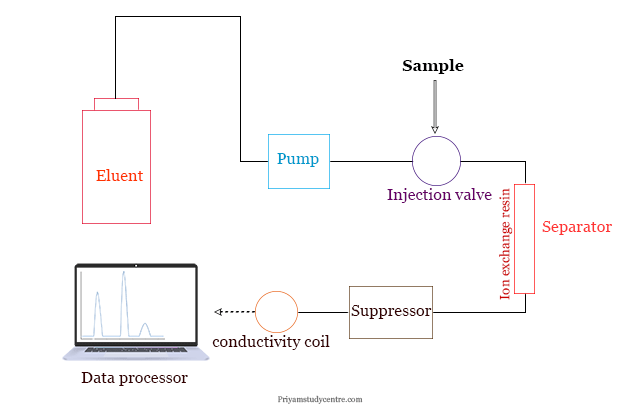 Apart from the separation of cations and anions in analytical chemistry and biological chemistry, it is also used in different fields such as medicine, agriculture, pharmaceutical, and petrochemical industries.