What is capillary electrophoresis? 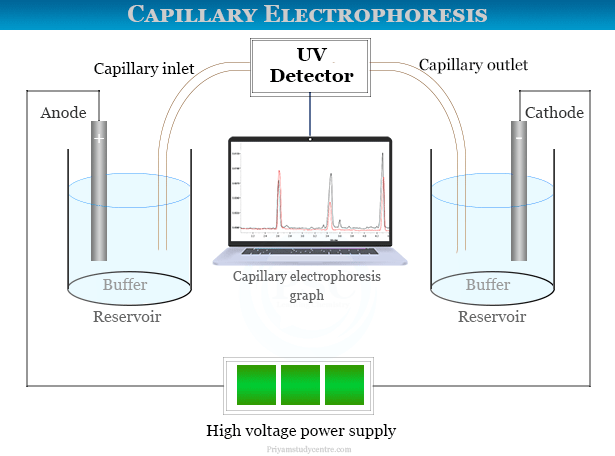 One can analyze 10−9 nanolevel materials with a detector sensitivity of 10−18 nanolevel by a capillary electrophoresis instrument. It is a principle in which charged species are separated based upon ionic mobility or difference in migration rate under influence of the electric field. Inorganic cations like lithium, sodium, potassium, and magnesium ions are also separated by CZE.

The volume of the sample introduced one end of the capillary and the other end immersed in buffer solution. A high voltage current with the potential of 1000 to 30,000 volts is supplied to the capillary zone electrophoresis instrument.

Normally, the detector used to perform the process is an ultraviolet-visible absorption type. A focused laser beam is passed through the optical fiber coupled to a photomultiplier tube. Sensitive detection is possible due to the very low path length of 10 to 100 μm. The detector can be sent the data to an output device such as an integrator or computer.

The data sent from the detector can be displayed as an electropherogram given above the picture. Fluorescence detection can also be used in capillary electrophoresis instruments for the samples which naturally fluoresce. For example, in DNA sequencing, we used fluorescent detection.

Fused silica capillaries are used with an ionizable silanol group. At pH scale 2.0, SiOH produces a negative charge on the capillary surface. It is called zeta-potential. It creates a double layer for cation accumulation with a high voltage electric current.

During capillary electrophoresis, positive charges migrate towards the electrode or cathode. The buffer facilitates the flow of such cations. It results in a unidirectional flow of all ions from the analytic sample.

The velocity of migration of samples in fused silica capillary depends on the rate of electroosmotic flow of buffer solution. 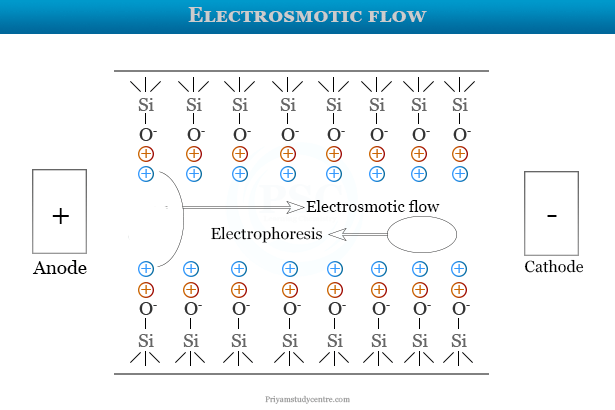 The first layer given above picture is a fixed layer. It is bound tightly to the silanol group. The outer layer is called the mobile layer which further forms a silanol group. When an electric field is applied, the cations on the mobile layer flow to the negatively charged cathode. It causes the electroosmotic flow of the buffer solution. Initially, most positive ions are detected while negative ions are detected later.

By this technique, we can easily separate and analyze DNA, RNA, and a mixture of 18 amino acids. It does not involve chromatographic distribution. Therefore, it is used for macromolecule separation.