Bohr Model of hydrogen atom was adopted by Neils Bohr in 1913 for the explanation of the Rutherford model and the atomic energy levels of the hydrogen spectrum. According to classical mechanics, when a charged electron is subjected to acceleration, it emits radiation and energy released to hit the nucleus of an atom. Therefore, according to Rutherford atomic theory, the electron loses energy continuously and the observed spectra should be continuous spectra. But the actual electromagnetic spectrum of the hydrogen atom consists of well-defined lines with definite frequencies and wavelengths.

For an explanation of the atomic spectrum, Bohr adopted the Rutherford nuclear model for the hydrogen atom or one electronic system in which an electron revolves around the proton of the nucleus. The Bohr atomic model of hydrogen atom alike with the solar system of our planet is based on several postulates which are proved by wave mechanical consideration in chemistry or physics. 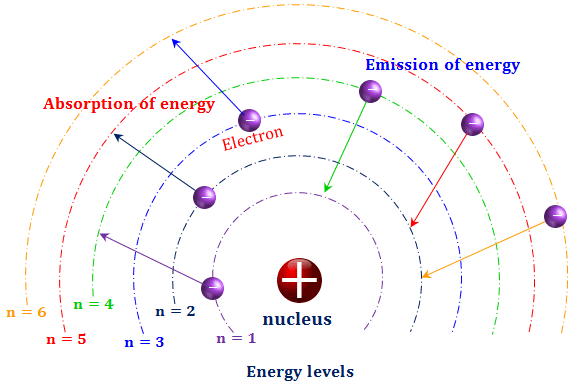 Let the nucleus has a mass m′ and the electron has mass m, the radius of the circular orbit = r, and the linear velocity of the electron = v. 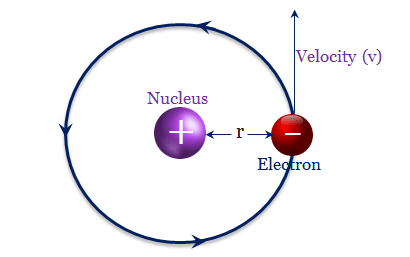 The remarkable study from Niels Bohr’s atomic theory, the angular momentum of the electron is an integral multiple of h/2π. Therefore, mvr = nh/2π, where mvr = angular momentum and n = principal quantum number having the values 1,2,3, ……∞.
If we putting the value of v on the Bohr force equation, the radius (r) = n2h2/4π2me2.

Velocity of electron in Bohr model

From the principle of quantization to the revolving electron in the hydrogen atom, mvr = nh/2π. When we putting the values of r in mvr = nh/2π and solving, we have velocity (v) in the Bohr model = 2πe2/nh. Therefore, the velocity of the second orbit will be one-half of the first orbit and one-third of the first orbit, and so on.

Energy of electron in Bohr model of hydrogen 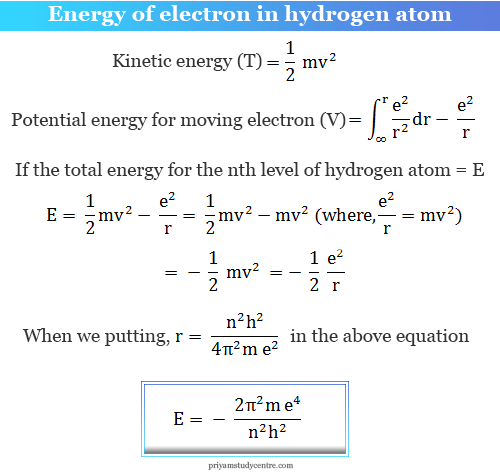 In learning chemistry, En = E1/n2, where E1 = energy of the first orbit of the hydrogen atom in the Bohr model. As the principal quantum number (n) increases the energy becomes less negative and hence the Bohr system becomes less stable. Because with increasing n, r also increases and orbit makes less stable. If the energies associated with 1st, 2nd, 3rd,…., nth orbits in the Bohr model are E1, E2, E3 … En, hence, E1ㄑE2ㄑE3ㄑ……..ㄑEn.

Question: H, H+, He+, and Li+2 – for which of the species Bohr’s model of the hydrogen atom is not applicable?

Answer: From the above species H, He+, Li+2 contain one electron but H+-ion has no electron. Bohr’s model of hydrogen atom is applicable to the one electronic system in physics or chemistry but for H+-ion Bohr atomic model is not applicable.