Energy of electron in orbitals

It is difficult for the readers to remember the orbital energy diagram for many-electrons atoms. Thus a trivial way to remember these energy levels provides below this diagram 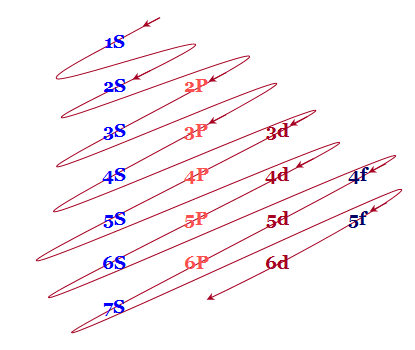 No two electrons of the atom can have the same four quantum numbers.

An alternative statement of Pauli exclusion principle, no more than two electrons can be placed in one and the same orbital.

Electron configuration and the periodic table

Group 1 and 2 belong to s-block elements in the periodic table with one or two-electron or electrons in outermost s orbital. Thus the general electronic configuration of s-block elements

Electronic configuration of the P block

The first metal in the first transition series starts with scandium and ending with zinc.

When the twenty-first electron goes to the next available higher energy 3d orbital and five 3d subshells with the capacity of ten electrons. Therefore the general electron configuration of 3d block elements are