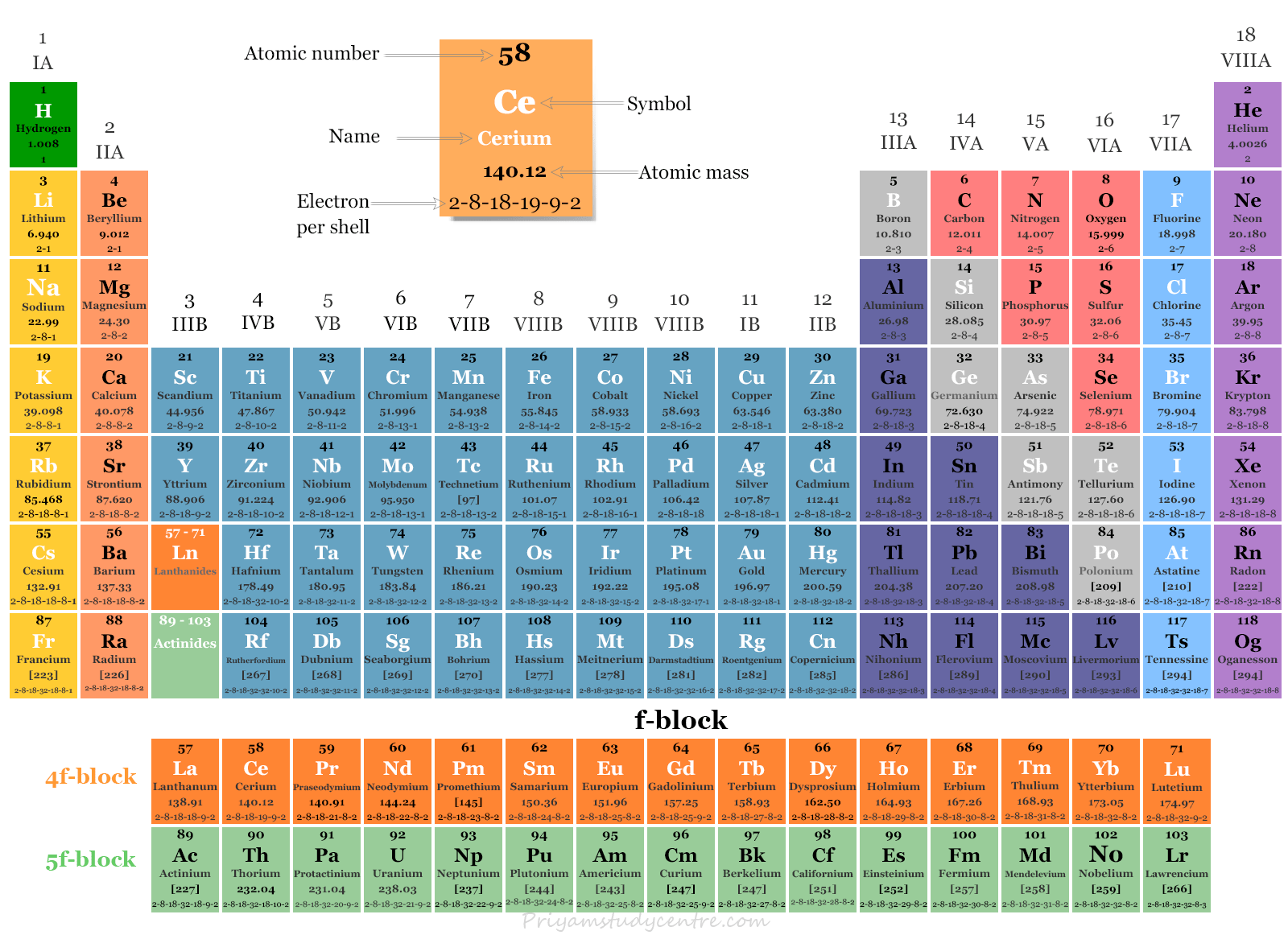 The electronic configuration of the f-block chemical elements (lanthanum and actinium) has been done by filling electrons in deep-seated 4f and 5f orbital with the increasing atomic number. The trivalent oxidation number or state of all f-block elements is a stable or common oxidation state. 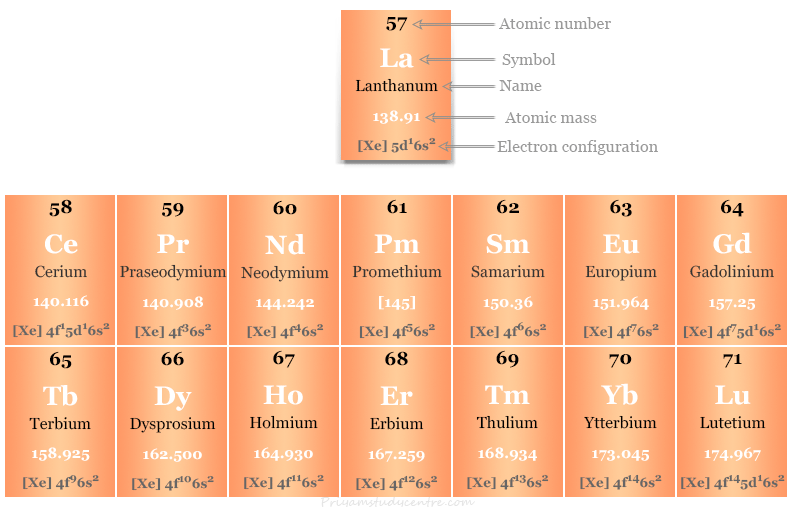 The 4f block contains fourteen chemical elements cerium to lutetium with an atomic number from 58 to 71. These f-block chemical elements are known as Lanthanum or rare-earth elements because they appear after lanthanum.

The element lanthanum is also placed with lanthanide series because the chemical and physical properties of fifteen elements, 57La to 71Lu have very similar. 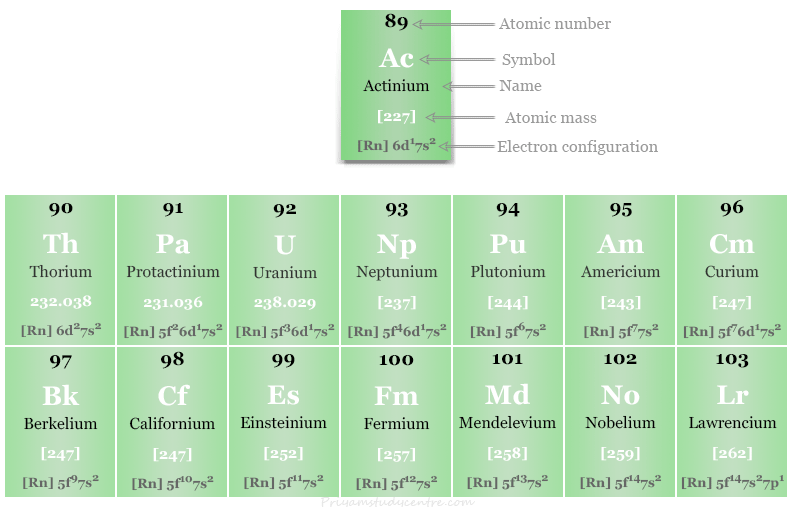 The 5f block contains fourteen chemical elements thorium to lawrencium with atomic numbers 90 to 103. These f-block elements are known as actinides because they appear after actinium.

Actinium is also placed with actinide series because the physical and chemical properties of fifteen elements, 89Ac to 103Lw are very similar.

The f-block chemical elements like lanthanides behave as active metals. Therefore, the redox reaction potential of these elements is comparable to alkaline earth metals. All the f-block metals act as strong reducing agents and chemical reactions with acids by the liberation of hydrogen ions. Hence they absorb hydrogen ions from low pH scale solutions to form interstitial hydrides.

The 4f block elements in the periodic table have been variously called rare earth, lanthanum’s, and lanthanum.

The name rare-earth for f-block has been given because they are originally extracted from oxides for which ancient name earth and which are considered to be rare in earth environment. The term rare earth is now avoided because many of these elements are no longer rare but are abundant.

f-block chemical elements like cerium, gadolinium, and Lutetium in the periodic table contain one electron in 5d orbital with atomic numbers 58, 64, and 87. Therefore, the electron configuration of cerium, gadolinium, and lutetium is outside of the general electronic configuration. Because electrons of similar spin developed an exchange interaction which leads to stabilizing the system.

The f-electrons of similar spin, repulsion is less by an amount called the exchange energy of an electron. But the greater the number of f-electrons with parallel spins the greater of exchanged interaction and greater stability. This is the basis of Hound’s rules and uses to derive the electronic arrangement of Cerium, Gadolinium, and Lutetium.

The cerium atom contains one electron in a 5d orbital. But 4f and 5d energy levels are very close in terms of energy. Therefore, the half-filled orbital f-block chemical element like cerium is slightly more stable than the orbital with one additional electron.

Gadolinium contains seven electrons with a parallel spin in the seven f-orbitals with the maximum stability of the f orbital. Here the half-filled energy level stabilizes by exchange energy in the 4f orbital of the gadolinium atom.

Praseodymium in f-block possesses electronic configuration 4f3 6s2 instead of the expected one 4f2 5d1 6s2. This can be explained by (n + l) rules. The orbital which has a higher value of (n + l) is the higher energy orbital.

The stability of electrons in the f orbital of lanthanides is greater than the d and s electrons. Therefore, the f electrons can not participate in the chemical bonding and the +3 oxidation number or state is common for lanthanides.

Position of actinides in periodic table

The highest atomic number of naturally occurring actinides (f-block elements) = 92. For this reason, uranium occupies the last position in the periodic table for a very long time.

Since 1940 seven chemical elements from neptunium to lawrencium have been identified and synthesized by the transformation of naturally occurring elements by the emission of alpha, beta or gamma rays.

These men made eleven radioactive isotopes that are placed beyond uranium in the periodic table and are collectively called trans-uranium chemical elements. The absorption spectra of f-block actinides ion and crystalline solid chemical elements contain narrow bands with visible, near-ultraviolet, and near-infrared spectrum in electromagnetic spectrum radiation.

de Broglie Hypothesis de Broglie wavelength relation pointed out that just like photons of light, electron has also both particle and wave properties of matter....