Oxidation number or state of periodic table elements in a chemical compound or molecule is the formal charges (positive or negative) which assigned to the element if all the bonds in the compounds are ionic. In chemistry, the oxidation number or state defined as the total number of electrons loses or gains by atoms or ions for the formation of the chemical bond. The less or more electronegative partner of a binary compound arbitrary assigned positive or negative oxidation numbers or states of the periodic table chemical elements. Halogen like fluorine (F) chlorine (Cl), bromine (Br) are highly electronegative, and crystalline solid metals like sodium (Na), aluminum (Al), potassium (K), calcium (Ca) have highly electropositive, hence halogen atom commonly show negative and metals elements commonly show positive oxidation state or number.

Some general rules are used to find the oxidation number of s, p, d, and f-block elements in the periodic table. To determine or balancing common redox reactions, we used the oxidation number method because some of the reactions can not be explained by electronic formula or classical concepts in chemistry. For example, a water molecule formed by bonding hydrogen with oxygen, and hydrochloric acid is formed by bonding hydrogen with chlorine. The formation of water (H2O) and hydrochloric acid (HCl) molecules can not be explained from the classical definition but easily explained by oxidation number rules.

How to find the oxidation number of elements? 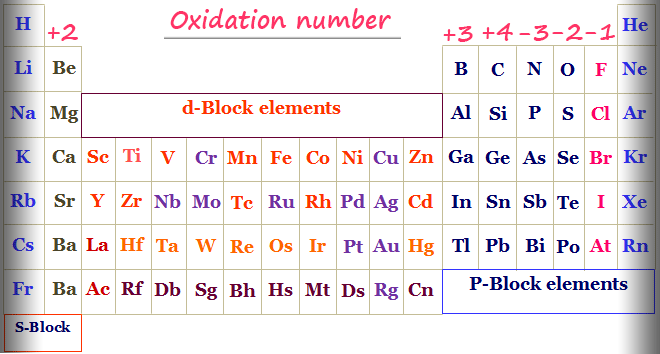 The oxidation numbers formula also easily predicts the oxidizing agent reducing agents in the chemical reactions and balancing equations in a more convenient way. Some general rules and practice examples are given in these online chemistry learning courses for calculating the oxidation number of periodic table elements, ions in the compounds or molecules.

The electron configuration of hydrogen, 1s1. Therefore, hydrogen has a single electron particle in outer quantum shall Like alkaline earth metals and hydrogen has just one electron short of the next noble gas helium like halogen series. Hydrogen can easily lose one electron to show the oxidation number +1, electron affinity to gaining to show the -1 state.

Oxidation Number in Superoxide and Peroxide

Oxidation Numbers of Atoms in Compounds

Both nitrogen in ammonium nitrate

Both chlorine atoms in bleaching powder

In bleaching powder, chemical formula Ca(OCl)Cl, one chlorine combine with oxygen to form OCl– ion and another chlorine atom form Cl– ion with the oxidation number of chlorine = +1 and -1 respectively.

Oxidation numbers of the list of hydrocarbon or carbon compounds like methane (CH4), methyl chloride (CH3Cl), dichloromethane (CH2Cl2), chloroform (CHCl3), and carbon tetrachloride (CCl4) are -4, -2, 0, +2, +4 respectively.  But Sugar, glucose, formaldehyde, etc are the examples in organic chemistry where the oxidation number or state of chemical element carbon on these compounds is always zero. 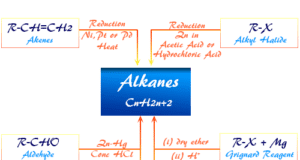 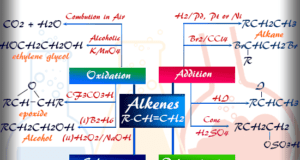 Properties of Alkenes in Organic Reaction Properties of alkenes or olefin and alkanes or paraffin in organic chemistry are very similar since the hydrocarbon alkene... 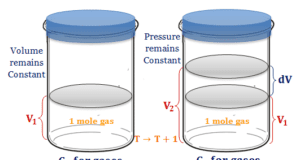 Definition of Specific and Molar Heat Capacity Heat capacity (Specific) of gases is defined as the amount of heat required to raise the temperature of one... 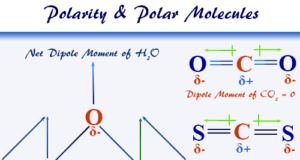 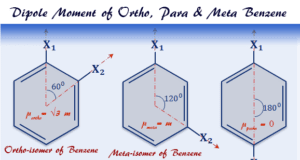 Dipole Moment of Benzene Ring in Molecules Dipole moment of molecules like benzene zero suggested that the benzene ring has a regular hexagonal planner aromatic structure...