What is electron affinity?

Electron affinity (EA) or electron gain enthalpy or simply affinity in the periodic table defines the amount of energy released when an electron is added to an isolated neutral gaseous atom in its lowest energy level (ground state) to produce an anion. In ionization energy, energy is supplied to remove one or more electrons from an atom or a cation. In electron affinity, the energy is released with the addition of one or more electrons in an atom or anion.

The above electron affinity equation is an exothermic reaction with the negative sign according to the usual thermodynamics convention in chemistry but the measurement of affinities is always the positive value.

Electron affinity value measured by unit eV per atom or kJ mol−1. The periodic table trend of EA is affected mostly by the atomic size, shielding electron, and electron configuration.

How to calculate electron affinity? 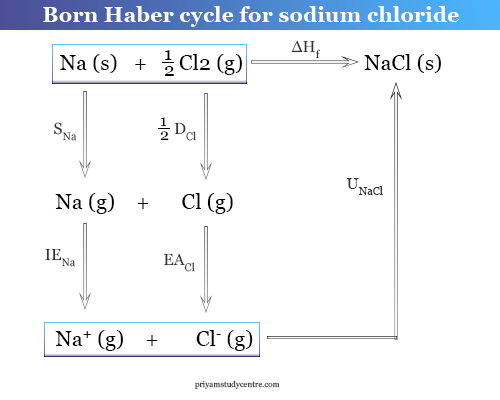 The formation of sodium chloride crystal lattice from sodium and chlorine atom is given below the table,

Putting the values from the above table, the calculated value of ECl = −348.6 kJ mol−1.

It is difficult to obtain but measure from the indirect measurement of Born-Haber energy cycles in which one step is electron capture reaction. Affinities are also measured by direct study of electron capture from heated filaments.

The second method determined the number of neutral atoms, ions, and electrons with the mass spectrometer in the electromagnetic spectrum radiation. This gives the standard free energy for the equilibrium reaction. The free energy is calculated from the temperature dependence of the chemical equilibrium constant.

The electron affinity trend in the periodic table is influenced by the following factors,

Larger the atomic size lesser the tendency of atoms to attract the additional electrons towards themselves. Which decreases the force of attraction exerted by the nucleus of an atom. Therefore, the electron affinities decrease with increasing the size or radius of an atom.

Higher the magnitude of effective nuclear charge (Zeff) greater the tendency to attract the additional electrons towards itself. The greater force of attraction is exerted by the nucleus of an atom. As a result, higher energy is released when extra electrons are added to an atom.

Hence the magnitude of the electron affinity of periodic elements increases with the increasing effective nuclear charge of an atom.

The magnitude of EA depends on the electronic structure or configuration of an atom.

Hydrogen atom when gaining one electron to form H− ion. It has a very low EA (73 kJ mol−1) due to the formation of stable alkali hydride. The electric polarization of hydride ions is also very high. 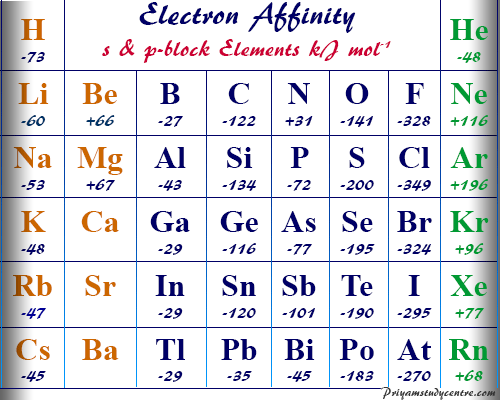 When we move down a group in the periodic table, the size of atoms generally increases with increasing atomic number. The magnitude of electron affinity generally decreases in the same direction.

EA values generally increase on moving left to right in a period of the periodic table. There are many exceptions to general periodic trends.

The EA trend for period-1 and period-2 elements of the periodic table are given below the picture, 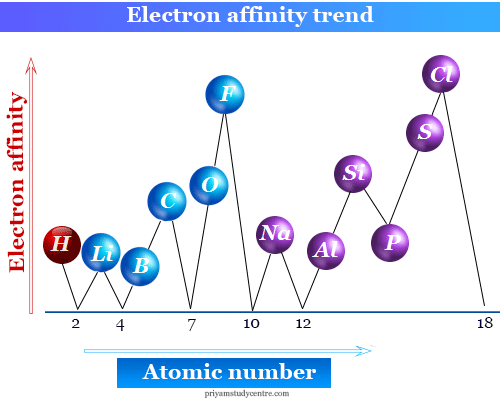 Electron affinity of lithium and beryllium

The atomic number and electronic configuration lithium and beryllium are,
Li: 1s2 2s1
Be: 1s2 2s2

Electron affinity of nitrogen and phosphorus

Nitrogen is small size atom compared to phosphorus. When nitrogen atom added an extra electron to the stable half-filled 2p subshell, some amount of energy is required for this addition. Hence the electron affinity of nitrogen is negative.

On the other hand, due to the bigger size of phosphorus compared to nitrogen small amount of energy is released when an electron is added to the stable half-filled 3p subshell.

Question: Why the electron affinity of fluorine is lower than the chlorine atom?

Answer: The lower values of the electron affinity of the fluorine atom are due to electronic repulsion in compact 2p-orbital. The affinities trends for halogen atoms are fluorine < chlorine > bromine > iodine.

Question: Why the electron affinity of beryllium and magnesium is almost zero?

The additional electrons will be entering in 2p-subshell of beryllium and the 3p-subshell in the case of magnesium. It resists the capture of electrons in a new higher quantum energy level.

Halogens like fluorine, chlorine, bromine, and iodine have a large affinity indicating the strong tendency to pick up an electron or act as powerful oxidizing agents.

These values clearly show that the E0 values of fluorine molecules are the highest. Thus fluorine is the strongest oxidizing agent.

The strongest oxidizing property is also explained by the small value of the chemical bond dissociation energy of fluorine molecules. Dissociation energies of non-polar halogens molecule are,

The valence shell electronic configuration of noble or inert gases like helium, neon, argon, krypton, xenon, and radon is ns2 np6 which is completely filled by the electrons. The incoming electron must go into the next higher energy level or principal quantum number. Therefore, the electron affinity values of noble gases equal to be zero.

In learning chemistry, the nuclear energy of noble gas is not high enough to hold an electron in new quantum energy levels, and electron affinity data of noble gas are unavailable.