What is electromagnetic radiation? 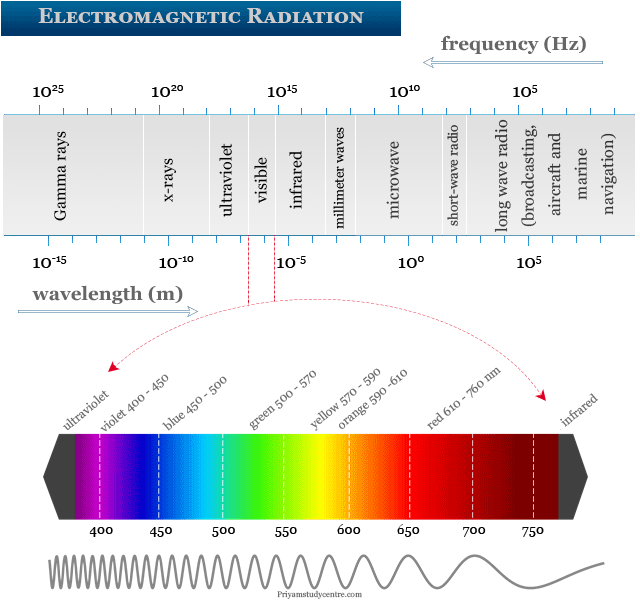 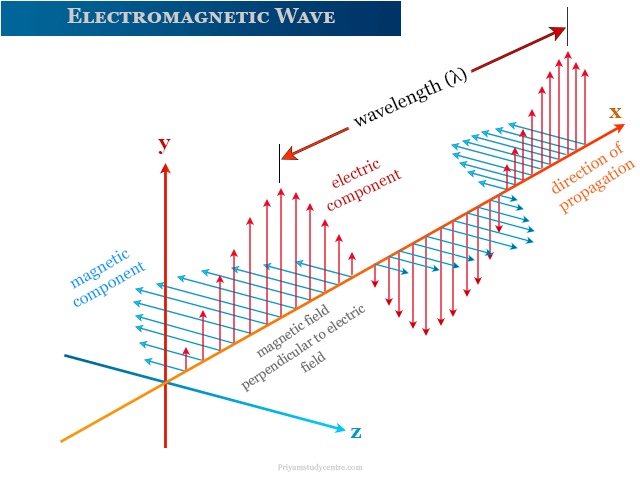 The number of complete wavelengths passing through a given point in unit time is called the frequency of electromagnetic radiation. It is denoted by the Greek letter ν. Frequency is the unit of reciprocal of time.

The frequency of electromagnetic radiation is generally expressed by cycles per second or Hertz (Hz) or Fresnel. By their definitions, wavelength and frequency are inversely proportional to each other.

Frequency is more fundamental than the wavelength of electromagnetic waves. It is defined as the number of waves per centimeter in a vacuum. Mathematically, wavenumber = 1/wavelength (λ). The wavenumber is generally used in infrared spectroscopy.

The velocity is dependent on the medium through which radiation passing. It has the unit of cm s−1 or m s−1.

The product of wavelength and frequency of electromagnetic radiation is equal to the velocity of the wave in the medium. Therefore, wavelength (λ) × frequency (ν) = velocity (c).

According to Planck’s quantum theory, the energy of the photon is proportional to the frequency of radiation. Electromagnetic energy is given the relationship,
E = hν
where ν = frequency of electromagnetic radiation
h = Planck constant = 6.62607004 × 10−34 m2 kg/s.

Gamma rays, x-rays, ultraviolet, visible, infrared, microwave, and radio waves are examples of electromagnetic radiation which contain a definite region of the spectrum.

Gamma rays are the shortest and most energetic waves in electromagnetic radiation. The main ways for the formation of gamma rays are nuclear fusion and nuclear fission reactions. Most of the gamma waves are generated by nuclear explosions, lighting, and the radioactive decay of substances.

Gamma rays are harmful radiation due to their high penetrating power. It can damage the bone marrow and internal organs of living organisms. Gamma rays are used mainly to sterilize medical equipment, tracers in medicine, and kill cancerous cells in radiotherapy.

X-rays are the type of electromagnetic radiation which absorbed or emitted by the movement of electrons close to the nuclei of relatively heavy atoms. Energetically, it is similar to radio waves, microwaves, visible light, and gamma rays.

It has enough energy to break down the molecules of living cells. X-rays are used mostly for medical imaging for the detection of bone fractures.

Ultraviolet radiation is non-ionizing radiation obtained mostly from the sun and other sources like mercury vapor lighting, fluorescent, and incandescent lights. It is beneficial for our health because uv radiation from the sun produces vitamin D.

Visible radiation or visible light is the form of waves with wavelengths between 400 to 750 nm. The approximate colour of visible light with their corresponding wavelength are given below the table,

Infrared radiation (IR) is a region of the electromagnetic spectrum where wavelengths lie between the visible and microwave region. The infrared waves are longer than that of visible light but shorter than that of the microwave.

Infrared radiation can be subdivided into three regions,

All the three sub-regions of infrared are part of the electromagnetic spectrum associated with the changes in the vibration of the molecules.

Infrared waves are used mostly in communication technology, spectroscopy, and astronomy. In spectroscopy, it is used for the structure determination of inorganic or organic molecules. It is also used as a source of heat energy in medical and different types of industrial production.

Microwave radiation lies between far infrared and conventional radiofrequency regions of the electromagnetic spectrum. Microwave spectroscopy deals with the pure rotational motion of the molecules. Therefore, it is also called rotational spectroscopy.

For microwave rotation, a molecule must possess a permanent dipole moment. The molecule having a dipole moment generates an electric field that can interact with the electric component of microwave radiation. The non-polar molecules such as hydrogen, chlorine, and methane are microwave inactive.

Microwaves are widely used in modern technology, for the study of various problems in physics, chemistry electronics, and astronomy. Particularly, it is very useful for structure determination.

Radio frequency wave is a part of non-ionizing radiation that arises due to the spin of the nucleus or electron. Radio frequency electromagnetic radiation is used widely in communication devices such as mobile phones, computers, broadcasting technology, aircraft, and marine navigation.