Electromagnetic spectrum radiation diagram and entire distribution chart represent the number of radiation spectra (frequency and wavelength) formed by the electrical field and magnetic field in quantum physics or chemistry. Each type of electromagnetic emission spectrum radiation like radio waves, ultraviolet (UV), infrared (IR), and visible rays travel at the speed of light in a vacuum with a wide range of frequencies, wavelengths, and photon energies.

Electromagnetic rays (quanta or photon ) in science can describe the two characteristics of radiation spectra, particle properties (mass, momentum, and velocity) and wave properties (energy, frequency, and wavelength) of the light spectrum. The various portions in the electromagnetic spectrum chart contain different types of names according to behavior and applications of radiation spectra like emission, transmission, absorption.

The shortest and longest wavelength of the electromagnetic spectrum radiation diagram defines the distance between two consecutive series of lines and express in si units like meters, millimeters, micrometers, or nanometers. 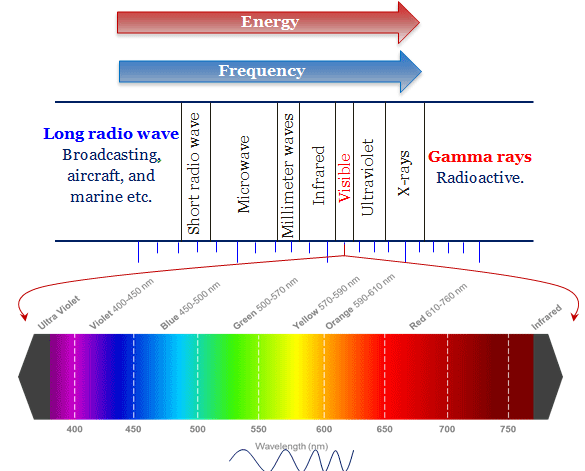 In addition to the wavelength scale, the frequency scale also uses to derive electromagnetic radiation for learning chemistry and physics. The frequency of the spectrum is defined as the number of complete cycles per second (cps), also name Hertz according to the name of German physicist H.R Hertz.

The classification chart of the electromagnetic radiation flows from cosmic rays to the microwave regions but the visible spectrum flows from the wavelength 400 nm to 750 nm or violet to red color. The below table includes different types of electromagnetic regions with frequency and wavelength of emission or absorption spectra.

Different types of spectrum examples on the above wavelength or frequency chart show that the visible region of spectra contains very small parts of the entire electromagnetic rays. Therefore, the waves of the visible region slightly higher than IR radiation and slightly lower than the ultraviolet spectrum.

The energy and wavelength of spectrum radiation are different for different substances (atoms or molecules). When the electromagnetic energy of the system does not match, then the light is not absorbed by the substances or atoms. Electromagnetic radiation in science uses widely to explain the most important physical or chemical properties and structure of inorganic and organic compounds or chemical elements present in the periodic table. Therefore, the electromagnetic model in spectroscopy widely uses in the field of science (chemistry, physics, biology, medicine, environmental analysis) in everyday life.

The uv-visible light brings the electron from lower atomic energy levels to higher energy to forms the atomic spectrum with a definite frequency and wavelength. In Infrared (IR) spectroscopy, the vibrational movements of the molecules change to form vibrational excitation among the molecules. In science, microwave spectroscopy changes the rotational movement of the chemical bond in the molecule to form an NMR-spectrum in the region of electromagnetic radiation.

What is chemistry? Formulas, solution, and definition for school college chemistry learning courses.
Contact us: [email protected]
© 2021 by priyamstudycentre.com