What are quantum numbers?

We have seen that the Bohr model could not explain the fine structure of the hydrogen spectrum. He indicates only one quantum number of an atom. In learning chemistry or physics, it is not sufficient to explain the absorption or emission spectrum of various atoms. Therefore, we need four quantum numbers to explain various spectral lines in an atom of periodic table elements.

How to find principal quantum numbers?

The principal quantum number (n) is always an integer having the value from 1 to ∞. The letter K, L, M, … are also used to derive the value of n.

How to find azimuthal quantum numbers?

The azimuthal quantum number (l) can have any value from o to (n−1) for a given value of n. The total number of different values of l is equal to n.

Total values of l for a given value of n define the total number of subshells present in the main energy level of an atom.

Bohr’s one electronic model could not explain the splitting of a single spectral line into a number of closely spaced lines in presence of a magnetic field or electric field.

According to Linde, the presence of more lines in the spectrum indicates that the energy levels are further subdivided. This subdivision gives an additional quantum number which is called magnetic quantum numbers.

How to find magnetic quantum numbers?

Magnetic quantum is denoted by the symbol ‘m’ or ml. The total values of m depend on the values of l. For a given value of l, m can have any integral value between +l to −l.

When spectral lines of hydrogen, lithium, sodium, and potassium are observed by the instrument of high resolving power, each of the lines of the spectral series was found to consist of a pair of lines known as a double line structure. To identify these double line structures, another quantum number is necessary. It is known as a spin quantum number.

According to Uhlenbeck and Goudsmit, the electron moves around the nucleus or rotates around its own axis either in a clockwise or anticlockwise direction.

How to find quantum numbers?

Question: What are the four quantum numbers of the 19th electron of chromium in the periodic table?

Question: Identify the correct set of quantum numbers for the valence electron of rubidium.

Answer: The correct set of four quantum numbers for the valence electron of the rubidium atom, 5, 0, 0, +½.

Question: How many electrons in an atom have the following quantum numbers n = 4 and l = 1?

Answer: 6 electrons in an atom have the following quantum numbers n = 4 and l = 1.

Question: How many possible numbers of orbitals of an atom when the principal quantum number is equal to four?

Answer: With these quantum numbers set the number of possible orbitals equal to one.

Atomic orbitals define the basic building blocks of an atom where an electron can stay. According to the wave model, an orbital is defined as a region in space where the probability of finding an electron is maximum.

It is difficult to represent the pictorial representation of an orbital on two-dimensional paper. It is generally represented by a shaded figure where the intensity of shading is proportional to the probability of finding an electron in the shading space.

According to the wave model in quantum mechanics, the wave function of the electron in an atom is called orbital. The probability of finding an electron in space around the nucleus involves two orbitals aspects,

Shape of s-orbital in atom

For s-orbital, l = 0 and m = 0, it indicates that s-orbital has only one orientation. Therefore, the electron cloud distribution in s-orbitals has spherically symmetrical. 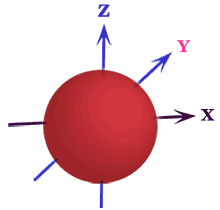 The s-electron has no angular dependence because the relevant wave function is independent of angles θ and Φ. Therefore, an equal chance of discovering the electron in any direction from the nucleus.

Shape of p-orbitals of an atom

For p-orbital, l = 1 and m = −1, 0, +1. Therefore, the p-orbitals have three orientations represented as px, py, and pz. The orbitals designation px, py, and pz are mutually perpendicular to each other. They are concentrated along their respective coordinate axis x, y, and z.

The two lobes of a p-orbital can be separated by a plane containing the nucleus of an atom. Such type of plane is called a nodal plane. Such a plane has zero electron density.