What is Kinetic Theory of Gases?

Kinetic theory of gases and kinetic gas equation first-time developed by Bernoulli in 1738 to derive the molecular properties of gas molecules on the basis of the ideal gas law and mechanical energy. Molecules in the gaseous state of matter move at very large speeds and the forces of attraction are not sufficient to bind the molecules in one place which is given below the picture, 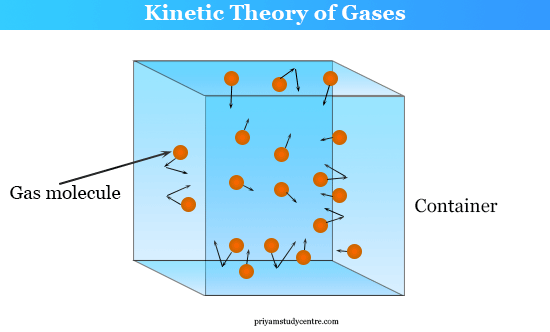 In the nineteenth century, the effort of Joule, Kronig, Clausius, Boltzmann, and Maxwell, gives the postulates and formula of the kinetic gas equation on the basis of root mean square velocity (RMS) and momentum of the gas molecule.

Solid molecules or particles are held very closely together and are entirely devoid of any translatory motion. When a specific heat is supplied to a crystalline solid, it takes the form of vibrational motion with the rise of temperature.

Further increases the thermal energy, the vibrational motion rises, and the molecules break down to transform into a liquid state like ice to water.

When the thermal energy is much greater than the forces of attraction, then we have a gaseous state of matter.

Postulates of Kinetic Theory of Gases

For the study of physics and chemistry, the kinetic theory of gases consists following postulates or assumptions, 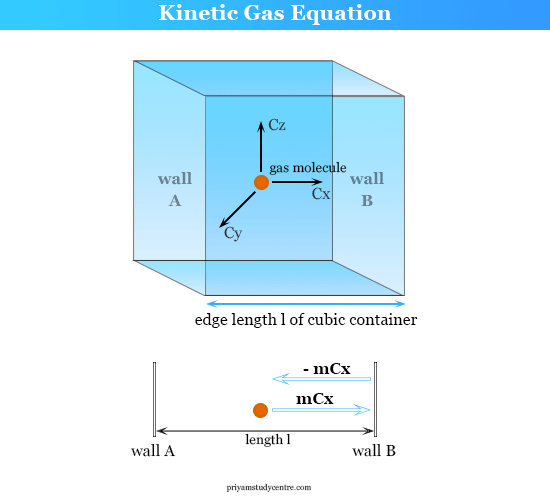 If the molecule will collide walls A and B of the container with the component velocity Cx and other opposite faces by Cy and Cz. Therefore, the change of momentum along the X-direction for a single collision,
= m Cx − (− m Cx)
= 2 m Cx.

According to Newton’s second law of motion, the rate of change of momentum due to wall collision is equal to the force developed within the gases.

The kinetic gas equation derived from the kinetic theory of gases uses to calculate the root mean square velocity and density of the gas molecules. It is valid for any shape of the container of our environment.

Root mean square speed or RMS is defined as the square root of the average of the squares of speeds of the gases. The kinetic gas equation and ideal gas law may be used to formulate the RMS velocity of the gases.

From the above equation, root means square velocity (RMS) depends on the molar mass and temperature of the gases. Therefore, at a given temperature RMS velocity decreases with the increasing molecular weight of gas molecules. Hence the RMS velocity of the hydrogen molecule is four times greater than the oxygen molecule.

Therefore, the average kinetic energy is dependent on temperature only but independent on the nature of the gases.

Question: Calculate the average kinetic energy for hydrocarbon like methane gas at a temperature of 27 ⁰C.

This energy equation calculates the necessary deductions of gas law like Boyle’s, Charles’s, and Avogadro’s law.

From this equation, PV = 2Nk’T/3. When the pressure is kept constant, V ∝ T because N and k’ have constant values. Therefore, at constant pressure, the volume of the gas is proportional to its kelvin temperature. This is Charles’s law.

When the temperature is kept constant, PV = constant. Therefore, the volume of the gas is inversely proportional to its pressure. This is the Boyles law. The kinetic molecular theory or gas equation is also used to calculate the kinetic energy, density, diffusion, or effusion of gas molecules.