Hydrogen spectrum (absorption or emission) is an impotent type of tool for the determination of the atomic structure of chemical elements or atoms in quantum chemistry or physics. Bohr Model explained the existence of various electromagnetic spectrum lines in the hydrogen atom for the spectroscopic study.

The calculation of the atomic emission or absorption spectrum is feasible in quantum chemistry or physics because each hydrogen energy level has definite energies in which the electron particle can stay. When the value of the principal quantum number increases the energy values for orbits become closer to each other.

The absorption energy corresponding to the electronic transition spectrum from n = ∞ to n = 1 gives the ionization energy of the hydrogen atom.

On the addition of thermal energy or electrical energy, the electron moved to the higher energy level or higher energy orbital of an atom. When this excited electron returns to the ground state it forms the following emission spectrum diagram for the hydrogen atom with a definite frequency of radiation. 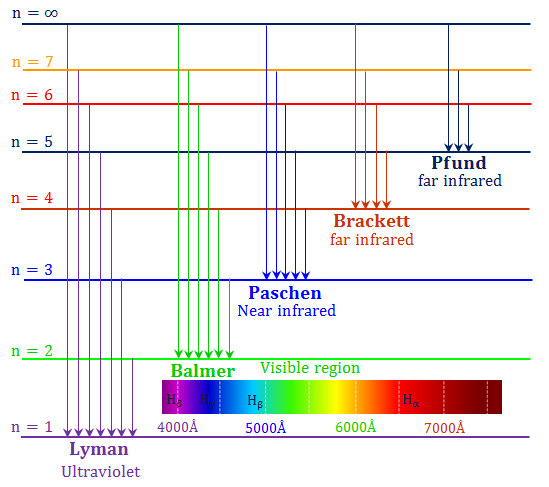 In 1901, Planck’s quantum theory proposed a formula for the electromagnetic radiation. He connected photon energy and frequency of the emitted light for the chemical elements in the periodic table.

The energy corresponding to a particular line in the emission and absorption spectra or spectrum of hydrogen is the energy difference between the ground level and the exited level.

But the frequency of emitted light from the electromagnetic spectrum is related to energy by the plank equation,
ν = ΔE/h

With the help of this formula, we can calculate the frequency, wavelength, and wavenumber of the line observed in the hydrogen spectrum.

The spectrum equation of hydrogen uses to measure the values of the Rydberg constant for hydrogen in learning chemistry or quantum physics.

The frequency (ν) in the spectrum indicates the number of waves passing a given point per second and is expressed as cycles per second in chemistry or physics.

Wavenumber in hydrogen spectrum data is defined as the number of waves connected in CGS or SI unit length that is per centimeter (cm−1) or per meter (m−1).

The experimental value of the Rydberg constant for hydrogen spectrum is equal to 109737 cm−1 or 10973700 m−1. It slightly varies from atom to atom depending upon the nuclear mass.

According to the name of the discoverer, the transition from the ground state to excited states constitutes the following spectrum series for the hydrogen atom,

The emission spectrum lies from the ultraviolet region to the far IR region obtained by putting the values of n1 and n2 in the Rydberg equation.

The longest or shortest wavelength or frequency of different spectral lines represent in the below table,

The explanation of the emission and absorption spectrum data for one electronic system like hydrogen atom or helium (He+) and lithium-ion (Li+2) by Bohr theory or model has some limitations.