How wavelength is measured?

Wavelength can be measured by the distance between two successive maxima of a wave. It can be denoted by the symbol lambda (λ) and calculated by the formula λν = c, where ν = frequency and c = speed of the wave. Sound, light, water, and electromagnetic waves are the most common examples of waves whose wavelength depends on the medium where they are traveled. 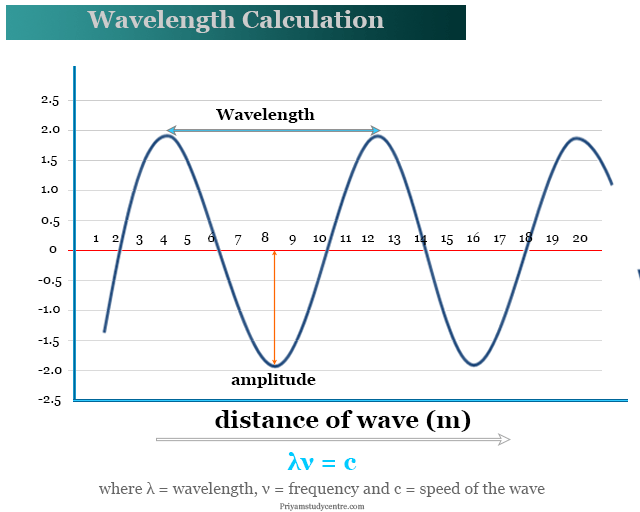 A sound wave depends on the air pressure whereas electromagnetic radiation depends on the strength of the electric and magnetic fields. Generally, we use a photometer for the calculation of energy, wavelength, and frequency of light waves.

The number of complete wavelength passing through a given point in unit time is called the frequency of radiation. It is denoted by the greek latter ν and measured by the unit reciprocal to time.

When the density of the medium through which the wave is passing decreases, the wavelength and velocity of radiation increase. It reaches a constant or maximum value in a vacuum. Therefore, the velocity of light in a vacuum is denoted by the formula, c = λν, where, c = 3 × 108 m/s.

In physics, sound is an acoustic wave that propagated through a medium such as a gas, liquid, or solid. The velocity of sound waves in air is 343 m/s at room temperature and atmospheric pressure. The wavelength of sound which is audible to the human ear is between 17 m to 17 mm. Some higher wavelength of a sound wave is used by bats to identify their targets.

The speed and wavelength of sound waves depend on the medium where sound is travelers and the temperature of the medium. The speed of sound in a different medium is given below the table, 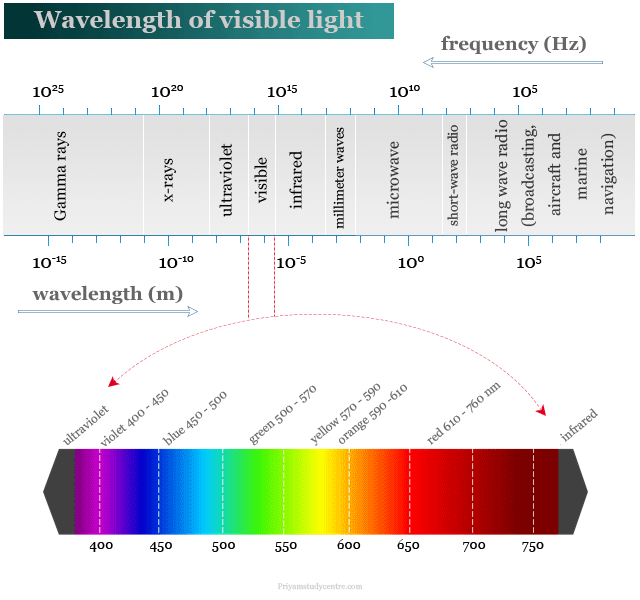 Radiation which we called light is the visible portion of the electromagnetic spectrum. It lies between the wavelength 400 nm (violet) to 750 nm (red). Within the visible region, a person with normal color vision can be able to correlate the wavelength of light striking the eye. The color of light corresponds to different wavelengths is given below the table,

The dual nature of light or electron was first proposed by the de Broglie equation in 1924. A light wave must have energy, wavelength, frequency, velocity, and amplitude. Experimentally, the velocity of all electromagnetic radiation is found to be the same 3 × 108 m/s in a vacuum. Again the bundle of energy emitted by light is called a photon. The wavelength and frequency of light can be measured by the following equation,

The calculation or conversion of wavelength to frequency and energy of photons was suggested by Planck. According to Planck’s quantum theory, if a photon energy E is emitted or absorbed with frequency = ν and wavelength = λ, E = hν = hc/λ.