Rutherford model of an atom 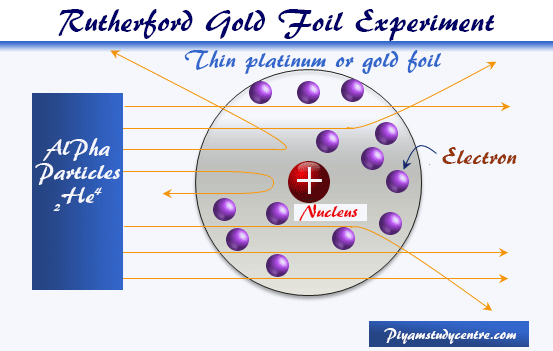 The presence of free charge electrons observed by Rutherford in the gas discharge tube established the fact that metals on specific heat give off electrons. Therefore, the negatively charged electron particles are present in the atoms but the whole atom is electrically neutral.

The direction of motion of α-particles after emerging from the thin metal sheets was traced on a fluorescent screen.

Ernest Rutherford concluded some points from his gold foil experiment to describe the nuclear planetary model like the solar system of our universe.

From the above conclusions, Rutherford proposed an atomic model for learning chemistry or physics in atomic science.

According to the Rutherford model, the entire mass of the atom is concentrated in a tiny positively charged nucleus. These electrons move around the nucleus in different orbitals constantly otherwise the electrons fall on the nucleus. An atom is divided into two parts according to Rutherford,

For an example of the hydrogen atom, one electron moves around the nucleus but other elements like nitrogen, oxygen, fluorine contain shielding electron.

According to the Rutherford atomic model, almost the entire mass of the atom is concentrated in a very small central core called the nucleus of an atom.

When the electron moves in circular orbits or energy levels around the nucleus, the Coulombic attraction is balanced by the centrifugal force of attraction. Otherwise, the electrons fall on the nucleus. Therefore, Rutherford’s arrangements are quite similar to the solar system model in our environment.