What is nuclear reaction?

Nuclear reaction in physics and nuclear chemistry is the types of natural splitting of heavy nuclei accompanied by the emission or splitting of particles like alpha, beta, gamma in the form of energy. Nuclear scientists find the ways of artificial radioactive decay of stable periodic table elements. Rutherford in 1919 shows that alpha ray bombardment on nitrogen produces an isotope of oxygen and proton. 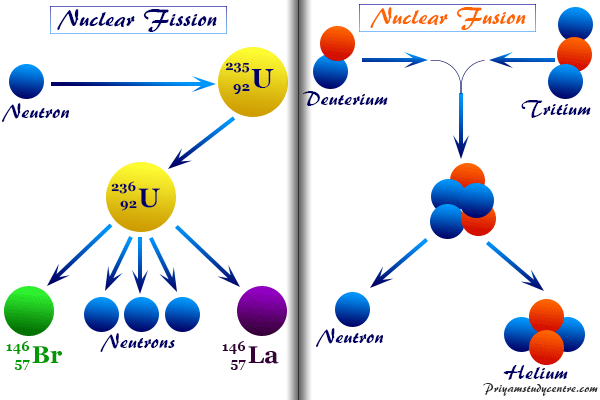 When the total atomic mass of the products is less than the initial participants of nuclear reactions, energy will be given out. It may be calculated from the Einstein equation, E = mc2.

Not only alpha-particles but other accelerated particles like protons, neutrons, and deuterons are extensively used to obtained artificial radioactive elements. Some examples of nuclear reactions are given below the table,

For more details about nuclear fission of nuclear fusion, read the following topics,

What is nuclear fission? Nuclear fission is a nuclear reaction where a heavy nucleus of an atom is split spontaneously to produce two or more smaller...
Read more

What is nuclear fusion? Nuclear fusion is a nuclear reaction where very light nuclei of chemical elements could be joined or fused to form heavier...
Read more

What is nuclear fission?

The disintegration of heavy nuclei breaks up into two nuclei of comparable masses is called nuclear fission. The energy released in the fission of nuclei originates from the loss of mass occurring in the process.

What is nuclear fusion?

On the other hand, if the light nuclei would be joined or fused together, there would be a loss of mass. Such a fusion process would lead to the liberation of energy. For example, if two protons and two neutrons would be fused in a nuclear reaction, the loss of mass is converted into energy which is very high.