Thiamine or vitamin B1 is one member of the water soluble vitamin B complex found naturally in some foods or sold as a supplement. The deficiency of thiamine causes beriberi in humans. Therefore, it has antidiuretic properties. Rice polishing, yeast, and eggs are rich sources of thiamine or vitamin B1. It is required for the metabolism of glucose, amino acids, and lipids. 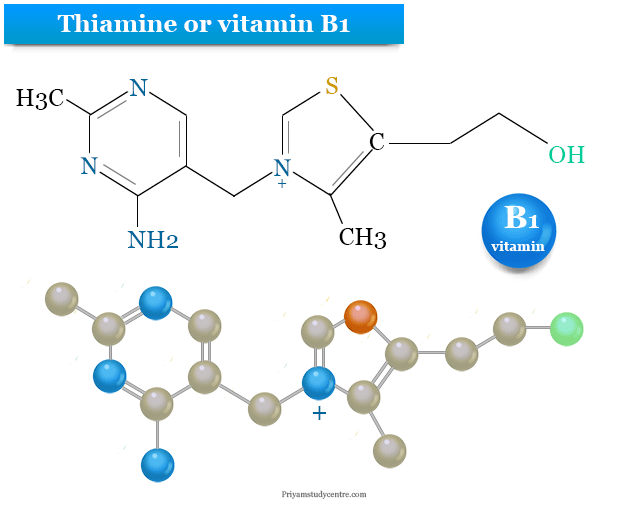 Thiamine occurs in all cells and plays an important role in the growth of the human body and controls various cells functions. It cannot be stored or produced by the human body. Only a small amount of thiamine can be stored in our liver. Therefore, we need to intake thiamin-rich foods in our daily diet.

It is a colorless crystalline organosulfur compound with the chemical formula C12H17N4O. It is soluble in water, methanol, and glycerol and insoluble in less polar organic compounds.

The structure of thiamine contains an aminopyrimidine and thiazolium ring linked by a methylene bridge. When chloride salt of thiamine is treated with sodium sulfite saturated with sulfur dioxide at room temperature, it forms the following compounds,

The compound C6H9NOS obtained from thiamine chloride hydrochloride shows basic properties. The nitrogen atom in C6H9NOS is in a tertiary state. The functional nature of the oxygen atom is shown to be alcoholic.

The compound C6H9N3O3S is a pyrimidine derivative that contains a sulfonic group. When C6H9N3O3S is reduced with sodium in liquid ammonia, a sulphonic acid group is eliminated to form amino-dimethyl pyrimidine.

It is used to treat thiamine deficiency which causes beriberi in man. Beriberi causes muscle loss and decreases feeling in the hands and feet. Other well-known disorders caused by vitamin B1 deficiency are Wernicke–Korsakoff syndrome, optic neuropathy, Leigh’s disease, African seasonal ataxia, etc.

A thiamine deficiency in the United States and other well-developed counties are very rare because most of the peoples in these counties intake a sufficient amount of vitamin B1 in their daily diet. The most common signs of vitamin B1 deficiency are,

Other serious thiamine deficiency disorders like Wernicke–Korsakoff syndrome are caused by a high intake of alcohol. It may cause memory loss, muscle coordination loss, and peripheral neuropathy.

The risk of deficiency increases for the person who suffers from HIV/AIDS or diabetes or bariatric surgery. Doctors can treat thiamine deficiency by injecting a high dose of supplements through the vein with a balanced foods diet.

It is an essential micronutrient for the growth and health of the human body. It is found naturally in several foods like whole grains, meat, and fish. Whole grains, legumes, pork, fruits, and yeast are rich sources of thiamine.

It can be added to breads, cereals, and baby foods in the United States and many other countries to fulfill the deficiency of thiamine or vitamin B1. The most common vitamin B1 rich foods are,

How to get thiamine?

It was discovered in 1897 and made first in 1936. It is an Essential Medicine according to World Health Organization. The structure of thiamine has been confirmed by its synthesis. It can get by the following process given below the picture, 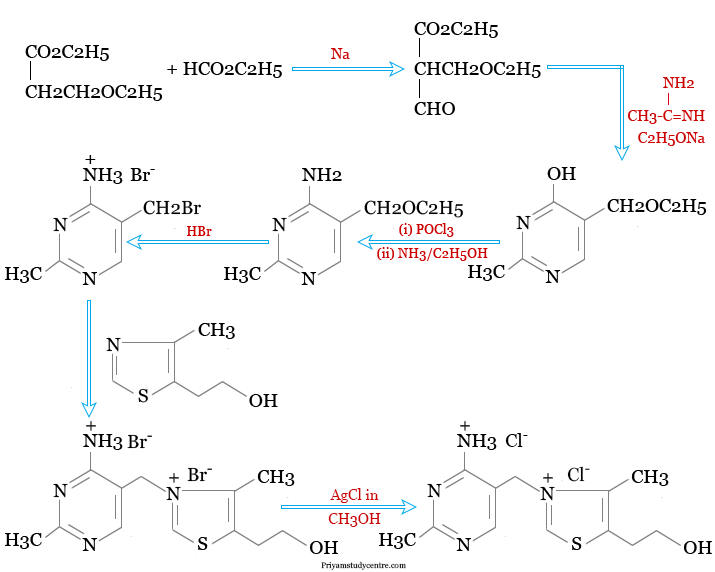 Above synthesis methods have been used commercially production of vitamin B1.

The best way to get thiamine for our health, we need to intake it from daily dietary food sources. Several types of vitamin B1 supplements can be sold on the market.

Recommended Dietary Allowances (RDAs) of vitamin B1 for the United States are given below the table,

What is thiamine used for?

We used several types of foods like yeast, cereal grains, beans, nuts, and meat in our daily diet which contains a rich amount of thiamine. It is important for us to break down carbohydrates into energy.

What is polarimetry? Polarimetry in analytical chemistry is a method for measuring the rotatory power of a substance by the instrument polarimeter. Many transparent non-symmetrical...